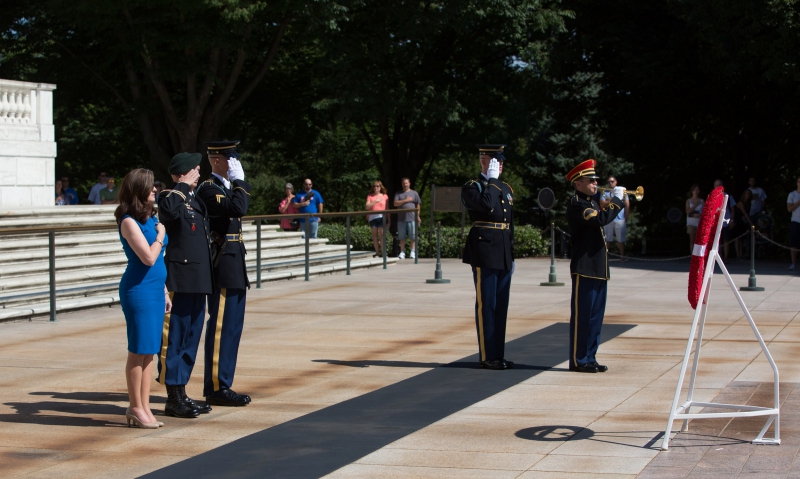 American Legion member and Volunteer Director for Soldier’s Wish, Mark Ochsenbein, and his wife Sherrie, lay a wreath at the Tomb of the Unknowns at Arlington National Cemetery. Photo by Greg Kendall

Legionnaire and Volunteer Director for Soldier’s Wish, Mark Ochsenbein, laid a wreath at the base of the Tomb of the Unknown Soldier July 11 on behalf of Soldier’s Wish. American Legion Department of Virginia Commander Dave Stein and Vice Commander Frank Hillyard represented the Legion while placing a similar wreath July 12.

The Legionnaires said their trips to Arlington Cemetery were unlike any other time they previously visited the hallowed grounds.

“When I was asked to lay the wreath I jumped on the opportunity,” Stein said. “How can you say no?”

“Since our inception nearly 100 years ago, The American Legion has relied on membership dues to drive our revenue and support our programs,” Krupa said. “There is always a need to do more. Our fundraising efforts go above and beyond to do more for our country’s veterans and their families.”

The $444,000 raised through The American Legion’s mail campaign will be funneled directly into Legion programs that support veterans, servicemembers and their families. The fundraising effort was especially meaningful to Stein, who holds a special place in his heart for programs like American Legion Baseball, which he participated in during his childhood.

As he placed the Legion’s wreath – made with more than 35,000 satin roses – on the stand in front of the tomb along with Hillyard, Stein said he felt an overwhelming sense of pride during the ceremony, especially when the soldier guarding the tomb announced The American Legion. This was the first official ceremony Stein participated in after assuming his duties as department commander July 9.

“It was an honor to have this once-in-a-lifetime opportunity,” he said. “I can’t think of a better way to show our appreciation to the donors that support The American Legion. Without them, we could not continue to support our mission. There is a heartfelt appreciation that comes along with what they allow us to do.”