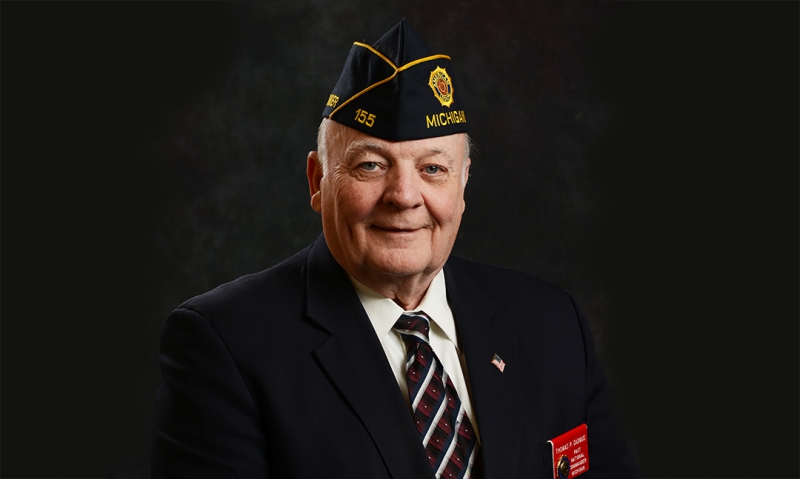 In his final Commander’s Message for The American Legion Magazine, then-National Commander Thomas P. Cadmus chose to reflect on what his view of The American Legion was. Rather than it being offices in Indianapolis or Washington, D.C., the organization was “a diverse and dedicated assortment of nearly 15,000 unique posts where veterans don’t need to consciously think much about ‘national’ because they’re busy making differences in their hometowns.”

Cadmus wrote of the Legionnaire coaching a Legion Baseball team, volunteering at a Department of Veterans Affairs facility or fundraising to purchase phone cards for troops deployed overseas. It was those Legionnaires – the ones working at the grass-roots level – who drove the Legion, Cadmus said. And as national commander from 2004-2005, and long after his tenure ended, he was as comfortable talking with them as he was leaders in the U.S. government, military and VA.

“He was a great believer in the grass-roots efforts of The American Legion to accomplish (its) mission,” said Past National Commander Robert W. Spanogle, who had a friendship that spanned more than 40 years. “Tom was never a stranger to anyone. His hand was always out offering friendship and good counsel. He just was a great friend to everybody, and treated everybody with respect and dignity. Rank didn’t matter to Tom.”

Spanogle said Cadmus, who passed away July 25 at age 69, also was quick to share credit and praise with his fellow Legionnaires. Spanogle – who served as national adjutant while Cadmus was in office – recalled the 2005 American Legion National Convention in Hawaii. The Legion had passed Resolution 169, which urged all Americans to stand united in the global war on terrorism and united in support of the troops fighting that war.” While the convention was in session, President George W. Bush called Cadmus to thank him for passage of the resolution.

“You know what Tom Cadmus did?” Spanogle said. “He said, ‘Mr. President, if I can patch you through to the (convention) hall, to the 2,000 delegates out there that passed this resolution.' He said that was the highlight of his year. He was thanking the 2,000 delegates at that convention. That’s the kind of guy he was.”

Spanogle and Cadmus both were Legion Riders, taking motorcycles to the Sturgis Motorcycle Rally in South Dakota and traveling the Tail of the Dragon route from North Carolina to Tennessee.

Along the way, he struck up friendships with Legionnaires like Past National Commander Daniel Ludwig. Their relationship spanned 28 years.

“He was a man with a great passion for The American Legion and its aims and programs,” Ludwig said. “And he was very passionate about the Michigan American Legion, also.”

Ludwig saw both the business and lighter sides of Cadmus. “While he could be intense about the work of the Legion, at the same time he could have a great sense of humor,” he said. “He was easy to be with and fun to be with. He was an all-around good guy."

Past National Commander Jake Comer also knew Cadmus for years. “Tom was a great national commander, and a very humble guy who treated everybody with respect,” he said. “I went to Michigan a few years back to speak, and they all loved him dearly. He was just the best person.”

Spanogle will attend Cadmus’ funeral. “I expect he’ll have one of the largest funerals I’ve attended,” he said. “He knew everybody.”

Cadmus is survived by his daughter Nicole (Joe) Coughlin, son Brian Cadmus, both of Tecumseh, his brother Russell, sisters Eleanor Mueller and Charlotte Patterson of Adrian, and his grandchildren, nieces and nephews.

Visitation for Cadmus is from 4 p.m.-8 p.m. today at the Tecumseh Chapel of Handler Funeral Homes, 313 W. Pottawatamie St., Tecumseh, Mich. An American Legion and 40/8 veteran service will take place at 7 p.m.

A memorial service is scheduled for 3 p.m. Thursday at the funeral home, with visitation from 2 p.m. until the service. Inurnment will follow at Ridgeway Cemetery, M50 Ford Hwy, Tecumseh. Memorial contributions can be made to the Michigan American Legion Wilwin Lodge at Cyget Cove, 212 N. Verlinden Ave., Lansing, MI 48915.

In a 2014 interview with American Legion media staff, Past National Commander Thomas P. Cadmus talked about his year as national commander, the Legion Riders and patriotism. Click here to view the interview.