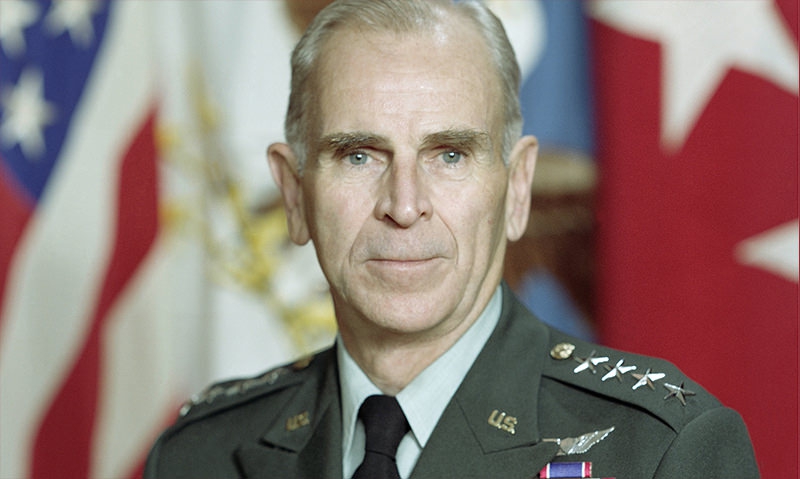 If any senior officer could be included in a “Grunt Hall of Fame” or in a “Best Person Hall of Honor,” it would be Vessey. I worked for him directly at the Pentagon and at a distance in Grenada. Each encounter reinforced my personal belief that he was truly someone special. Let me explain.

Gen. Vessey faked his birth records to join the Minnesota National Guard at the age of 16 in 1939. During the Battle of Anzio in World War II, he made his first great mark.

The German panzers had broken through and portions of the assault force made it to part of the beach. This was a moment when Commanding Gen. Mark Clark considered withdrawing from the lodgment.

1st Sgt. Vessey was acting as chief of smoke in his artillery battery, which was directly astride the German advance. With the bulk of the leadership dead or wounded, he took charge of his position, lowered the guns to zero elevation and broke the back of the tank attack. Vessey was awarded the Distinguished Service Cross for his actions and commissioned as a second lieutenant.

During his service in Vietnam, then Lt. Col. Vessey performed a near re-enactment of Anzio at Suoi Tre (LZ Gold) on March 21, 1967. The following is written from a first person observation as related to me.

Lt. Col. Vessey commanded a 105 artillery battalion that was inserted at Suoi Tre on March 19. The location was in the center of a Viet Cong main force element and both sides immediately began exchanging fire throughout the period. On the night of March 20-21, the fire support base was hit with a reinforced regiment of main force Viet Cong, augmented by a heavy weapons regiment and additional infantry. The base was entirely isolated from reinforcements at the time.

The tanks, without accompanying infantry, made a trail through the dense spongy jungle as there was no road. Finally around 7:30 a.m. on the 21st, the lead tanks of Commanding 2nd Battalion, 34th Armor broke through into Gold.

The base was at the point of being overrun from 360 degrees and the bad guys were inside the wire. All the 105s were at zero elevation firing beehive as fast as they could be loaded. Vessey went to each gun position and instructed the gunners on how to crimp the fuses on high-explosive rounds so they would explode less than 30 meters from the barrel.

Vessey, in coordination with the infantry leadership, went to the infantry bunkers moving troops to compensate for the casualties and encourage them. The infantry battalion security force was reduced to less than half strength and many of the gun bunnies were using their small arms close in.

The armor, attacking without infantry, fired canister in the rear of the attackers with the armor company commander, Cpt. Kimmerling, determining that the risk to the fire support base troops was greater if he did not use canister in their direction.

The after action report of the 25th Infantry Division summarized the situation. The situation inside Fire Support Base Gold had by this time become so critical that howitzers within the perimeter were lowered to fire directly into the waves of advancing enemy soldiers. The tenaciously held perimeter of the fire support base had been penetrated in the north and southeast by 7:51 a.m. During this penetration, the enemy succeeded in overrunning and destroying one M-55 Quad .50 caliber machine gun and actually penetrating one of the howitzer positions. The other Quad .50 MG had been destroyed by an anti-tank round during the initial attack. In all, two howitzers were destroyed by mortar and anti-tank rounds, and nine others were damaged. Additionally, many of the more than 500 rocket-propelled grenade anti-tank rounds, which were fired into the support base, landed in the ammunition stores.

In spite of the withering small arms fire and the exploding stores of 105mm ammunition, the gun crews remained at their guns, cannibalizing the destroyed howitzers to keep the damaged ones firing. Crew members from destroyed guns carried ammunition and steeped in to fill vacancies as casualties occurred in the operation crews. All cooks, clerks and other available personnel of the artillery battalion, which had been formed into a preplanned reaction force, moved to block the penetration of the infantry’s perimeter. By this time the infantry soldiers on the perimeter of the fire support base, who were subjected to the brunt of the assault, were fighting from isolated positions as the determined enemy force penetrated and encircled the United States defensive positions.

Small elements of the U.S. soldiers fighting fiercely in hand-to-hand combat continued to resist the assaulting enemy. As the fighting intensified and ammunition stocks depleted, friendly troops reacted quickly to the situation, seizing weapons and ammunition from the dead and wounded enemy. During the course of the action, the penetrating Viet Cong threatened the command post of the 3rd Battalion, 22nd Infantry and the Fire Direction Center of the 2nd Battalion, 77th Artillery. These positions were successfully defended, however, and the enemy assault was repulsed after suffering numerous casualties.

Twenty-six dead Viet Cong soldiers were found within 50 meters of the artillery Fire Direction Center. By the time the relief force reached the scene of the battle it was estimated that over half of the troops on the eastern portion of the perimeter had exhausted their own ammunition and were using captured AK-47s and Chicom carbines.

The Viet Cong attacked the moving armor with satchel charges and by mounting on the passing tanks, attempting to blind the drivers and gunners. The tanks mutually cleaned off each other by firing flechette rounds and 7.62 sweeping the tanks clear. Finally, they ground up and drove off the attackers and surrounded the fire support base.

Cpt. Kimmerling was greeted by Lt. Col. Vessey carrying an M16 and thanking him for arriving like the cavalry in the movies.

The Distinguished Service Cross was awarded to Vessey “for extraordinary heroism in connection with military operations involving conflict with an armed hostile force in the Republic of Vietnam, while serving with 2nd Battalion, 77th Artillery, 3rd Brigade, 4th Infantry Division. Lt. Col. Vessey distinguished himself by exceptionally valorous actions on March 21, 1967, while serving as a battalion commander during a combat mission near Suoi Tre. During the early morning hours, Col. Vessey's battalion received a massive assault by a Viet Cong regiment. Although more than 200 mortar rounds fell, Col. Vessey fearlessly moved through his unit area, first to alert his men, then to direct various phases of the defense. When vital howitzer positions were destroyed by hostile fire, he rallied men from other sections to man the guns, and he himself assisted as a cannoneer. He was wounded during this action, but continued to lead and fire the artillery pieces. At one point, he spotted Viet Cong rocket launchers that were placing devastating fire into the battery perimeter. He seized a grenade launcher, moved into an open area and knocked out three of the insurgents' weapons. When an enemy tracer round ignited a drum of diesel oil and threatened to set off two drums of explosives nearby, Colonel Vessey ran to that highly dangerous point and helped move the drums to safety. His professional command and courageous fighting throughout the battle were instrumental in turning back the numerically superior enemy force and killing more than 600 Viet Cong. Lt. Col. Vessey's extraordinary heroism and devotion to duty were in keeping with the highest traditions of the military service and reflect great credit upon himself, his unit, and the United States Army.”

I worked for Gen. Vessey directly when he was vice chief of staff of the Army, and we built the special operation forces that we enjoy today after the failure of the Iran rescue. I was aware of the basic data regarding his history but knew nothing of the man himself.

On numerous occasions and under great personal risk and stress, Vessey demonstrated his care and affection not only for soldiers but also for doing the right thing – difficult as that was with less productive choices available. In his time as chairman of the Joint Chiefs of Staff, he visited my unit in Grenada and established an immediate and mutually respective bond with the troops. He cared little for the senior meetings and briefings; he cared a great deal of how each soldier was doing and what he or she needed to do their job better. And he was 100 percent sincere.

Above all, Jack Vessey was a great soldier and a truly great man. He is and was a man every grunt in uniform would welcome to his perimeter.