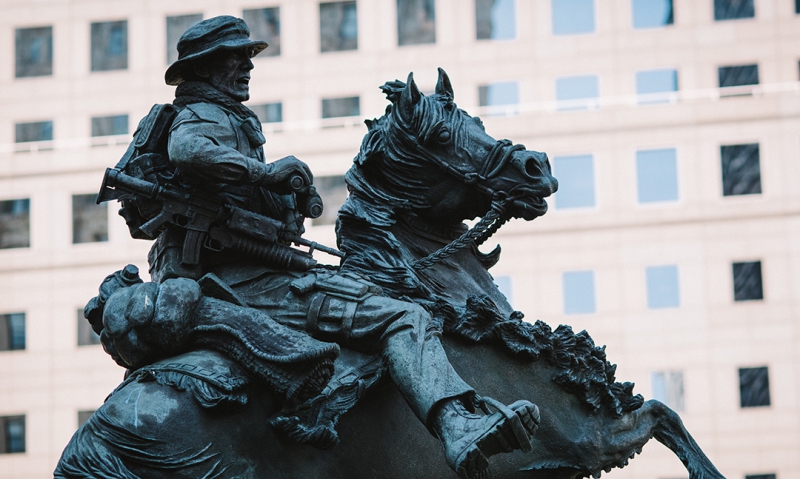 Visitors will no longer have to peer through a 12-foot, chain-linked fence at the World Trade Center to view America’s Response Monument, otherwise known as the Horse Soldier Statue.

“The statue marks both tragedy and triumph,” said Bruce Mosler, a New York City businessman, veterans supporter and member of the Sons of The American Legion. “Two days ago we marked the 15th anniversary of the horrific attack on our soil. Terrorists struck a blow to our beloved city. That beautiful day was marked by smoke, death and destruction. And many innocent lives from many nationalities, many religions and all walks of life. It demanded a response — from the Special Forces troops and first responders who rushed to help others with no regard for their own safety.”

The monument honors the group of elite soldiers — Task Force Dagger — who dropped into northern Afghanistan then rode horseback as the United States took down the Taliban in the aftermath of the 9/11 terrorist attacks.

Retired Air Force Chief Master Sgt. Calvin Markham was among the first to deploy to Afghanistan. “I had the awesome opportunity to be one of the first airman assigned to the Special Forces team in the early parts of October 2001,” he said. “It was a great opportunity to be that airman who brought special airman skills to a team with a lot of amazing and diverse specialties all for a specific cause, one fight.”

For Markham and others, the dedication of the Horse Soldier Statue — a Green Beret on horseback — represented part remembrance, part celebration and part reunion.

“It is an honor to be here today with my Special Forces brethren,” said the former special operations combat controller. “We have been talking about the obstacles we overcame. In 2001, we went back to real traditional warfare, getting to anyplace at any time via horseback. The horse soldier really symbolizes the ability to adapt to whatever environment we are in and conquer the enemy. It’s such a beautiful statue.”

The ceremony was held on a gorgeous, cloudless, warm Tuesday morning in September in New York City — very similar to the day 15 years and two days ago when terrorists struck at the heart of the city.

On 9/11, Doug McGowan was in Marine Corps training in Quantico while his mother was a United Airlines flight attendant and his father was in downtown Manhattan, watching the first tower fall.

“Although none of us chose to be where we were on that fateful day, we all chose how we would respond,” said McGowan, chairman of the United War Veterans Council. “Americans rallied around each other, reinvigorating our communities to rise from the ashes.

“And our volunteers saw fit to stand and fight, and who continue to run toward the sound of fire to this day. As our warriors keep us safe at home and away, take a moment to honor their service by recalling the camaraderie that we all felt and experienced after 9/11.”

“Like the Doolittle Raiders who struck back in response to Pearl Harbor or the Marines threading the needle in Inchon Harbor to lead a counter-attack in Korea, we saw in the servicemen and women in Task Force Dagger our own ideals, our commitment to action and commitment to each other and commitment to America’s response.”

For Mosler and others who helped locate a permanent site for the memorial, the ceremony was the culmination of years of work.

Mosler, a member of the Sons squadron affiliated with Post 2001 in New York City, was among civilians who raised the funds and helped locate the permanent home for the statue, which is one and a half times life size and cast in bronze.

“I feel it is important for those who served to have a place to go and remember their fallen friends,” Mosler said. “And I think this is going to be unlike other memorials in that it will be a place where people want to come just because of what it means, its position looking over the memorial.”

He sees the statue as a way to help educate visitors years, or even generations, from now.

“People who don’t understand the history of the war fail to remember how effective our military was in freeing the Afghanis from the Taliban who were oppressing them,” Mosler said. “We’ve all seen the videos and tapes. We forget what our country does. We don’t go in and take territory. We go in and free people to make their own choices. Afghanistan is a great example.”

Sculptor Douwe Blumberg worked with members of the Special Forces team to ensure the statue’s depiction is accurate.

“This piece honors and pays tribute to America’s Special Forces’ response to 9/11,” he said. “The image was chosen because it represents the uniqueness, the adaptability, the courage and leadership of all our Special Forces.”

Perhaps more than anyone Blumberg knows how long it has taken for the monument to be erected at its permanent home.

“It’s surreal,” he said of the formal dedication. “I first sculpted this piece small in 2002 — that’s a long time ago. Now to see it here, especially overlooking the memorial, is pretty emotional.”

The horse’s hind legs are standing on the rocky Afghanistan countryside; sticking out from there is a 2-foot girder, a piece of steel from one of the twin towers. “It was like touching a piece of the USS Arizona, something that was part of a historical moment that was so integral to what we were doing,” he said. “And to be trusted to do something appropriate with it, was such an honor.”

Lt. Gen. John Mulholland, who directed Task Force Dagger and orchestrated the 60-day defeat of the Taliban, started the conversation about the monument 10 years ago with Blumberg. “We talked about the need for it to sit at Ground Zero and the need for it to stand watch over those two markers,” Mulholland said, referring to the north and south pools.

Mulholland identified three sets of heroes that emerged the morning of 9/11. The first, he said, were the citizen heroes — especially those in the towers and on Flight 93 — who helped each other. The second set was the first responders in New York City and Washington, D.C.

“You’ve heard the stories of the first responders — no more elegantly and passionately exhibited than here in New York City,” he said. “The firefighters and police in this great city went into those buildings and towers and saved their fellow men, knowing in many cases that it would mean their death. They knew they would not survive.”

And the third set was the Special Forces units who came together with CIA officers, said Mulholland, who is now an associate director at the agency. “They moved quickly and steadfastly to destroy the regime that oppressed the people of Afghanistan and who had hosted al-Qaeda. They removed Afghanistan as a sanctuary for al-Qaeda.”

Mulholland was among the speakers who noted the statue helps forever connect the 9/11 first responders to the members of Task Force Dagger.

“This statue sits here today, not at Fort Bragg, not at Fort Campbell, because we know the story,” he said. “I think it is crucial for the American people to know that story. We want the people of New York, the American people and guests who come to America to know that story — that we endured the attack, we responded to the attack here at home and then we took the fight to those enemies. And I want the people of New York to know — especially those who suffered — that we did not forget you.

“This is your statue. This is America’s statue.”