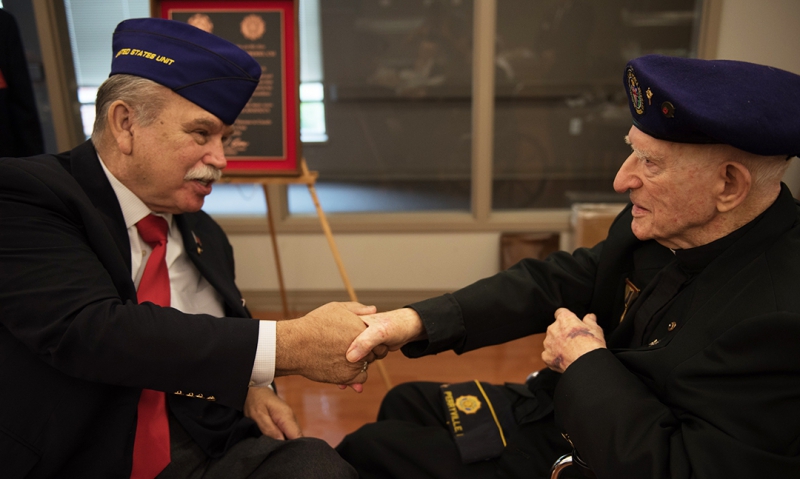 Rev. Jerome Fortenberry, an American Legion past national chaplain and member of ANAVICUS (Army, Navy and Air Force Veterans in Canada United States Unit), passed away Saturday, Nov. 5. He was 90.

A Legion member for 58 continuous years, Fortenberry was a member of Moonier-Reddick Post 133 in Perryville, Mo., where he resided at the Apostle Charity Residence at St. Mary’s of the Barrens. Fortenberry’s dedication to The American Legion followed after he was ordained a priest in 1955.

A World War II U.S. Navy veteran, Fortenberry was elected as the Legion’s national chaplain in 1973 at the 55th National Convention in Hawaii; it was the last time the position was an elected one. Fortenberry also served as chaplain for the Department of Missouri, for Missouri’s 13th district and for Post 133. He also served as ANAVICUS chaplain where he delivered prayer and sermons at the organization's meetings, which were held during national convention and Washington Conference.

American Legion Past National Commander William Detweiler looked forward to visiting with Fortenberry during the ANAVICUS meetings at convention. "His remarks during the post everlasting portion of the meetings were thought provoking and sincere, with a bit of humor thrown in, perhaps to make a point," Detweiler said. "We had a long friendship. He attended Loyola University in New Orleans, my alma mater, for a year on the GI Bill after he left the Navy. He enjoyed reminiscing about his days in New Orleans, and his subsequent visits with Legion families in Louisiana.

"The Legion and ANAVICUS are fortunate to have his many years of service."

Last June, Fortenberry received the honorable ANAVICUS Chaplain Emeritus award in appreciation of his many years of personal and spiritual leadership, as well as an annual $1,500 scholarship in his name, which will be granted to direct descendants of ANAVICUS members.

“He was a great, great man,” said Past National Commander and ANAVICUS President Jake Comer. “He was always instrumental in making sure we had mass on Sunday at convention and everyone always enjoyed his prayer because he was so religious in so many ways.

“As a Legionnaire, he was just an outstanding individual.”

Visitation for Fortenberry will be take place Tuesday, Nov. 8 from 5-7 p.m. at Church of the Assumption at St. Mary’s of the Barrens in Perryville, Mo. Visitation will continue on Wednesday at 9 a.m. until time of funeral service at 10 a.m. Military honors by Post 133 and the U.S. Naval Team will be provided during burial service at Vincentian Community Cemetery.