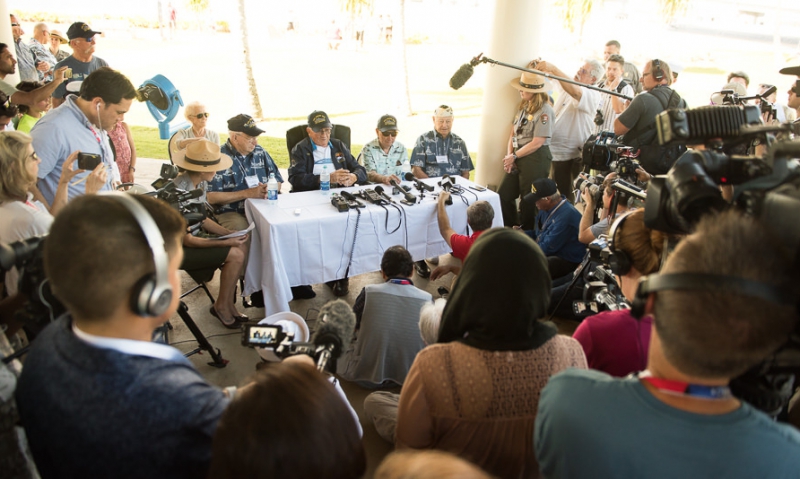 As remembrance bells tolled nearby, four of the five remaining survivors of the USS Arizona shared their memories of Dec. 7, 1941, at a news conference Tuesday at the World War II Valor in the Pacific National Monument, overlooking the harbor and the USS ArizonaMemorial. Earlier they signed autographs and greeted members of the public.

Louis Conter, 95, of California was among those who continued to try to extinguish fires on the Arizona for a full two days after the attack. “We tried to get all the injured to the hospitals first, then tried to put out the fires over the next two days,” he said. “We had to let it cool down first.”

Stratton still isn’t sure how he survived.

In a tribute to those who fell that day, Conter dismissed the notion that he is a hero.

“People call us heroes,” said Conter, a member of American Legion Post 130 in the Department of California. “We’re not the heroes, the 1,177 who went down with the ship are the heroes. You have to remember we got to go home, get married, have children and grandchildren, and we’ve lived a good life. Those who didn’t get to do that should be called the heroes.”

As Conter thinks about the future, he has advice for today’s and tomorrow’s servicemen and servicewomen. “Be prepared,” he said. “We don’t want it to happen again. The best way to do that is to be highly trained. Be ready to make a move in a second. Don’t get caught with our pants down. If you hear anything, or see anything, get to one of your military officers or civilian police, so they can see what is going on.

“We don’t want anything to happen to the United States like it did on December 7. We have to keep this country free for everybody.”