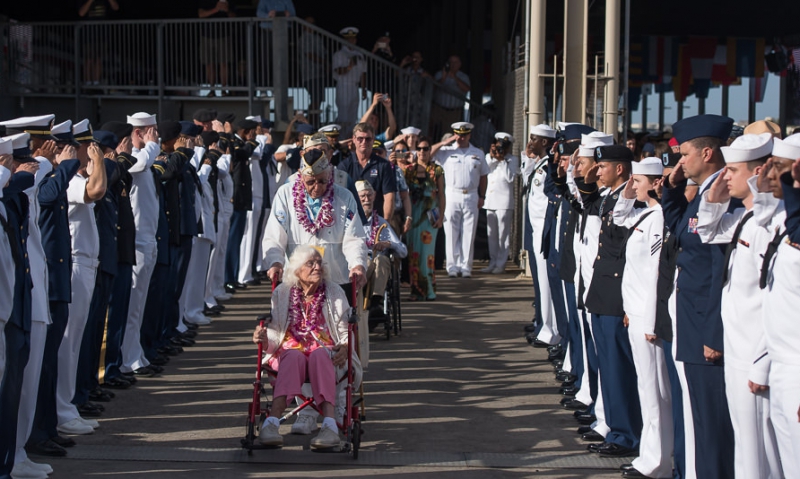 Exactly 75 years after Japan attacked the United States at Pearl Harbor, more than 4,000 spectators paused, reflected and remembered Dec. 7, 1941 — the Day of Infamy — at Kilo Piers 7/8 at Joint Base Harbor-Hickam.

The 90-minute ceremony began at 7:45 a.m. A moment of silence was held at 7:55 a.m. — precisely when the first bomb was dropped in 1941, catapulting the United States from a period of peace to four years of war.

Don Stratton, one of the five remaining survivors of the USS Arizona, was led to the stage and ceremoniously saluted the destroyer Halsey as it moved through the waters separating the spectators at Kilo Pier and the Arizona Memorial.

Admiral Harry B. Harris Jr., commander of the U.S. Pacific Command, told the crowd that veterans like Stratton probably woke up that Sunday morning, much like Americans do today, planning sports events, going to church or hanging out with friends and family. Yet, they did not get to experience those precious moments that day.

Instead, “they engaged the enemy as best as they could,” Harris said, noting the attack lasted for 110 minutes. “And there is sorrow for those who died. Yet we are also inspired by their great gift to the world — the gift of freedom itself."

The men who proudly defended freedom on that day also sent future generations a strong message.

“Those who survived Pearl Harbor also left us a warning,” Harris said. “Remember Pearl Harbor. Keep America alert. Eternal vigilance is the price of liberty — an imperative to never be caught by surprise again.

“But 15 years ago, we were again surprised by a major attack on our soil. Not by a nation state this time, but by terrorists. As before in the preceding decade, alarm bells had been ringing.”

In conclusion, Harris noted, “We remember Pearl Harbor and the attacks across the water. We remember America’s response by our sons and daughters. We also recall the many sacrifices made during World War II by the allied nations so that the world could see freedom renewed. Today, allies are again working together across the globe, including Japan after reconciliation.”

During the ceremony, a representative of Japan offered a “prayer of peace.”

First in Japanese and then through an English translator, the Rev. Tsunekiyo Tanaka of the Japan Religious Committee for World Federation said, “We are here today in the name of peace and for the deepest consideration and trust for one another. May we all live together peacefully.”

The American Legion was well represented at the commemoration event, including National Commander Charles E. Schmidt and Legionnaires from Hawaii, Washington state, North Carolina and elsewhere.

When Schmidt was traveling to the ceremonies Wednesday morning, his thoughts were with the men at Pearl Harbor 75 years ago.

Schmidt met several Pearl Harbor survivors this week, including Sterling Cale, a 95-year-old member of American Legion Post 17 in Hawaii. “He is still full of energy,” Schmidt marveled. “He was proud — proud of his service, proud to be an American. They need to share their stories with the young people. The group is getting smaller and smaller. They will help us to remember, but we need to carry on and not forget Dec. 7, 1941. It was a tragic day.”

“This year is a fantastic observation of remembrance,” he said. “Now the Japanese are here to honor, as part of the reconciliation. It’s a day, like Franklin Delano Roosevelt said, that will live in infamy. It’s a day like that we should never forget just like 9/11. Our country was violated. Hopefully that will never happen again and that’s why we need to remain vigilant and maintain a strong defense.”

The commemorations were nothing new for American Legion Department of Hawaii Commander Michael Souice. Still, given the anniversary this year, it was an extra special occasion.

“This being the 75th anniversary it is obviously a larger crowd than what we are used to having here,” Souice said. “For the Department of Hawaii, it is a big deal to us. We appreciate the support we get here from the civilian population of Hawaii. And there are a lot of veterans and active-duty members who live here. It’s an honor to live here and to be able to witness this every year.”

Wednesday’s remembrance event at Pearl Harbor is the signature ceremony of the week. It brings World War II veterans together, as well as allowing families to honor their loved ones, including those who have passed.

Joe Miranda of California shared the experience of his father, Vic Miranda, at nearly the exact moment when the Japanese unleashed the attack on Pearl Harbor.

“He was at Ford Island, had just gotten off the Oklahoma and was waiting at the flagpole for his buddy to go to breakfast when the first bombs hit,” said Joe, whose father died last year. “Then all hell broke loose. The bullets were raining down and the flag pole didn’t serve as much protection.”

Joe was among 19 family members — including some from as far away as France — who traveled to Hawaii for the ceremonies.

“It’s an emotional event so it is difficult but it is a good remembrance for my father, and also my uncles and everyone else who also fought in World War II.”