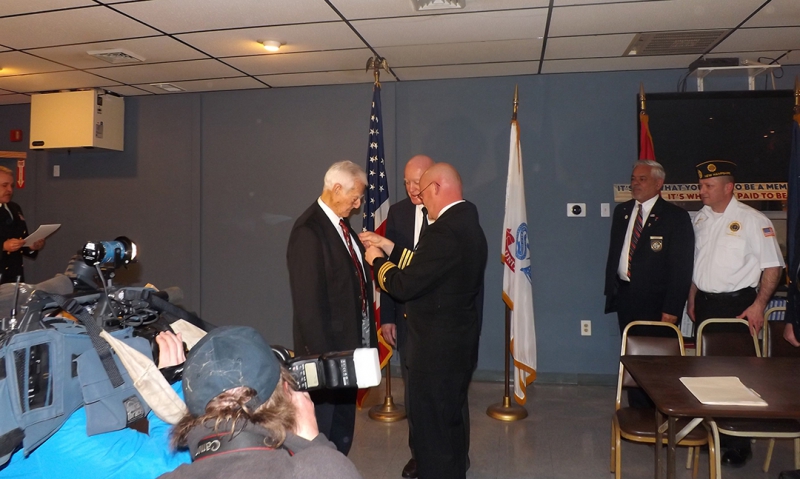 U.S. Navy veteran Gene Shannon receives medals earned during his service in World War II at a ceremony at Post 27 in New Hampshire.

A heart irregularity denied Gene Shannon entry into the U.S. Marine Corps following Japan’s attack on Pearl Harbor. But a few months later, a Navy doctor signed off on Shannon entering the Navy.

Shannon was eventually assigned to the Torpedo Squadron 81 as the senior radioman. He completed his training and was deployed to the Pacific aboard the aircraft carrier U.S.S. Wasp. His group flew strikes over the Pacific with missions carried out at Iwo Jima, Guam, Okinawa, Formosa, Hong Kong and Saigon.

After his service in the Pacific, which included heavy combat, Shannon eventually returned home, raised a family and became a private pilot. He started and operated several small businesses along the way.

But one thing was lacking in Shannon’s life: the medals he’d earned during his military service. But when U.S. Sen. Jeanne Shaheen was able to obtain the medals, Gene’s son Paul wanted to find a venue at which to present the medals to his dad.

That’s when Greeley-Parmenter-Harrington Post 27 in Londonderry, N.H., stepped up. Post Commander Bob Stuart said Paul came to the post looking for a venue for his dad to be presented the medals.

“Of course I said ‘yes,’” Stuart said. "That’s what the Legion is all about. You want to honor our warriors.”

Getting the post ready for what was anticipated to be a large crowd required a team effort. Stuart said members of the post’s Sons of The American Legion squadron volunteered to help rearrange the post’s accommodations for the ceremony. Stuart got delayed the day of the set-up and called the post to tell the SAL members he was running late. He was told “'They’re done. They wanted to take care of it for you,’” Stuart said. “I was like ‘Oh wow.’”

Leadership from the Portsmouth (N.H.) Naval Shipyard eventually was contacted and agreed to help present the medals. New Hampshire Secretary of State William Gardner, a longtime friend of Gene’s, also agreed to attend the ceremony.

In front of a packed Post 27, Shannon was presented his medals. “It’s kind of humbling,” Shannon told WMUR Channel 9. “You don’t feel like you’re doing anything extraordinary at the time. It’s what you train for. You just hope for the best.”

Shannon received several medals including the Philippine Liberation Medal, an award thanking him for his service in that part of the world.

Paul said his father never really talked about his military service. “As someone who enjoys history and has read quite a bit on the Pacific campaign, it was gratifying to me to see the enthusiastic and heartfelt response from the Navy and local veterans in honoring dad,” he said. “All of the men of his generation served with courage and dedication to our country.”

Paul praised the Legion for providing an ideal setting to honor his father. “American Legion Post 27, and Bob Stuart in particular, were instrumental in organizing a most appropriate and memorable evening for dad,” Paul said. “My wife said it best when she commented she had never seen a bigger smile on (Gene’s) face.”