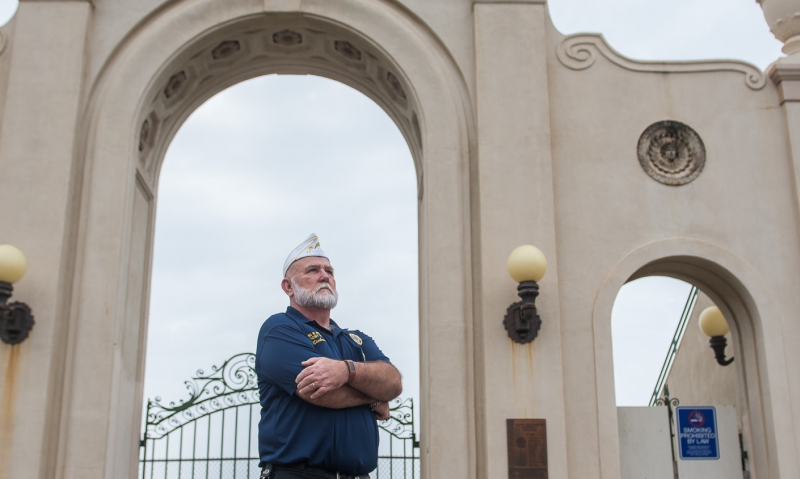 The stately Waikiki War Memorial Natatorium has a rich history.

During World War II, it was used as training for servicemembers. Generations of Hawaiian children learned how to swim there. In August 1927, Olympic swimming gold medalist Duke Kahanamoku celebrated its opening by taking the first official swim.

“Our World War I memorial is a living memorial to honor the 101 Hawaiians who perished during the first world war and all of the other volunteers who helped in that effort,” said Michael Soucie, department commander for Hawaii. “The American Legion was instrumental in getting that monument built. The Legion was young at that time and it got behind the concept of a living memorial. They put on the dedication of the memorial.”

The memorial is built in 1920s style with an arch stretching skyward, looking over the Pacific Ocean. Inside the now padlocked gates, bleachers surround an Olympic-sized swimming pool.

But now the memorial is in dire need of repair and support. Otherwise it may be torn down, taking with it a community memorial honoring Hawaiians who supported the United States, decades before the island achieved statehood.

When the salt-water pool was opened in the 1920s, the technology did not allow for the water to be changed out. In time, the salt-water damaged the pool, making it a public-safety issue, Soucie said, noting that it closed in the 1970s.

In the 1990s, the city and county budgeted $11 million to restore and reopen the monument. The offices, bleachers and restrooms were restored but the pool was still unusable.

In 2013, the city and state forged a plan to demolish the pool and move the arches inland, which drew outrage from The American Legion, other veterans groups as well as preservationists who wanted to see the structure, which has been declared a National Treasure, restored.

The state Historic Preservation Division’s rules require that all viable alternatives must be considered before the structure will be taken down.

Soucie has been committed to saving the monument. He wrote a resolution calling for the “full restoration of our World War I monument” that was passed unanimously at the department convention. In 2014, the National Executive Committee approved Resolution 18, which called for “full restoration of the Waikiki Natatorium War Memorial to its original condition and location to honor those servicemembers lost and injured during World War One.”

As department commander, Soucie has worked with preservationists on saving the memorial. “As an American Legion Rider, we ride out to the memorial on Memorial Day and Veterans Day to make a statement about the memorial. We get 80 to 100 motorcycle riders to come out and express our support of restoring the memorial.”

Right now, an environmental impact study is underway, as well as other discussions about how to handle the memorial. There’s just one acceptable solution for the Department of Hawaii.

“The monument needs to be fully restored,” Soucie said. “The technology exists today to make the salt-water pool that viable and let the people of Hawaii use this living memorial as it was meant.”

Soucie vows that he and the department will keep pushing to salvage the memorial.

“As a veteran, we need to honor the veterans that came before us,” said Soucie, a Navy veteran. “It’s a shame to allow such a monument to be in such disrepair in the first place. I’d love to swim in it someday. And I’d love for the children of Hawaii to swim in it.”