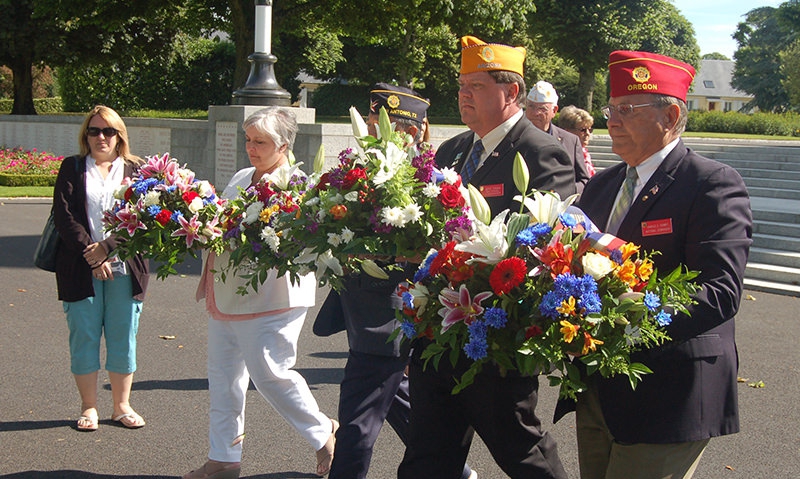 Bruce Malone, superintendent at the Brittany American Cemetery in western France, says youth groups will occasionally bring floral wreaths to the tranquil grounds near the town of St. James where 4,408 heroes of World War II are laid to rest. Malone says young people often have no preference about whose grave should be decorated with their wreaths. So, the superintendent recommends they honor the graves of the unknowns.

"Nobody comes to visit these unknown soldiers," Malone explained to an American Legion Family-USAA group Monday in France. "There is some type of story under each headstone."

Following the placement of the wreaths, Frain snipped roses from the SAL wreath and began placing them under the markers of unknowns buried at the American Battle Monuments Commission-managed cemetery. Altogether there are 95 unknowns buried there and 500 honored on the wall of the missing.

Every so often, Malone said, the number of unknowns falls by one. Such was the case for the grave of a soldier known only as X205 until 2014 when the case was made by a family and was accepted by the federal government that X205 was their blood.

When time came to dig the grave, remove the bronze coffin and examine the remains, one thing in particular struck Malone. "What care they took of these unknown soldiers."

Most Americans killed in the Normandy campaign were buried in temporary cemeteries starting as early as 1943, to include casualties of the Allied air campaign prior to the invasion.

Between 1947 and 1949, families were given a choice of leaving their loved ones in Europe alongside their comrades in new federal cemeteries or be repatriated to their home communities. "Fifty-seven percent of them went home," Malone said. "Otherwise, this cemetery would be twice the size."

Malone, who is soon leaving the Brittany American Cemetery for a different assignment in France with ABMC, told The American Legion Family-USAA group that he "can't describe" the honor it has been for him to watch over the Brittany American Cemetery and helping families make connections with their lost World War II veteran relatives. He says the museum has built a digital and physical archives of letters, photos and other memorabilia for those who are buried there and known. "When families send us letters and pictures for the Archives, we share their stories," Malone said. "...to keep them alive."

For the unknown soldiers, the superintendent is left to wonder if claim will ever be made and a name will replace the code used to index the fallen at the cemetery in France. If not, they will still be remembered by those who place wreaths and pay homage to all who died fighting, regardless whether they are known, for now, by a name or a code.

"Brittany American Cemetery is a place in Normandy that illustrates the service, sacrifice and commitment of so many Americans -- very young Americans," Schmidt said. "Our friends in France understand that freedom isn't free. Here, you soon discover that people are still very appreciative of the sacrifices of so many Americans in World War II. Here, they are not forgotten."