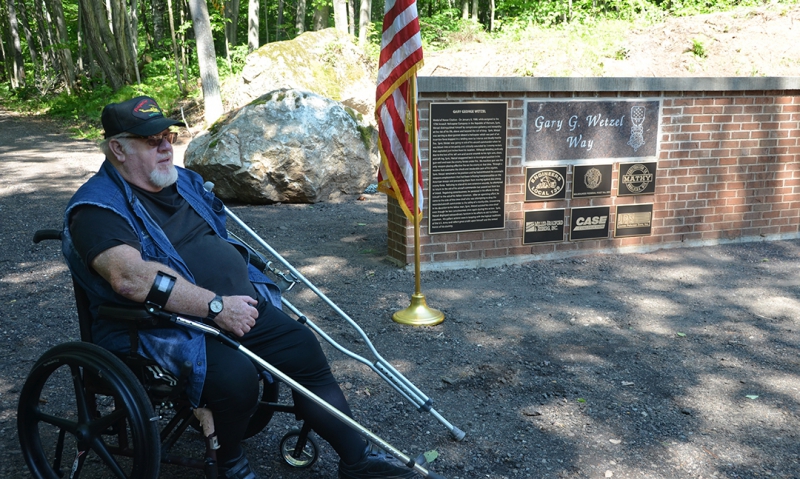 (Photo by Steve B. Brooks)

At first glance, the newest addition to Wisconsin’s Camp American Legion looks unfinished. Only the final third of a wall at the entry point of a walking trail appears to be completed.

And that’s the point. The Gary W. Wetzel Memorial Wall represents a process: the healing process a veteran goes through when he or she returns home after their military service. It’s a mission the Department of Wisconsin has taken very seriously as it has added to and expanded Camp American Legion over the years.

The memorial was dedicated July 8, with its namesake in attendance. Wetzel, a member of American Legion Post 139 in Coloma, Wis., was involved in a motorcycle accident in August 2017 and wasn’t able to walk until more than six weeks ago.

But, “I had to be here for this special occasion for this wall, for what it symbolizes (and) what it means,” he said. “It’s going to be growing and growing and growing. That’s what’s kind of neat about it: You can come back and reflect on it, what it’s all about.”

The wall begins with boulders strewn on the ground and becomes rocks held by gabion baskets. It transitions to a partially completed wall before morphing into a completed four-foot tall wall and plaque honoring Wetzel. The baskets are designed for visitors to leave items behind, similar to what is done at the Vietnam Veterans Memorial Wall in Washington, D.C.

“The wall represents a path of healing,” said architect Jim French of CSD Structural Engineers in Milwaukee. “The camp is really about … trying to bring veterans in and help them heal.”

French said his vision for the wall came together almost as soon as he first viewed the area of the camp where it would reside. “When I got here and saw the site … it was almost instantaneous for me,” he said. “It really just started to come together. It really just hit me that this could become a path to healing.”

The memorial wall resides at the start of Gary G. Wetzel Way, a mile-long paved handicapped-accessible trail dedicated in June 2016. The trail also was a collaborative effort between The American Legion Department of Wisconsin and Local 139 of the International Union of Operating Engineers.

Local 139 engineer Mike Burke said the union donated thousands of hours to the project, while Post 139 also provided another 300 volunteer hours. Seeing the wall dedicated was a moving experience for Burke.

“It caught up with me today,” Burke said of the end results of the project. “It touches a place in your soul.”

Federal Post 203 in Milwaukee donated $100,000 in 2016 that was dedicated to the memorial. Other corporations also stepped up with donations for what Department of Wisconsin Adjutant Dave Kurtz describes as a “message of hope.”

“(It’s) Inspiration for veterans and their families that together, we can not only survive, but we can revive,” Kurtz said. “We can come back and build upon our experiences of the past, and live lives of integrity and meaning. That’s what this monument means. It represents a veteran coming back from their experiences and rebuilding their lives.”

Wetzel hopes that the wall and connected walking trail can bring a sense of peace to those who use it. “You’re going to have men and women walk this trail who have served their country proudly,” he said. “Hopefully they can reflect on that service before they start walking on the trail.

“I’m extremely honored that they chose to do this. Looking at what it’s all about and people walking this trail or taking time out to think, or to be with a loved one or be by themselves, that’s what the trail is for.”

At the close of the ceremony, Kurtz asked those in attendance to come up and touch the wall to feel a sense of ownership. Department of Wisconsin Commander Daniel Seehafer then added that the wall is “dedicated to the memory of those who fell in service of our country (and) dedicated in the name of those who offered their lives so justice, freedom and democracy might survive. Their deeds are an inspiration.”

Burke said while the wall honors Wetzel, it also honors many others. “It serves the memory we have, as an association, of the people we served with,” he said. “My last tour (of duty) was in Iraq back in 2004. And we lost some guys. From each one of my deployments, sadly, I know someone who’s come home but never left the battlefield. Their end comes too soon at their own hands. They’re in here. They’re in those rocks.

“This is definitely personal. I left a piece of me here. It’s going to be hard to walk away. This wall changed me.”