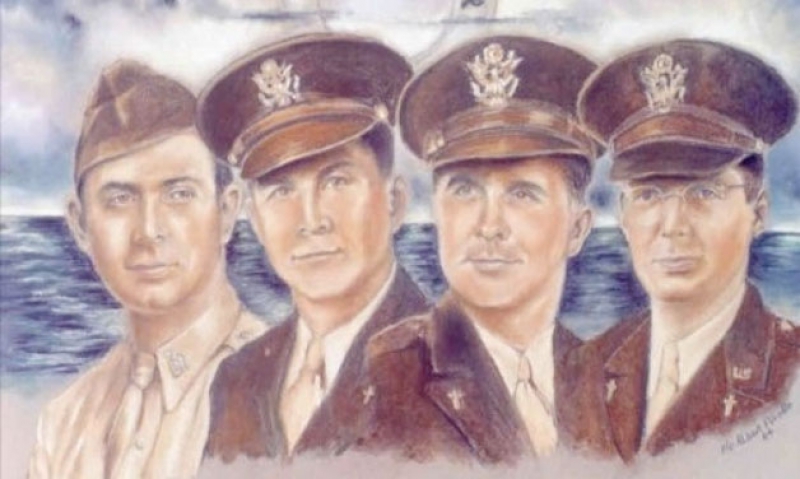 Feb. 3 will mark the 75th anniversary of the sinking of the United States Army Transport Dorchester and the selfless acts of four Army chaplains who were aboard. American Legion posts nationwide are encouraged to commemorate the anniversary each February and honor Four Chaplains Day.

The Dorchester tragically sunk on Feb. 3, 1943, while crossing the North Atlantic, transporting troops to an American base in Greenland. A German U-boat fired a torpedo that struck the Dorchester, killing 672 of the 902 officers and enlisted men, merchant seamen and civilian workers aboard.

Many of those survivors owe their lives to the courage and leadership exhibited by four chaplains of different faiths, who, in sacrificing their lives, created a unique legacy of brotherhood.

Fox, Goode, Poling and Washington were posthumously awarded the Distinguished Service Cross and the Purple Heart. And in 1948, Congress declared Feb. 3 to be Four Chaplains Day.

American Legion posts nationwide remember Four Chaplains Day with memorial services that pay tribute to the courageous chaplains and the brave young men who lost their lives on that fateful night. This year, Four Chaplains Sunday is Feb. 4.

Posts interested in conducting a Four Chaplains memorial service can learn how to through the Legion’s Chaplain’s Manual here. The manual provides biographies of the four chaplains, music ideas, a suggested format for the service and more.

American Legion Family members are encouraged to share how they honored Four Chaplains Day on www.legiontown.org.

To learn more about the four chaplains, visit the Four Chaplains Memorial Foundation at www.fourchaplains.org.