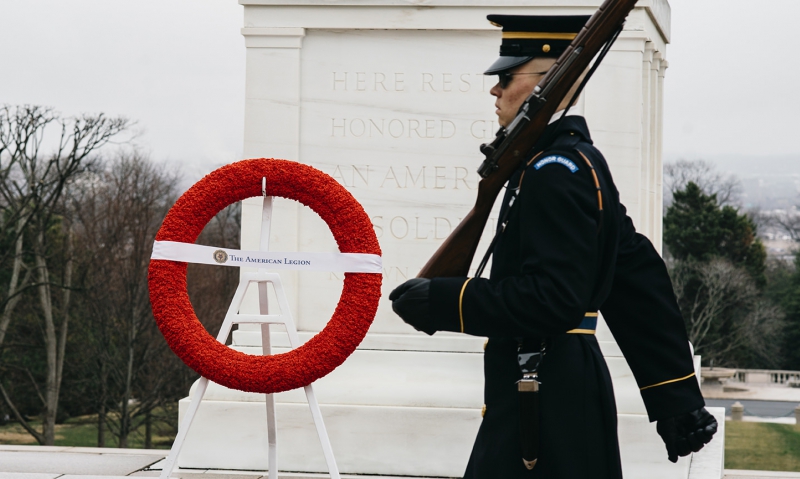 An American Legion wreath made of 25,000 poppies was laid at the Tomb of the Unknown Soldier in Arlington National Cemetery on Friday, Feb. 23, 2018. Photo by Justin T. Gellerson

Department of Maryland Commander James Marchinke led an American Legion delegation Friday to lay a wreath made of 25,000 poppies at the Tomb of the Unknown Soldier at Arlington National Cemetery.

“It was a great honor to be there,” Marchinke said. “I’ve been there three or four times but this is the first time I have actually presented a wreath.”

This wreath is the culmination of direct mail fundraising efforts where American Legion donors have returned the roses and/or poppies to be included in the wreath. This is the fifth consecutive year that donors have helped create such a wreath to be presented at Arlington.

During the ceremony, Marchinke reflected back to his time of service, which included Beirut.

“I did three tours in Beirut and the last tour was when I lost a lot of my friends in the explosion in the terrorist attack at the barracks,” he said, referring to the October 1983 terrorism attack that killed 241 American Marines and sailors. “But there are a lot of other comrades, too, that I worked with in the military. My thoughts were with all of them.”