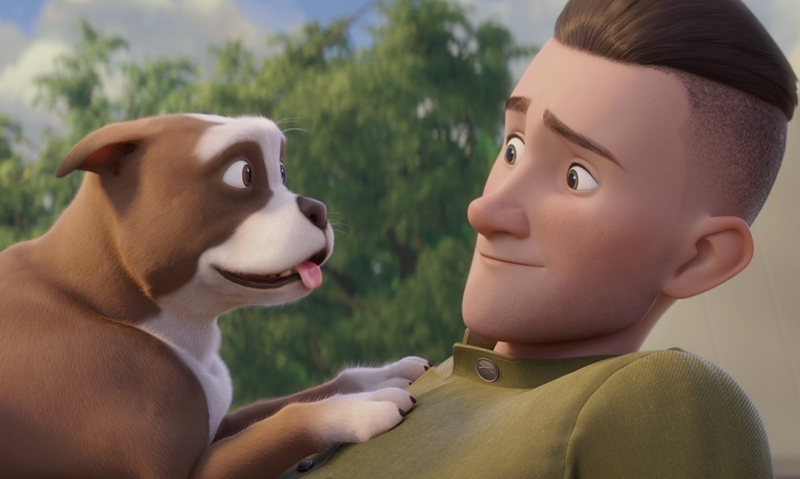 On April 8, New Haven, Conn., will host a street fair that will include both World War I-era automobiles and re-enactors, and modern military equipment and National Guard working dogs. The two war eras are coming together to celebrate the premiere of a movie 100 years in the making. And at that premiere will be Jack Monahan, The American Legion’s representative on the U.S. World War One Centennial Commission, because the hero of the movie is a very special Legionnaire.

When Richard Lanni began looking for a World War I-themed project after his popular “American Road to Victory” trilogy, the filmmaker decided he’d follow a historic figure through the American experience of the Great War – and came across the story of the nation’s most famous war dog.

Eight years later, Lanni’s “Sgt. Stubby: An American Hero” is about to hit U.S. theaters nationwide. Based on a true story, the animated film follows the stubby-tailed pup rescued from the streets of New Haven by Cpl. Robert Conroy in 1917. The doughboy smuggled Stubby to Europe with the 102nd Infantry Regiment, 26th “Yankee” Division, where the dog served on the Western Front for 18 months. He became America’s most decorated dog and a life member of The American Legion, and is currently memorialized at the Smithsonian.

When the division arrived in France, Stubby had special orders to accompany soldiers to the front lines. He saw action in four offensives and 17 battles, locating wounded soldiers and warning others to take cover from incoming artillery shells before they’d been detected. Stubby’s keen sense of smell also made him able to anticipate mustard gas attacks, once saving an entire company by alerting the men to don their gas masks. Stubby is regarded as a forerunner of the modern military’s working-dog program.

Stubby was not only a hero in war, as shown in the film, but he was heroic in supporting veterans returning to a world that had changed. “Veterans had a particularly hard time when they came back from the Great War,” Lanni says. “He visited veterans in the hospital, he led American Legion parades, and he was very active in the Legion.”

Lanni is the founder of Fun Academy Media Group, operating from his homes in Cork, Ireland, and Normandy, France, with production and distribution offices headquartered in Columbus, Ga. His “American Road to Victory,” which follows GIs from D-Day to the Battle of the Bulge, is the most-aired World War II-themed program in U.S. public television history.

To draw younger viewers, Lanni decided to tell Stubby''s story through the eyes of the dog. “I have to be sensitive about it, otherwise it’s going to be a war movie,” he says.

Lanni partnered with Technicolor to handle the film’s animation through its subsidiary, Mikros Animation, the studio behind “The Little Prince” and “Captain Underpants.”

The film’s 2-D sequence director is Jordan Beck, an officer in the Georgia Army National Guard. He also has a voice role. “Through this visual language we’re able to bring a history to life that all audiences can appreciate,” Beck says. “The story of how Fun Academy started was Richard realizing if we make this as an animated picture, kids can learn history.”

Lanni and Beck worked together to bring “American Road to Victory” to the National Infantry Museum Foundation in Columbus, where they put on specialty screenings near Memorial Day and the anniversary of D-Day.

“The American Legion was a huge part in endorsing (the series) and making it such a staple,” Beck says.

Lanni is known for telling stories through the voices of people who were there. “We are telling a true story, so some of these people actually existed,” he says. “It doesn’t feel like the usual animation.”

The voice cast of “Sgt. Stubby” includes Logan Lerman, Helena Bonham Carter and Gérard Depardieu. An original score was composed by Patrick Doyle (“Brave,” “Thor,” “Harry Potter and the Goblet of Fire”). “It is a wonderful emotional script, and Stubby’s exciting adventures are a delightful gift for a composer to capture,” Doyle says.

“All generations will take away something different from it,” Lanni says, adding that the film appeals to a wide audience. “When you look at our social media, which is a fairly good barometer of what people think about this, I see grandparents saying, ‘I gotta take the grandkids to see this,’ ‘Gotta go as a family,’ couples saying ‘Date night,’ and kids saying, ‘I hope someone takes us to see this.’”

To Lanni, the film is about the United States coming of age internationally, as well as friendship – between soldiers, the main character and the dog, and Americans and the French.

“It’s very much about courage, and I think a lot of people will look at Stubby and identify a bit of themselves in him,” Lanni says. “It’s almost the American dream, you know? He went away to France as a stowaway and he came back leading the parade. It’s charming and it has a heart.”

A sequel is already planned, about Stubby’s return home.

American Legion posts are encouraged to go to the film’s website – www.stubbymovie.com – to learn about group sales and how to bring it to a local theater.