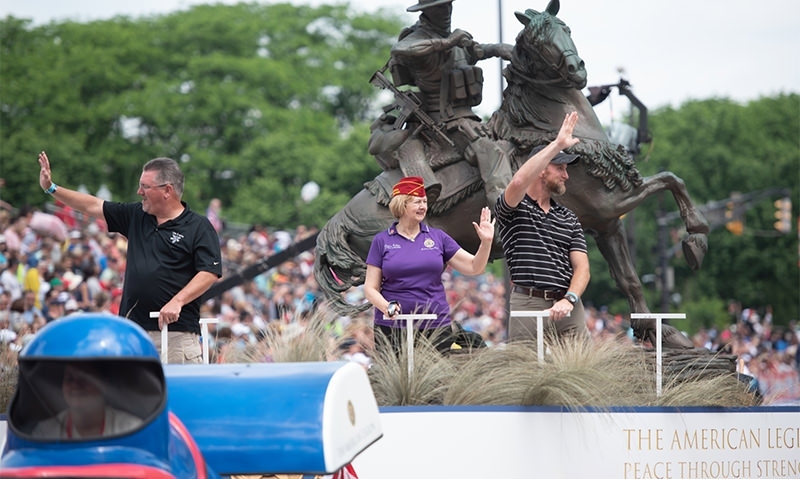 Nearly 17 years ago, 39 days after the terrorist attacks of Sept. 11, 2001, they were inserted by helicopter onto a godforsaken middle eastern landscape to fight the Taliban on horseback alongside warlords of the Northern Alliance. On Saturday, three of them were inserted onto a parade float alongside American Legion National Commander Denise H. Rohan in Indianapolis.

The Legion’s 500 Festival Parade float won the prestigious President’s Award for most original design concept earlier in the week. It featured a replica of the “America’s Response Monument” that now stands near Ground Zero in New York City. The statue, featuring a 21st century Special Forces soldier on an ancient-bred Afghanistan saddle horse, has come to illustrate the ongoing war on terror, America’s earliest ground response to the attacks.

“It was the initial symbol, the icon right after 9/11,” said Nutsch, whose real-life role in the early fighting inspired the 2018 hit movie “12 Strong.”

“That mission brought hope to American people, and to the Afghan people as well, who were involved in that tough fight with the Taliban and al Qaida … liberating their country,” Nutsch said. “I hope (the parade float) sheds light on more stories, more of the incredible missions and experiences that have happened in the years since.”

Summers is credited with making the oft-referenced statement describing the clash of warfighting cultures that came when the Americans deployed to Afghanistan. “We had met with (former Defense Secretary) Donald Rumsfeld,” Summers explained Saturday before climbing aboard the float in front of American Legion National Headquarters. “We just had a few minutes, and he was asking us to describe our impression of the mission, and I said, ‘It was like The Jetsons meeting the Flintstones.’ We brought all this technology, and we had all this raw, indigenous talent. We brought that together. It was such a neat, interactive combination.”

That combination helped send the Taliban into rapid retreat in the earliest stages of the war, a battle that has been compared to the famous “charge of the light brigade” in the Crimean War and other bold assaults in military history.

“Not too many people know what we did,” said U.S. Army Lt. Col. (ret.) John Spanogle, an Indianapolis Legionnaire who led one of the Special Forces teams in the late 2001 mission code-named Task Force Dagger. “One-hundred Green Berets on the ground who took over a country … that’s unprecedented in history.”

The statue was brought to life by internationally renowned sculptor Douwe Blumberg of Kentucky, whose grandfather disappeared into the Holocaust of World War II. (See story at www.legion.org/magazine/230686/war-sculptor.) Blumberg allowed The American Legion to use the original foam form of the 16-foot bronze monument, housed in the attic of his studio, to build the centerpiece of the 500 Festival Parade float.

Spanogle, son of American Legion Past National Commander and Past National Adjutant Robert W. Spanogle of Indianapolis, contacted his former 5th Special Forces Group comrades last spring to see if they would join the Legion on the 500 Festival float.

“Brotherhood for life,” he said. “There is no stronger bond than the bond you forge with the men you go into combat with.”

Spence, who took the photographs of horseback Green Berets that Rumsfeld shared in November 2001, said he and his fellow elite soldiers “were just doing our job” when they became the first Americans to ride horseback into battle since 1943.

“We didn’t know the magnitude of what it was going to turn into,” Spence said before the parade began. “We just retaliated on behalf of the United States. We just brought with us America’s scorn. We brought Gideon’s sword forward, in retaliation for what they had done.

“We were basically at the right place at the right time,” he added. “That’s what it all boils down to. The recognition, the thanks we get … it’s just overwhelming because we were just doing our jobs. It’s like the firefighter or the policeman who stands his post each day just doing his job. We just happened to find ourselves in that historic moment, at that time.”

Rohan said she hopes the float will inspire young people to study the stories of military courage and sacrifice. “It’s amazing,” she said. “We never take enough time to hear these stories. It’s all part of our history, and there are so many of our youth who don’t understand.”

Spanogle said the Special Forces veterans at the parade Saturday were also “memorializing our brothers on Memorial Day – the ones we lost. Holding that memory of our brothers on this day brings us together even stronger.”

“The one prevailing thought, emotion, desire in my heart, is that I just wish (people) would realize that everyone out there who is serving deserves the same credit,” Summers said. “There are so many people earning this same privilege that we have right now. I am just humbled. I don’t take responsibility for it. But I accept it for everybody out there, who is winning this. This is their float, not mine.”

For Baldridge, an Indiana American Legion Hoosier Boys State alum, “it’s a very big honor” to be a part of the festival alongside the Task Force Dagger veterans. “It seems like every generation has that group of very elite warriors that sets themselves apart. This seems to be our generation’s guys, since 9/11. I am very honored to meet these true heroes, who have set an example for what I hope to accomplish in my career.”

Sons of The American Legion National Commander Danny Smith put it this way before joining American Legion Auxiliary National President Diane Duscheck in the parade: “I feel like I am in the company of heroes every day that I am a part of this organization.”