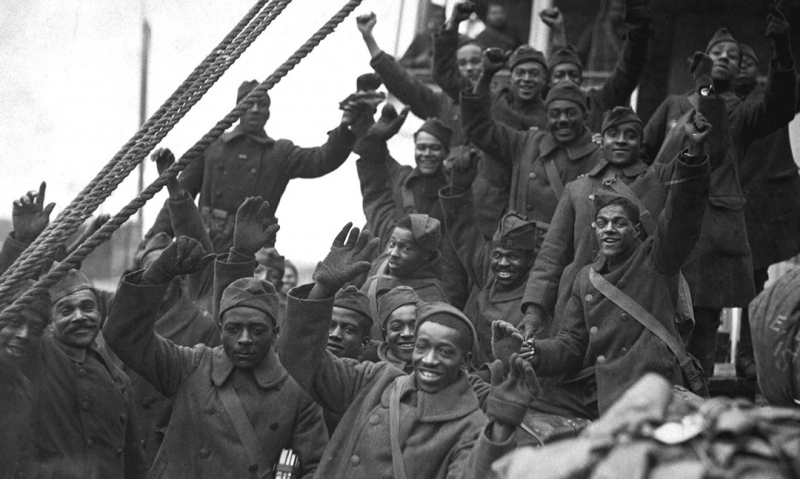 Members of the 369th Infantry, formerly the 15th New York Guard Regiment, arrive in New York City in 1919. The regiment has been known as the Famous 369th, the Harlem Hellfighters and the Black Rattlers. War Department photo

With American Legion support, a group of volunteers is proposing the first-ever review of World War I veterans who may have been denied a Medal of Honor due to racial or ethnic discrimination.

Established by the U.S. World War One Centennial Commission, the Valor Medals Review Task Force is starting with the records of approximately 70 African-American soldiers -- in particular, those worthy of the nation's highest military award who may have been downgraded to a Distinguished Service Cross or received a French Croix de Guerre with palm.

"We're not going in with any number in mind," says Jeffrey Sammons, professor of history at New York University and co-author of "Harlem's Rattlers and the Great War: The Undaunted 369th Regiment and the African American Quest for Equality."

"We want this to be as unbiased and apolitical as possible, and to let the evidence lead us where it may."

The U.S. military conducted reviews of valor awards for minority veterans of World War II, the Korean War, the Vietnam War and all subsequent conflicts, but not those who served in World War I. The posthumous awarding of Medals of Honor to Cpl. Freddie Stowers in 1991 and Sgt. Henry Johnson in 2015 set a precedent for challenging the postwar review conducted in 1919, which resulted in zero Medal of Honor awards for black veterans and few for other minorities.

At its 100th National Convention in Minneapolis in August, The American Legion passed Resolution No. 109, which calls for legislation lifting statutes of limitation and other obstacles that may impede proper review of minority veterans' World War I records that support consideration for a Medal of Honor.

The initiative can be traced to a lecture given by Sammons at Park University in Missouri, home of the George S. Robb Centre for the Study of the Great War. Two years ago, Timothy Westcott, the center's director, invited Sammons to speak on Robb, a white officer with the 369th Regiment and 1912 Park University alum who received a Medal of Honor for leading an assault near Sechault, France, while severely wounded.

While examining Robb's personnel records and a Medal of Honor index sheet, Sammons discovered that Sgt. William Butler of Salisbury, Md., of the 369th was nominated for the award the same day as Robb. In fact, Robb had praised Butler for his heroism on Aug. 14, 1918, when he saved his commanding officer and other men from Germans who had raided their trench. Upon his return to the United States, Butler was cheered by a crowd of 5,000 at New York's City College.

As a history consultant to the World War One Centennial Commission, Sammons mentioned the case for Butler to be considered for a Medal of Honor, as well as Burton Holmes of Clemson, S.C. A private with the 371st Infantry Regiment, Holmes posthumously received the Distinguished Service Cross for his actions in France on Sept. 28, 1918. Badly wounded and with his rifle out of commission, Holmes took up another in the face of heavy German machine-gun and shell fire, and was killed.

Sammons is advocating for a broader effort -- one that goes beyond localized, individual campaigns to award a Medal of Honor to this person or that.

"I said, 'This is not right, to kind of cherry-pick our favorites,'" Sammons says. "Having done a book on the 369th, Butler is right there for me. But there has never been a systematic review of valor medals for African-Americans in World War I, like the Shaw University study for World War II (1994-1997), which recommended 11 cases, of which seven received Medals of Honor."

When he suggested such a review for black veterans of World War I, the commission agreed. It formed a task force that includes Sammons, Westcott, two retired major generals, a Medal of Honor historian and a supporting group of researchers.

Under Westcott's direction, Park University will do a "deep dive" into archival and genealogical documentation on each African-American who received the Distinguished Service Cross, Croix de Guerre or Medaille Militaire. He anticipates the project will last three to five years.

"We know there will be a limited few who will warrant forwarding to the appropriate agencies (for consideration for a Medal of Honor), but each of these individuals has a story to tell," Westcott says. "We are going to digitize everything we find so it's available to communities and family members who may never have known about them otherwise."

A Marine Corps veteran and member of American Legion Post 318 in Parkville, Mo., Westcott says it's important the nation does its due diligence in regard to minorities who served with valor in the Great War -- some of whom made the supreme sacrifice.

"The military has at times been a leader in social change," he says. "This project should hopefully continue that long tradition of righting a possible wrong."

Dwight Mears is a retired Army major and former history professor at the U.S. Military Academy. He's also the author of "The Medal of Honor: The Evolution of America's Highest Military Decoration," a definitive treatment of the award's complicated -- and at times contradictory -- history. Well-versed in the statutes and policies behind the medal, Mears will provide guidance on recommending which awards should be upgraded and legal models on cases where there may not be direct evidence of discrimination.

Until the 1990s, not a single African-American had earned a modern Medal of Honor. That seems statistically unlikely if you compare that to the numbers who were in combat, and the people most aware of that were African-Americans, Mears says.

"They assumed that outcome could not possibly have come about without some sort of discrimination, because in those conflicts they were treated abysmally," he adds. "It wasn't like any of them would say they were treated the same as whites. There's pretty much a historical consensus about that. So the African-American community had already formed an opinion going back decades that the Medal of Honor had become tainted by discrimination.

"Medals don't have a lot of value if you don't award them equitably. They're just trinkets you put on your uniform. And if you tarnish what that medal means to an entire segment of the nation, you significantly dilute the meaning of that decoration."

The task force will look at the records of other minority veterans, too, but is currently focused on African-Americans because of the legal structure of segregation at the time, Mears says. Discrimination as a matter of law means a stronger presumption that their awards were tainted by discrimination than other ethnicities.

"If this case can be made in a way that's scholarly and coherent, it ought to be done," he says. "That's the only thing that will repair the meaning and image of this decoration among at least that demographic and possibly others. If you don't, you're basically going to have to argue that either you're wrong about the discrimination or that the discrimination is not significant enough to disturb the status quo.

"I didn't know enough years ago to know one way or the other and would not have presumed either way. But now that I've looked at the evidence, I'm convinced that discrimination probably did taint a number of these cases."

Sammons says no group was singled out for condemnation and criticism like black soldiers, particularly black officers.

He cites Gen. Robert Bullard, commander of the Second Army, American Expeditionary Forces, whose memoirs described African-American soldiers as cowardly and inferior to whites. And in a famous letter to a Tennessee senator, Col. Allen Greer, chief of staff for the 92nd Division, wrote that black soldiers could do everything but fight and were "dangerous to no one but themselves and women."

A 1925 Army War College report formalized and institutionalized such slander, resulting in the near disappearance of blacks in combat roles between wars, Sammons says.

Instead, they suffered from a lack of recognition for their achievements in wartime. Henry Johnson, for example, died in 1929, in poor health and bad financial straits. William Butler died by suicide in 1947. Needham Roberts, who fought off a German patrol with Johnson and was unable to maintain steady employment due to his wounds, took his life.

"The fact that these men did not get the honors they deserved caused considerable mental and emotional harm to them," Sammons says.

At present, he knows of at least eight African-Americans who were nominated for a Medal of Honor: four from the 370th Regiment, one from the 366th, two from the 371st and one from the 369th (Butler). All were downgraded except Stowers, whose nomination was not acted upon. Though he has found affidavits for the nominees, Sammons says locating such documentation is not an easy process.

"It's not going to be done in months," he says.

"This is largely about initiating an effort to help the military determine the merits on its own in a way it is not staffed to do," Mears says. "The military has historians in its employ, but it would be a major undertaking for them to tackle a task like this. What we're trying to do is serve up all the information needed to fix this problem, and ultimately it's going to be their decision."

The Valor Medals Review Task Force had an early success this year with the introduction of a bill by Sens. Jon Tester, D-Mont., and Dean Heller, R-Nev., calling for the Congressional Gold Medal to be awarded to the "Hello Girls" female switchboard operators of World War I -- also supported by an American Legion resolution.

Click here for more information about the World War I Valor Medals Review Task Force, including how to volunteer as a researcher or support the task force in other ways.

Anyone with information about African-American World War I veterans who received the Distinguished Service Cross or Croix de Guerre with palm, or who were recommended for a Medal of Honor but did not receive it, is requested to contact Zack Austin at zachary.austin@worldwar1centennial.org.