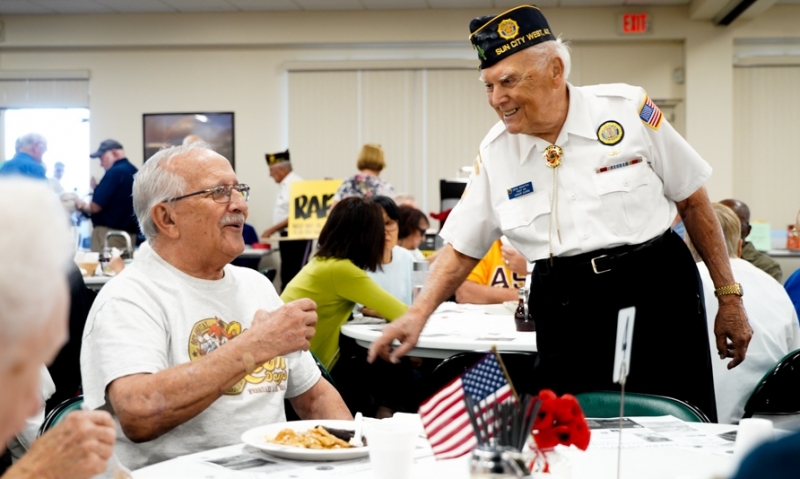 After serving for more than 30 years in the Navy and working as a civilian at airports, Randy Fuller retired to focus on having some fun.

His military career spanned from when Americans gave a hero’s welcome to World War II veterans to the public condemnation that greeted Vietnam veterans.

“When I retired, you didn’t want to broadcast it because people were anti-military,” said Fuller, who saw action as a Navy pilot in World War II, Korea and Vietnam. “I would like for the public to thank us — all veterans — and recognize our service. I enjoyed every minute of it. I would do it again if I had the time.”

Fuller and his fellow veterans — from World War II through the War on Terror — were honored during a special pancake breakfast on Nov. 6 hosted by American Legion Post 94 in Sun City, Ariz. The post started the twice-annual tradition about 30 years ago.

Since moving to Sun City in 1996, Fuller spends about eight months of the year there. “We appreciate the fact that they recognize us,” said Fuller, a member of Post 94. “I’m very humbled by it.”

On the first Tuesday in March and November of every year, between 600 and 700 veterans, military supporters and other community members turn out for pancakes, sausage and friendship.

For the Legion post, the breakfasts provide more than good food, camaraderie and community goodwill.

“It’s our primary fundraiser for the year,” Post 94 Commander Larry Leighton said, noting the November breakfast kicks off Veterans Day celebrations for the community. “All of the money we raise here goes to take care of veterans here and The American Legion programs in the Northwest Valley.”

The post uses proceeds from the breakfasts to fund three Boys State and three Girls State participants each year, as well as cadets in the department’s Youth Cadet Law Enforcement program. The post also contributes to local nonprofits that support local veterans, including Soldier’s Best Friend, which links veterans with service dogs.

Among them is Doc Danker, an Army Air Corps veteran who volunteers every time to help prepare and grill the 1,200 sausages for the breakfast. He and his team began cooking the sausages before the sun rose to be ready for the crowds, which arrived ahead of the 7 a.m. start.

“I’ve always done this,” Danker said. “We help a lot of people. It means an awful lot. It’s what we are here for.”

About 15 minutes after the breakfast opened, the 25 tables — with eight to 10 chairs each — were packed. Crowds continued to stream in throughout the morning until the event wrapped up at 11 a.m.

Gene Bogatko is a World War II veteran and former Post 94 commander. He made the rounds, greeting old friends and making new ones.

“It’s a gathering for veterans to meet and see each other again at least twice a year,” Bogatko said. “It’s also an opportunity to see other veterans and their families who we don’t often get to see. We enjoy it and enjoy doing it for the community.”

Gerry Berger was post commander for the past five years before Leighton took over. She credits the community involvement for keeping the breakfast popular and relevant.

“They’ve been supporting our post for many years and its’s nice to see familiar faces come back every six months,” she said, noting it takes about two dozen volunteers to handle the event. “It’s a delight because they recognize us. It’s wonderful, simply wonderful.”