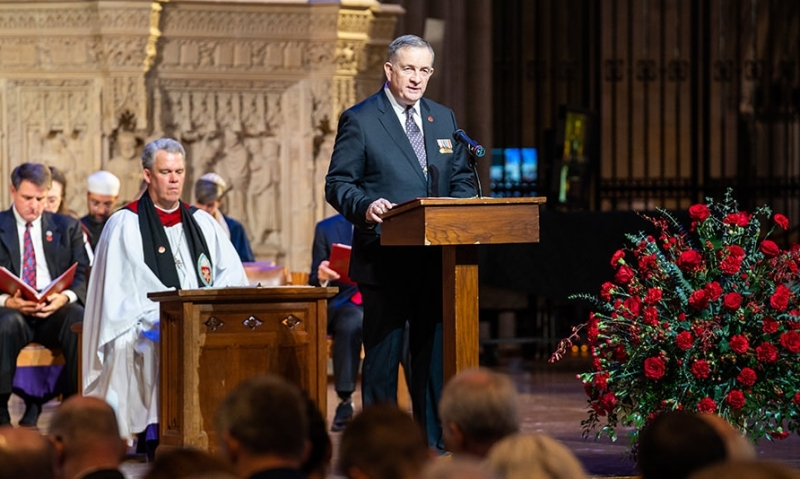 In a sacred service that recalled the thousands of lives lost and the joy that followed news of the armistice, members of the U.S. World War One Centennial Commission and other officials paid tribute to a generation largely forgotten in the wake of later conflicts.

Across the nation, communities joined in the tolling too, including American Legion posts, town halls, schools, cemeteries and places of worship. All U.S. military installations, as well as Navy and Coast Guard ships in port and at sea, tolled their bells. Individuals participated using the Bells of Peace smartphone app, which had been downloaded 20,500 times as of 11 a.m. that morning.

"'This was a happy day,'" said retired Army Maj. Gen. Alfred Valenzuela, quoting the Nov. 11, 1918, diary entry of Pvt. W.R. Phillips, Company D, 110th Engineers, 35th Division, American Expeditionary Forces (AEF). "'The band played and our dear old flag flew proudly. That showed to us that peace was at hand. We are ready to leave this old world behind and set sail for America and live in peace under the dear old red, white and blue forever.'"

The national service was a tapestry of poetry, prose and prayers offered by religious leaders of various faiths. Terry Hamby, chairman of the World War One Centennial Commission, and former Joint Chiefs chairman Michael Mullen led academy cadets and midshipmen in placing a wreath at the tomb of President Woodrow Wilson, who is interred at the cathedral.

Among the speakers was retired Air Force Col. Thomas Moe, a Vietnam War veteran, former prisoner of war, and one of the first persons appointed to the World War One Centennial Commission when it was established in 2013. He read an excerpt of "For the Fallen," by English poet Laurence Binyon, who served as an Red Cross orderly during the Great War.

On Moe's mind was his great-uncle, Harold Forsberg, who managed to survive gas attacks and a deadly flu while at the front, in addition to receiving word that his father had died while he was away. More than 4 million Americans served in World War I, and 115,516 never came home.

"To remember them is so important," Moe said. "Each number is a person with a name, with a family."

Edward Bilous of the Julliard School composed original music for the occasion. As the cathedral choir sang "Do Not Stand at My Grave and Weep," a video showed faces of those who fought the "war to end all wars."

"We strived to have a balance between commemorating our war dead and a thematic turning toward peace at the 11 o'clock hour," said John Monahan, The American Legion's representative on the World War One Centennial Commission. His committee spent months planning the event, distilling dozens of suggested songs and readings into an hour-and-20-minute program.

Monahan's own contribution was "Rouge Bouquet," a lyric poem by soldier Joyce Kilmer about the German artillery bombardment of an American trench position near the Rouge Bouquet wood in France. Kilmer was killed July 30, 1918, in the Second Battle of the Marne, and the poem was read over his grave.

"He's their A-Team, and they lent him to us, God bless them," Monahan added.

In one of the service's most moving segments, commissioner Libby Haight O'Donnell told the story of the last soldier killed, an American, just one minute before the armistice took effect.

"The squad approached a German roadblock with two machine guns," O'Donnell said. "The soldier got up with his bayonet in his hand, and against the orders of his sergeant, charged. The German troops tried to wave him off. He kept going, firing a shot or two. When he got too close to the machine guns, he was shot in a burst of automatic fire and killed instantly.

"This last man who died, shot by a German machine gunner. This last man, Henry Gunther, a German-American, born to German parents in Maryland.

"Had he waited just one more minute, they might have welcomed him as a brother. 'Mein bruder, mein bruder.'"

After the tolling of the bells, Carol Moseley Braun, former senator from Illinois and U.S. ambassador to New Zealand, read Isaiah 2:2-4: " ... they shall beat their swords into ploughshares, and their spears into pruning hooks; nation shall not lift up sword against nation, neither shall they learn war anymore."

A diplomatic adviser to the World War One Centennial Commission, Braun called the invitation to participate in the service "one of the greatest experiences of my life." Her grandfather, Thomas Davie, was a sergeant in the AEF and fought in the Meuse Argonne; his photo is the screensaver on Braun's phone, to keep his memory near.

After the service, Moe, Braun and other commission members attended a military and veterans salute at Pershing Park, site of the future National World War I memorial.

Standing in front of a lifesize portrait of the memorial's sculptural wall, Moe encouraged support for construction of the memorial, which depends on private donations.

"Until now there's been no national World War I memorial here in our nation's capital," Moe said. "We're going to build it here right next to (the statue of) General Pershing, so that as he stands there with his field glasses, he's looking across the way at his men."

Braun said it is a memorial that is long overdue, but credits World War One Centennial Commission Executive Director Dan Dayton and his team for making it reality. "It's such a noble thing to do, and I'm so happy to be a part of it," she said. "This was the war that changed the world, literally changed the world, and that we're just now getting getting around to commemorating it – shame on us, but we're doing it. There have been a lot of hands on the oars for this, and I'm looking forward to a ribbon-cutting."

She singled out sculptor Sabin Howard, calling his vision for the memorial "magnificent."

Katarina Hass, winner of National History Day San Diego, gave a historical performance, portraying a German soldier reflecting on the Christmas truce of 1914. She was joined by Daniel Wright, winner of Georgia National History Day, for "Who They Were," a presentation on the diverse backgrounds of American men and women brought together by their service during the Great War.

Capping the day's events was a performance by the 369th Experience Band, a recreation of the 369th Regimental Band that introduced European audiences to ragtime, jazz and blues. Sixty-five black and Puerto Rican soldiers comprised the original band; the 369th Experience is made up of student musicians from 12 historically black colleges and universities in nine states.

When the 369th Regimental Band arrived overseas in 1918, the first piece it played was "La Marseillaise," the French national anthem. "They played it with such a jazzed-up, driven, syncopated rhythm that it took eight to 10 bars for the French to realize they were playing their own national anthem," Europe said. "Everyone rose real quick, soldiers snapped to attention, and that was the beginning of France's love affair with jazz."

Before James Reese Europe joined the Army, he organized the Clef Club, a society for blacks in the New York music industry. "The songs they made famous he brought right into the 369th, and what you're going to hear is a playlist from that era," Sissle said. Selections included "Memphis Blues," "Tiger Rag," "Darktown Strutters' Ball" and "Ja-Da."

Declared by its commanding officer to have "the best damn band in the Army," the 369th is also famous for its combat record: 191 consecutive days at the front, more than any other U.S. regiment in the war. It also won 171 individual awards as well as a regimental French Croix de Guerre.