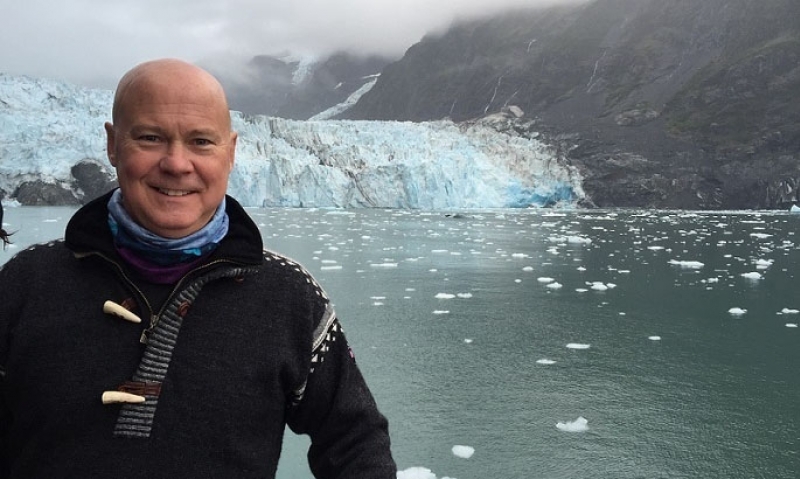 Tom Mullikin is a veteran Army officer and Legionnaire who equates military service to the second-greatest commandment, “to love your neighbor as yourself.”

That’s how he’s approached his command of the South Carolina State Guard (SCSG), a post from which he retires this month. It also guides his work as a practicing energy and environmental attorney, university professor and global expedition leader.

“Approaching everything we do in the spirit of serving others is the only real formula for any tangible success at anything,” says Mullikin, a member of American Legion Post 172 in Columbia, S.C.

“It’s like when you climb a mountain – if it’s a truly challenging summit, you simply cannot do it by yourself. Your life depends on others, on keeping them fit, alive, focused and, if possible, happy. And they have to do the same for you.”

Mullikin is a National Geographic expert and helped lead an Alaska expedition for the organization in 2016. He was recently named a fellow in the famed Explorers Club and the London-based Royal Geographical.

He’s summited peaks around the world – often with his son, Thomas Jr., and a handful of former Army Special Forces operators – including successful climbs of four of the seven great summits: Mount Elbrus (the highest mountain in Europe), Mount Kilimanjaro (the highest in Africa), Mount Kosciuszko (the highest on the Australian mainland) and South America’s Mount Aconcagua (the highest in both the Western and Southern hemispheres).

Mullikin hopes to tackle the remaining three – Mount Denali (formerly McKinley, the highest in North America), Mount Vinson (the highest in Antarctica) and, finally, the 29,029- foot Mount Everest in Asia – in his quest to achieve a new world record: having climbed all of the seven great summits and scuba-dived in all five oceans.

He’s has already logged the dives, including ice dives in the Arctic and Antarctic, and he’s a certified polar diver.

Again, though, it’s about teamwork. “You are never truly successful if you cross the goal line alone,” Mullikin says. “The greatness of any leader or achiever is measured by the numbers of people they lead into the end zone with them.”

It’s a simple-sounding philosophy that’s guided Mullikin in leading the SCSG since he took over in 2014, and one that he credits in taking organization from “good to great to elite.”

When Mullikin became commander, the historic guard was struggling with relevancy and reputation. Not to be confused with the state’s Army National Guard or Air National Guard (both of which also fall under the parent umbrella of the South Carolina Military Department), the SCSG is an all-volunteer military organization tasked with statewide missions. It often augments the National Guard and other SCMD elements in state disaster-relief services and related operations.

“We were pretty good when I took over,” Mullikin says. “It might be better to say we had some really good people who were ready, willing and able to go to work and take us to the next level. I tried to make them feel better about who they were by encouraging them to a higher standard and pointing them back to the greatness of their 17th-century militia forebears.”

Recent years have brought newfound recognition of the SCSG as having fielded one of the finest search-and-rescue capabilities in the nation, in the aftermath of three major ocean events in as many years. Another key to success has been a surge in recruiting, as well as a retention of professionals – military veterans, law-enforcement officers, physicians, attorneys, engineers, chaplains, business leaders, professors, even professional musicians – who have committed themselves to serve their state without pay.

“The South Carolina State Guard has evolved into one of the finest military organizations in the nation dedicated to natural disaster response,” State. Sen. Thomas Alexander says. “Their professionals’ support during the Joaquin floods in 2015 cannot be overstated. Simply put: an elite, dedicated organization of selfless professionals.”

In federal service, Mullikin was an Judge Advocate General (JAG) Corps officer with the Army Reserve’s 12th Legal Support Organization, where he served as a trial counsel. He then served as international legal officer for the 360th Civil Affairs Brigade (Airborne), before beginning service in the SCMD and ultimately the state guard.

Mullikin speaks at American Legion posts about various topics, as well as at civic clubs, community organizations, and college and high school ROTC programs about the Legion. He’s also a strong supporter of American Legion Baseball.

Retired Marine Maj. Gen. James Livingston, a Medal of Honor recipient, says that Mullikin – like others who have climbed the world’s highest peaks – is a “model of perseverance.”

Col. Bill Connor, a former senior U.S. military adviser in Helmand province, Afghanistan, agrees. “I’ve known Tom Mullikin for years, and he epitomizes the warrior ethos,” he says. “A man of great integrity and fortitude, Tom has shown the courage to face dangers and challenges only those of us who have experienced infantry combat would fully understand.”

And Mullikin’s service to the state will not end with his retirement from the SCSG. In mid-October, Gov. Henry McMaster issued an executive order establishing the state’s first-ever flood commisson, an executive-level body that McMaster has appointed Mullikin to chair. The commission will determine long- and short-term solutions to – and address the problems of – South Carolina’s recent disastrous flooding. In addition to Mullikin, at least nine governor-appointed members will serve the commission, including but not limited to the state adjutant general, the director of the South Carolina Emergency Management Division, the director of the State Disaster Recovery Office, the director of the Department of Health and Environment Control, the Commissioner of Agriculture, the state Transportation Secretary, members of the 1st and 7th U.S. congressional districts, state legislators, and others to include commanders of U.S. military installations along the coast and relevant academic experts.

For Mullikin, it’s less about him personally than those under his leadership, whether that’s in uniform or on the way to a summit. “At the end of the day,” he says, “any worthwhile effort may be summed up in the simple military maxim: mission first, then the men (and today women), lastly me.”

Not a feel-good statement to Mullikin, but a working formula for life.