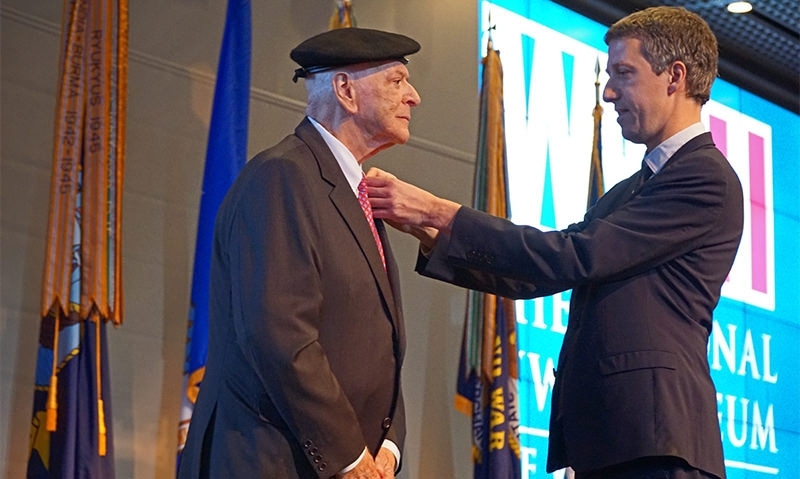 American Legion Past National Commander William Detweiler was honored Friday in a ceremony at the U.S. Freedom Pavilion at the World War II Museum in New Orleans when he received the French National Order of Merit by Consulate General of France Vincent Sciama.

“You're a strong partner, and France is so proud of your work and your partnership,” Sciama said at the ceremony attended by more than 100, including top officials of the museum, which Detweiler has helped make one of the nation's most-visited shrines to American military service.

The National Order of Merit is an honor awarded by the president of France to French citizens or foreign nationals who have exhibited distinguished civil or military achievements. It is second-highest honor bestowed by the Republic of France.

Since the establishment of the award in 1963, notable French artists, athletes, scientists, diplomats and members of the military have received the honor, including oceanographer Jacques Cousteau, actor and filmmaker Gérard Depardieu and Presidents Charles de Gaulle and François Mitterrand.

Royalty and heads of state from around the world, ambassadors and members of the military have represented non-French recipients, including such notable Americans as Gens. Wesley Clark and Anthony Zinni, Comanche Code Talkers Charles Chibitty, Roderick Red Elk and Forrest Kassanavoid, and another American Legion past national commander, Wilbur C. "Dan" Daniel of Virginia, who led the nation's largest veterans organization in 1956 and 1957.

The National Order of Merit specifically recognized Detweiler's work at the National World War II museum. Currently consultant for military and veterans affairs at the museum, his work with the museum began even before ground was broken at the popular and growing institute dedicated to the memory of World War II.

“There ought to be 1,000 bricks with his name inscribed around this museum for all he has done," museum co-founder and CEO/President Emeritus Nick Mueller told the crowd gathered for the ceremony. "He's been a tireless champion and advocate for this museum and its mission, on local levels, on national levels, and international levels."

Mueller shared how Detweiler's support in the late 1990s help make the D-Day Museum (its original name) a reality, how he connected local leaders, DoD officials and French authorities to stage grand opening ceremonies for the museum in 2000, how he helped forge an alliance with the Caen Memorial Museum in France and launched the annual World War II Conference at the museum in 2007 when it re-opened after Hurricane Katrina.

Mueller said that throughout all of Detweiler's work on behalf of the National World War II Museum, "his voice has always been clear, his passion authentic, and his belief in our mission, unwavering.”

Museum CEO and President Stephen Watson also spoke of the positive influence that Detweiler's dedication has on the museum experience.

“He takes the detailed time to ensure we are connected with veterans, providing them with the best experience here at the museum ... that when we engage with military and veterans organizations, they leave this museum feeling that they are part of our family. That comes from the heart, and that comes from his deep, deep passion for the services and sacrifices they have made.”

Upon accepting the National Order of Merit, Detweiler gave credit back to those who supported him in his many roles over the past 50 years of service to veterans. "I have received many accolades and awards over the years, but I would not have received these awards if it had not been for the women and the men who supported my leadership. Without the wonderful staff of this museum, I would not have been singled out for this award. So tonight I humbly accept this award for myself, and for the great staff of this museum.”