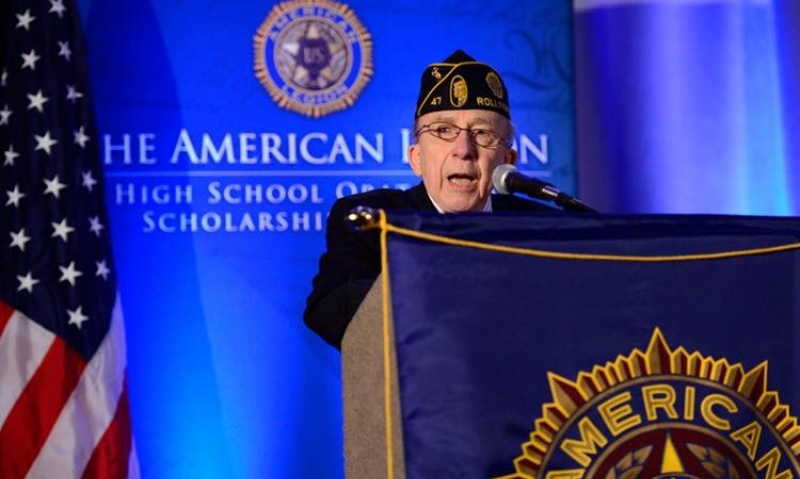 It is with great sadness that The American Legion announces the passing of Joseph E. Caouette, a longtime, dedicated Legionnaire who served 18 years as the organization’s National Americanism Commission chairman and then chairman emeritus.

A U.S. Marine Corps veteran of the Korean War, Caouette was a 68-year member of American Legion Martel-Roberge Post 47 in Rollinsford, N.H., where he held almost every position at the post and district level. He served as the Department of New Hampshire commander from 1979-1980, National Vice Commander from 1989-1990, and as a member of the National Executive Committee from 1987-1989. Caouette is known for his work on several national and department committees and commissions, including his time serving as Americanism Commission chairman, Department Oratorical chairman and National Citizens Flag Alliance department chairman.

During his tenure on the department’s Oratorical Committee, Caouette helped start the first-ever Junior Oratorical Contest. He too was instrumental in enhancing the American Legion Baseball program both in the Department of New Hampshire and at the national level.

“Joe Caouette exemplified what it means to be a member of The American Legion - community, state and nation. He did it at every level and inspired new generations of veterans,” said National Commander Brett Reistad. “Americanism Commission Chairman Joe will be remembered in our organization as a leader, innovator and force for patriotic values. His leadership, especially as we have continued to fight for protection of our nation’s flag and other values that identify and strengthen America, is irreplaceable but will guide our continuing efforts to strengthen America in many ways.”

Along with his dedication to The American Legion, Caouette served his community as postmaster of the Rollinsford and Somersworth post offices, town moderator, town selectman and zoning board commissioner. He too was a lifelong member of St. Mary’s Parish in Rollinsford where he served as a lector, Eucharistic minister, member of the pastoral council, and chair of the 150th anniversary committee.

"The sudden transfer to post everlasting of Joseph E. Caouette has left a void not only in the Americanism Commission, The American Legion at all levels, but especially the hearts of all who have been fortunate to have associated with him," said Americanism Commission Chairman Richard Anderson. "Joe’s unwavering journey through a life committed to a 'one hundred percent Americanism' has affected the lives of countless of hundreds of youth and adults of this great nation who never had the honor of knowing him. Joe’s many years of leadership and guidance as our chairman has set a standard that serves as an inspiration for us to strive to enhance and promote the many aspects that the Americanism Commission has been taxed with over our 100 years of service to 'God and Country.'

"In my initial year as chairman, many referred to me not as chairman but as Joe’s replacement. Joe, I will do my best with the knowledge and experience that you have left with me and the commission to continue to maintain your most honorable legacy. I never did know your shoe size, but I and others that are honored to chair this great commission will never fill them. Rest in your well deserved peace after a job well done."

Funeral arrangements for Caouette include visitation from 4-6 p.m. on Sunday, Dec. 30, at the Tasker Funeral Home, 621 Central Ave Dover, NH. There also will be visitation from 9-10:45 a.m. on Monday Dec. 31, at Tasker Funeral Home, incuding a 10 a.m. Post 47 ceremony, followed by a 11 am. mass at St. Mary’s Church, Church Street, Rollinsford, NH. Burial will follow at St. Michaels Cemetery, and a reception will take place at Post 47.

In lieu of flowers the family asks that donations be made to American Legion Post 47’s scholarship fund or a charity of your choice. Post 47’s address is Foundry Street, P.O. Box 478, Rollinsford, NH, 03869.