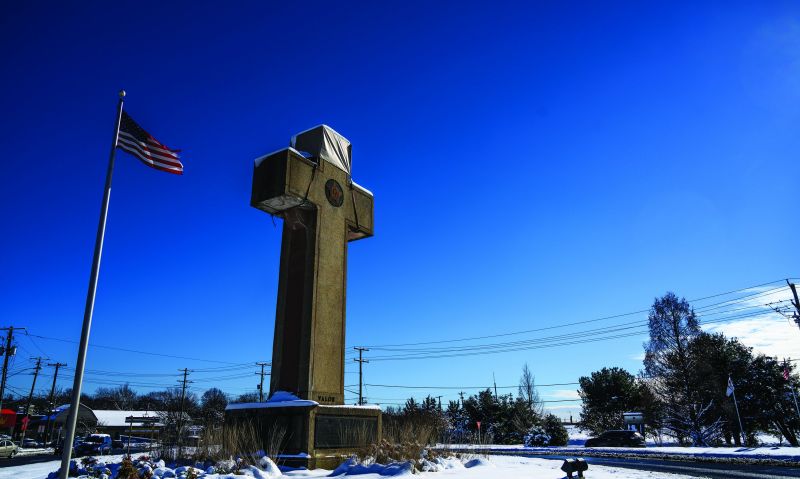 The Bladensburg World War I Veterans Memorial in Prince George's County, Md., is in danger of destruction pending the results of an upcoming Supreme Court case. The names of 49 veterans from Prince George's County who died during WWI are memorialized on the cross. Matt Roth/The American Legion

When Michael Moore was as young as age 8, his father took him to the Bladensburg World War I Veterans Memorial in Prince George’s County, Md. There Moore learned about the service and sacrifice of the 49 men whose memories are enshrined on the memorial.

Moore followed in his father’s and grandfather’s footsteps, joining the Army. During World War II, his dad fought at Guadalcanal and his grandfather served in World War I in the Argonne Forest.

“My father told me that this is what this country does to remember those who served in the armed forces,” he said. “And it stuck with me forever because he revered the place. It’s a place of honor and solemnity. And it’s a point of pride for my father and myself.”

As commander of American Legion Post 136 in Greenbelt, Md., Moore has overseen memorial events at the site. “I’ve been involved in remembrance my entire life, starting with my father, who taught me, quite frankly, that we have to respect the service and the sacrifice of our veterans.”

The memorial had been erected decades before Moore saw it for the first time. In 1925, The American Legion and Gold Star Mothers dedicated the cross-shaped memorial to honor 49 Prince George’s County men who made the ultimate sacrifice in World War I. The mothers agreed upon the cross shape as an homage to the grave markers standing over the American graves scattered around Europe after World War I.

For more than 90 years the memorial quietly honored the 49 veterans and their families. But in 2017, the U.S. Court of Appeals for the Fourth Circuit declared it violated the Establishment Clause of the First Amendment to the U.S. Constitution. On Feb. 27, The American Legion, represented by First Liberty Institute and Jones Day, will present oral arguments to the U.S. Supreme Court. A ruling is expected by July 1.

When he heard about the lawsuit, Moore “felt violated. I felt like there were people who didn't understand the depth of the passion that folks have for honoring fellow veterans. And it made me angry.”

The Legion is defending the memorial so that the memories and sacrifices of the 49 Prince George’s County men will continue to educate generations who pass by. It’s a sacrifice Moore and other veterans understand.

Joseph Pruden has driven by the memorial countless times. As a fourth-grader, his family moved to the area.

Phillip Holdcraft has overseen American Legion commemorations at the site on Veterans Day and Memorial Day. The lawsuit by the American Humanist Association upset him.

“They have a right to make that argument if they want to make that argument,” said Holdcraft, past commander of Post 131 in Colmar Manor, Md. “We don't think it's right because first and foremost, it's a veterans memorial. It just happens to be in the shape of a cross. As a veteran, we support our veterans. That's what The American Legion is all about. We honor our veterans. It was just kind of a slap in the face, if you will.”

If the Supreme Court rules that the memorial can remain where it has stood since 1925, Holdcraft will once again preside over the Veterans Day ceremony in November.