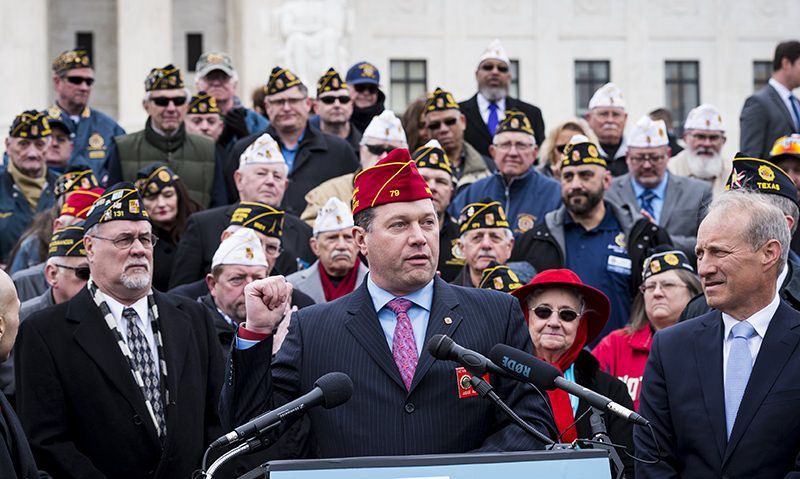 Roughly five miles from where a memorial has recognized the sacrifice of 49 World War I veterans since 1925, The American Legion fought for their rights during oral arguments Feb. 27 at the U.S. Supreme Court.

At the heart of the controversy is whether the Bladensburg World War I Veterans Memorial can remain on public land amid other veterans memorials in Prince George’s County, Md. The constitutional test is known as the First Amendment’s Establishment Clause, which bars the government from establishing an official religion and favoring one religion over another.

The memorial has stood peacefully for decades until the American Humanist Association (AHA) filed suit, claiming the memorial violated the First Amendment.

The American Legion was represented by the legal teams at First Liberty Institute and Jones Day. Aligning with them was the state of Maryland, which owns and maintains the memorial.

“This is a really important day,” said Kelly Shackleford, president and CEO of First Liberty Institute. “Almost 100 years ago we had mothers who lost their sons in World War I, as well as The American Legion, decided to put up a memorial for those who had given the ultimate sacrifice. It was put up to honor the 49 young men who gave their lives for our country. And the idea that we are talking about today about whether we are going to tear down this memorial is really a disgrace.”

Neal Katyal, an attorney for Maryland, opened the hearing by noting that the memorial does not contain any religious words. Instead the words “valor, endurance, courage and devotion” are emblazoned on the memorial, along with the names of the 49 veterans.

During the lively 75-minute hearing, Justices Sonia Sotomayor and Ruth Bader Ginsburg asked pointed questions of the lawyers supporting the memorial. Sotomayor asked whether the memorial could simply be moved or transferred to a private entity. “If you move it, because of the cracks in this cross, it very well may be destroyed,” Katyal explained, adding that there are traffic concerns near the memorial which conclude it from being privately owned.

Sotomayor, questioning the value of keeping the memorial based on its historic nature, noted there are few large crosses on public land. “We don’t have a long tradition of that. It’s sectarian,” she said.

On the other hand, Justice Samuel Alito showed support for the memorial. Alito questioned Monica Miller, the AHA’s lawyer, on the fate of other crosses on public land if she were to win. “Do you want them all taken down?” Alito asked.

It was an apparent reference to the concern that if Bladensburg is torn down, AHA will go after other memorials, including those in revered places like Arlington National Cemetery.

That does not pacify veterans like Johnny Evans, a 40-year member of and past commander of Post 275 in Glenarden, Md. Evans has attended dozens of Veterans Day ceremonies at the Bladensburg memorial.

“A lot of people lost their lives in the war,” said Evans, a two-tour Vietnam War combat veteran. “There’s a lot of history there. It’s kind of like a cemetery to me — and you don’t dig up cemeteries.”

Evans knows about 30 veterans whose names are on the Vietnam Wall. “Once they start chipping, what are they going to take down next? Veterans cemeteries? Anything that we have that honors veterans in wars should be preserved.”

The Bladensburg memorial was funded privately and the property where it stands was in private hands when it was erected. However, now it sits on land owned by the Maryland-National Capital Park and Planning Commission, a governmental agency.

Supreme Court Justice Chief John Roberts asked Miller about Native American totems that have spiritual and religious significance. “If one of those is on federal property, does it have to be torn down?”

“I think we would have to understand more about the symbolism and what it means if there is some sort of dual secular meaning, such as with the Ten Commandments, how it's basically shorthand for law itself,” Miller said in the ornate courtroom, which itself has sketches of the Ten Commandments.

American Legion National Commander Brett Reistad noted the symbolism of the timing of the oral arguments.

“I found the timing of the hearing before the Supreme Court to be appropriate,” Reistad said. “I was on Capitol Hill, fighting for the rights of veterans, servicemembers and their families before Congress. And, just a quarter-mile away, The American Legion was defending the rights of World War I veterans and the wishes of Gold Star Mothers. Of course, it was the veterans of World War I who created The American Legion to advocate and support veterans almost exactly 100 years ago.”

To Reistad and other veterans, it is unthinkable to tear down a memorial.

“First and foremost, it is disrespectful to the veterans who made the ultimate sacrifice for their nation and their families who bore the brunt of the sacrifice,” Reistad said. “This memorial does not bring harm to anyone. It is merely a way for the families of the 49 men and the community at large to remember the heroes who called Prince George’s County home.”

Showing support for their comrades from a century ago were more than 50 members of The American Legion. While few were able to attend the testimony in the packed courtroom, they commanded a presence outside during the press conferences that followed.

“I stand here in a very humbled position because these are the heroes of our country,” said Bartlett, motioning to the Legionnaires. “All of these men and women wearing their hats signed a piece of paper — they weren’t asked what religion they were — and went off to defend our nation. Just like the 49 heroes that are on that memorial.”

Bartlett recalled the founding of The American Legion, which occurred 100 years ago next month when World War I veterans founded what has become the nation’s largest and most influential veterans service organization.

“I am saddened, just like everyone behind me is saddened, to be here today because those Gold Star Mothers did what they had to do and they erected a memorial to their sons. It can’t go away. The American Legion was founded to preserve the memories and incidences of the great wars,” Bartlett said, referencing The American Legion’s preamble to its constitution. “That’s why we are here today — to keep remembering those heroes.”

After the arguments, legal scholars suggested that the judges seemed to be leaning toward The American Legion’s side in the case. A ruling is due by July 1.

However, Shackleford issued caution while bemoaning the maligned Lemon test. (The Lemon test is used to determine if a law violates the First Amendment.)

“You never know what the court is going to do until they issue their opinion,” he said. “But everybody recognizes that the Lemon test is in hopeless disarray. It is creating confusion throughout the courts and it is causing these attacks on veterans memorials and monuments across the country. I think the court clearly wants to change that. We’ll wait to see what they do but we are encouraged by the way things went today.”