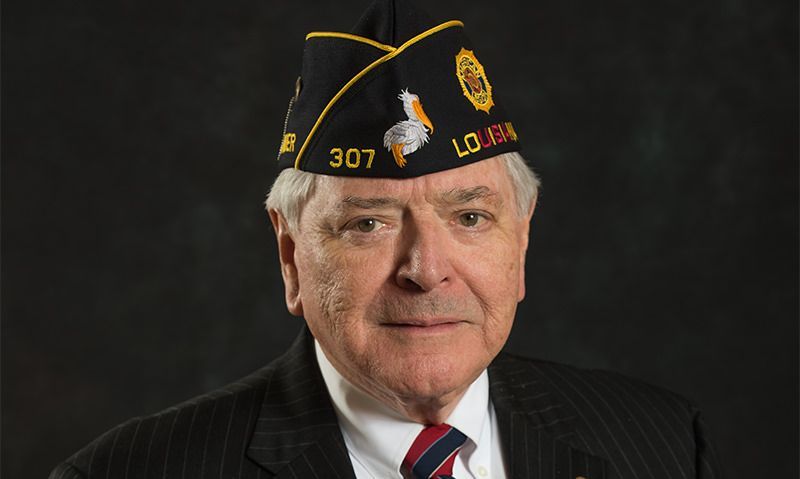 It allowed Comer many interactions with his Louisiana counterpart, a practicing attorney in New Orleans. And to Comer, Detweiler was both a special person and incredible asset to The American Legion.

“He was a gentleman personified,” Comer said. “You could always stop and talk to Bill and get any legal question answered without a problem. He was on the (National) Commander’s Advisory Committee and always had the right things to say. We depended on his expertise. He was knowledgeable about just about everything, and was just a great guy. We’re going to miss him.”

A 53-year member of American Legion Post 307 in New Orleans and The American Legion national commander from 1994 to 1995, Detweiler passed away March 27 at age 79. Those who knew him are left with fond memories.

Past National Commander Dan Dellinger knew Detweiler for nearly 25 years and will attend his funeral. When the two first met, Dellinger said that Detweiler “through his accomplishments, was at a higher level than I was. The one thing that really stands out to me is that he was compassionate to all. One of the first times I had a chance to talk to him was at a reception during the Washington Conference. He came to me and wanted to talk to me when he could be talking to other past national commanders and higher-ups. And he spoke with me for 15 minutes. It meant something to me.”

Dellinger said that Detweiler was able to adapt to take on challenges as they came up, from those facing veterans 25 years ago to issues happening today. “It goes to his character,” he said. “He was a one-of-a-kind person. He took everything on straight forward. He saw a problem and he knew that we needed to deal with it because it affected the veterans of this country. No matter what someone asked him to do, he not only did it, but he did it with extraordinary finesse and courage. He would take that ball and run with it every time.”

Detweiler served as a captain in the U.S. Army Intelligence Corps, performing the role of Operations Officer at the U.S. Army Air Defense Center in Fort Bliss, Texas. He then joined the U.S. Army Reserve while returning to New Orleans for a career in law.

Despite a busy law practice, Detweiler found time to serve on various national, state and local veterans and military commissions and committees, including being appointed by President Richard Nixon to serve on the Veterans Administration National Rehabilitation and Education Advisory Committee, which he chaired two years later.

On The American Legion side, he served as Department of Louisiana judge advocate from 1970 to 1985 and took on leadership positions on national commissions and committees, including the Public Relations Commission and the Foreign Relations Commission chairman before being appointment as national vice commander from 1986 to 1987.

Seven years later Detweiler was elected American Legion national commander during the national convention in Minneapolis. As national commander, Detweiler called for research into what was causing Persian Gulf veterans do develop health issues after returning home. “How can we prevent the Persian Gulf illnesses from becoming another Agent Orange-type disaster?” he asked. “The government must treat Gulf War GIs who are sick. The government must find out why they are ill. The American Legion is keeping an eye on how the government deals with this problem. We don't want to see a delayed and flawed series of studies on these illnesses reminiscent of Agent Orange. We need serious unbiased studies and we need them now.”

On the POW-MIA issue, Detweiler was the first American Legion national commander to visit Vietnam since the end of the war. During the trip Detweiler said he was told by the Vietnamese Deputy Defense and Deputy Interior minister that the POW/MIA issue was a humanitarian issue. “If he is sincere,” Detweiler wrote in the January 1995 American Legion Magazine, “now is the time for his nation to act with a humane spirit and release the documentation that we know it has.”

Detweiler urged the United States to not resume trade with Vietnam until the U.S. learned the fate of its missing servicemembers. “POW/MIA families … deserve to get prompt information on their loved ones and respectful treatment,” Detweiler said. “Protecting the men and women we send into combat must become a priority. When we lifted the economic embargo on Vietnam without the fullest possible accounting, that was a sign that our nation has learned little from its past POW/MIA debacles. The American Legion believes the Vietnamese government has information and documentation about the fates of our MIAs and POWs.”

And in one of the highest-profile issues during his tenure as national commander, Detweiler came out openly against a planned Smithsonian exhibit of the B-29 Enola Gay, which dropped the bombs that ended World War II in 1945. Detweiler wrote President Bill Clinton that officials of the Smithsonian’s National Air and Space Museum insisted on including “highly debatable information which calls into question the morality and motives of President Truman’s decision to end World War II quickly and decisively by using the atomic bomb.”

Detweiler demanded an exhibit that included a balanced interpretation. The demand was met; a display of the historic aircraft, interpreted fairly, has been in place at the National Air & Space Museum at Dulles International Airport since 2003.

“We stood up to the revisionist historians," Detweiler told delegates at the 1995 American Legion National Convention in Indianapolis. “Dropping the bombs was proper, and we as a people have nothing to apologize for.”

“That’s a pretty tough spot, and he handled it with amazing effectiveness with class,” Ludwig said. “I’m glad that issue was in his year and not the next year in mine.”

Ludwig said he knew Detweiler “really well” for more than 25 years. Detweiler, Ludwig remembered, was adept at dealing with those owning a difference of opinion on a specific issue.

“He could convey (his opinion) to somebody who totally disagreed without being harsh or mean or nasty,” Ludwig said. “He valued truth and fairness to an amazing degree. He was an amazing gentleman.”

Ludwig also remembered Detweiler talking to all as an equal. “Bill was a learned attorney. He was a man of amazing accomplishments in many arenas,” he said. “I’m a high school graduate and pretty much to a large extent, my accomplishments that I may have are pretty much in the Legion.

“Bill always treated me with respect. He always treated me … I felt every time he and I spoke, I was talking to a true friend who valued me as a person and as a fellow veteran. His sense of even-handed fairness was amazing.”

After his tenure as national commander ended, Detweiler took on additional leadership roles that included serving on the National Commander’s Advisory Committee, and serving as president of The American Legion Endowment Fund Corporation board of directors and chairing The American Legion TBI/PTSD Committee.

As chairman of the TBI/PTSD Committee, Detweiler led efforts to address and treat the signature wounds of the war on terrorism: traumatic brain injury and post-traumatic stress disorder. Detweiler was a vocal proponent of hyperbaric oxygen therapy for veterans coping with TBI and PTSD and urged research into other alternative treatments for both injuries.

After Hurricane Katrina devastated New Orleans in 2005, Detweiler was a guiding force in getting the New Orleans VA Medical Center rebuilt, serving on the advisory committee for the project's design team. He was at both the new facility’s groundbreaking and grand opening and is credited with crafting the words now engraved in stone at the front entrance of the medical center: “THE PRICE OF FREEDOM CAN BE SEEN WITHIN THESE WALLS.”

Detweiler also was instrumental in bringing what is now the National World War II Museum to his city. He served as a member of the executive leadership team for the museum – which draws more than 700,000 visitors a year – until his death, and as recently as May 2018 served as master of ceremonies for the museum’s Memorial Day ceremony.

In December 2018, Detweiler was presented the French National Order of Merit by Consulate General of France Vincent Sciama. Detweiler was honored for his work at the museum, including helping launch the annual World War II Conference at the museum in 2007 when it re-opened after Hurricane Katrina.

“There ought to be 1,000 bricks with his name inscribed around this museum for all he has done," museum co-founder and CEO/President Emeritus Nick Mueller said last December. "He's been a tireless champion and advocate for this museum and its mission, on local levels, on national levels, and international levels."

But in typical Detweiler fashion, the past national commander was quick to deflect praise after receiving the French National Order of Merit. “I have received many accolades and awards over the years, but I would not have received these awards if it had not been for the women and the men who supported my leadership,” he said. “Without the wonderful staff of this museum, I would not have been singled out for this award. So tonight I humbly accept this award for myself, and for the great staff of this museum.”

Relatives and friends are invited to attend the memorial mass in the Chapel of Lake Lawn Metairie Funeral Home, 5100 Pontchartrain Blvd., New Orleans, on Monday, April 1, 2019 at 1 p.m. Visitation will begin at 11 a.m. Interment will be private. Donations to the National WWII Museum in his name will be appreciated.

To watch a video of PNC Detweiler reflecting on his year as American Legion national commander and the New Orleans veteran community rebuilding after Hurricane Katrina, click here.