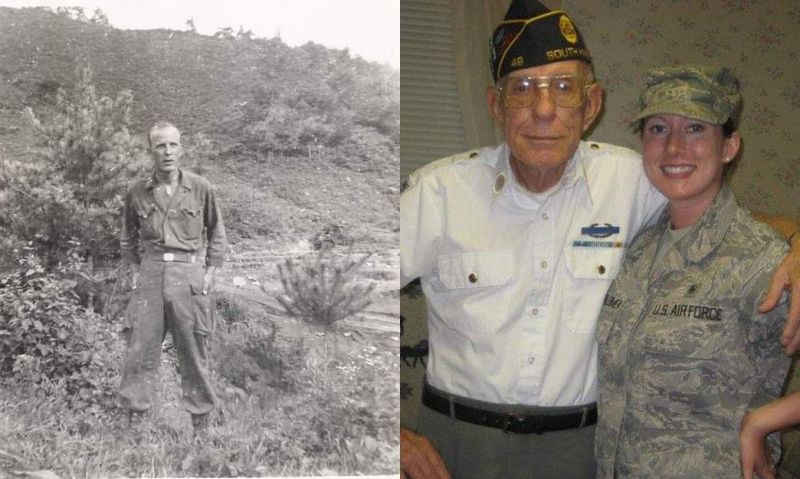 Early this month we asked our members to share with us those they have a special appreciation for who are serving or have served in the military. The following are the submissions that we've received so far through either Facebook or Twitter.

• From Stacey Marie (via Facebook): My grandfather, SFC George Bartholomew (pictured above), veteran of the Korean War, 1951, Infantry. Was a lifetime member of the American Legion, the Post Commander three times, and was a longtime member of the Honor Guard in South Haven, MI. His service influenced me to join the military (I'm 13 years in still) and also The American legion (judge advocate of post Rhein Main). I am very proud of him and he was a great comrade to all.

• Meg Krebs (via Facebook): Frank J. "Jerry" Carroll. Born January 5, 1943 in Denver, Colorado. Jerry displayed his artistic abilities throughout his school years. An exceptional student, he was advanced a grade and still placed in accelerated classes. His artistic abilities found him starring in plays, doing the artwork for stage backdrops, drafting, oil painting, artwork and covers for the Colorado Engineer (University of Colorado Publications). After Graduating from C.U. with a Bachelor of Arts Degree, he joined the Peace Corps. A delay in transportation resulted in an immediate change as Jerry determined the United States Marine Corps was his Destiny. Marine Frank Jerome "Jerry" Carroll was killed in action on April 1, 1969, while flying his Helicopter, during a combat mission in Vietnam. The original organizing members of the Marine Corps League in Denver, Colorado felt that this Marine exemplified the qualities that we pride ourselves for as Marines. Marine Carroll's mother, Margaret Carroll-Boyce, graciously allowed us to name our Detachment after her son. We will always be proud to be associated with the name of this very brave Young Man.

• @Von_Clown (via Twitter): My Nephew Jason, stationed in South Korea. He’s learning (and) growing as a person and as a man. So proud of him. #Whoiappreciate

• @timothyhornik (via Twitter): While most think of my service, my wife's service as a Rear D commander multiple times, observed sexism, and willingness to show her selfless service despite various hardships continues to amaze me. We owe our female warriors more gratitude and honors then we give them.

• @chris30542 (via Twitter): I appreciate all our #military men and women past and present. My special connection to them is my ability to live here safely and freely because of their service to our country. And for that they’re always #WhoIAppreciate way beyond

Those who still want to share their appreciation for veterans and members of the military can do so through the end of Military Appreciation Month by emailing sbrooks@legion.org or sharing them on Facebook and Twitter using the hashtag #WhoIAppreciate.