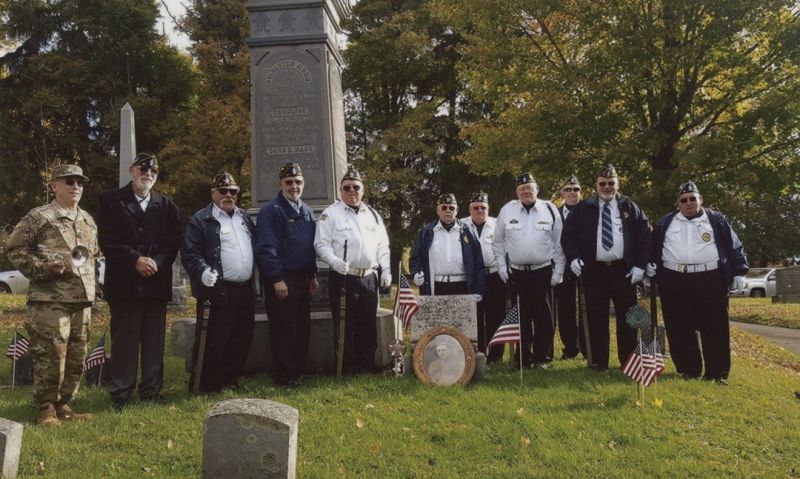 Sgt. Fred L. Stilson was 19 when he graduated from the Albany Pharmacy College in New York. Less than two years later, after the United States entered the Great War, he enlisted in the U.S. Army and found himself in the midst of an epidemic that killed more U.S. troops in World War I than enemy fire.

Fred L. Stilson Post 57 of Cobleskill, N.Y., gathered at the cemetery where their namesake is laid to rest on Oct. 16, 2018, the 100th anniversary of his funeral. Stilson’s nephew, Post 57 Commander Richard Frank, delivered the following tribute:

“Today, we honor a hero.

Fred was born in March of 1896 in Warnerville, N.Y., at the home of his grandparents, Alex and Augusta Larkin. He was the son of Mert and Ada Stilson, my grandparents.

Fred enlisted in the U.S. Army on June 5, 1917, as a member of the Medical Corps. He was assigned to duty at Fort Ontario, Oswego, N.Y., Base Hospital No. 5. His duty was to operate the pharmacy. Because of the shortage of pharmacists, he was alone in the dispensary much of the time during the summer of 1917. He attended to some 1,500 patients, most of whom were suffering from influenza.

Fred was tired and sick, but because the other boys needed help, he worked on and on, day and night, filling prescriptions. It was noted that five or more boys were dying each day.

On Oct. 3, 1918, Fred had a temperature of 103.5. Like so many others, he had contracted influenza. His condition worsened, and he was admitted to the pneumonia ward.

His parents were summoned to Oswego on Oct. 6, 1918, to be at his bedside to comfort him. His fiancée, Miss Harriet Barnum of Cooperstown, N.Y., was also summoned.

Fred L. Stilson died on Oct. 12, 1918, at 10 a.m., a Saturday morning, at Fort Ontario. His remains were escorted home by Cpl. Ralph Young, a chum and comrade at Fort Ontario.

Sgt. Fred Larkin Stilson was buried with military honors at this site, Larkin plot at the Cobleskill Rural Cemetery. The honor guard fired three volleys on that day, and Taps was sounded by bugler C.F. Boughton.

Sgt. Fred L. Stilson gave his last full measure of devotion at the age of 22.”