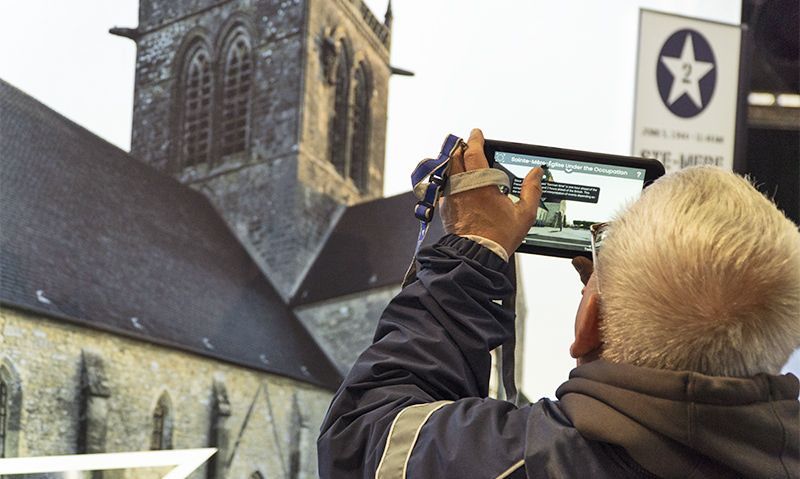 A visitor to the "D-Day: Freedom From Above" exhibit at the National Museum of the U.S. Air Force uses an electronic tablet to immerse himself in the liberation of Ste. Mere-Eglise on June 6, 1944. Photo by Jeff Stoffer

Maurice Renaud was a small boy when U.S. paratroopers descended on his home village in Normandy to liberate France from German occupation during World War II. It was the night before D-Day, June 6, 1944.

On Monday, nearly 75 years later, Renaud relived some of that history through augmented reality at the Museum of the United States Air Force near Dayton, Ohio. There, he peered into an electronic “histopad” featuring 3-dimensional digital images of Ste. Mere-Eglise before, during and after the Allied invasion.

“I think it’s absolutely fascinating,” Renaud said after a preview of the interactive exhibit. “Each detailed explanation is really great. You feel like you are part of the action.”

Visitors of all ages took in the exhibit after a ribbon-cutting Monday at the museum. The “D-Day: Freedom from Above” exhibit will be at the museum through the end of 2019.

Ste. Mere-Eglise was the first town liberated on D-Day. Paratroopers of the 82nd and 101st Airborne Divisions jumped in the night before the famous beach landings at dawn on June 6, 1944. Ste. Mere-Eglise was also the resting place of Brig. Gen. Theodore Roosevelt Jr., one of The American Legion’s primary founders, who died at age 56 five weeks after coming ashore in the first wave at Utah Beach.

The opening of the interactive exhibit includes such features as a virtual jump from a C-47 into the village on the night of the assault, an inside look at a temporary hospital, a visit to the Battle of La Fiere Bridge and more using the “histopad” tablet. “This is a new way to create curiosity and interest among visitors for them to relate, in a personal and moving manner, to the museum artifacts, weapons, gear and all the collection on display,” explained Bruno de Sa Moreira, co-founder of Paris-based Histovery, which has produced about 15 similar exhibits, all in Europe. “By doing so, we try to perpetuate the memory of those days.”

The pads have touchscreen dots of light that, when pressed, produce videos, descriptions and information about the people who fought and served in the airborne mission. “We tell the stories of real people,” de Sa Moreira said. “We know where they jumped and what happened to them. So, you have this original mix between technology that comes from the new media, digital 3-D images that we use and the animation that we create, and the messages of history.”

“The reason we brought it here was to commemorate the 75th anniversary of D-Day, in the short term,” explained Mike Imhoff, executive director of the Air Force Museum Foundation. “The long-term reason we brought it here is because we know this will change forever the landscape of how people will interact with this museum. Less than 5 percent of the museum’s collection is on display. Expansion is limited by capital – economic capital or space … This has the opportunity to introduce the visiting public to assets the museum has in its collection that they have never seen before.”

He said the video-game style animation will help the museum “connect, educate and inspire those kids, and other folks who come here, about the heritage of the United States Air Force, about why it’s so important.”

The 10-panel exhibit is “based on video-game technology, but it’s not a video game,” said Edouard Lussan of Histovery. “It’s built on something entertaining and interactive, something which will allow people to get immersed, to have their own experience at their own rhythm, in their own language. This is the vocabulary of video games. We are using video game technology for mass-market audiences, not for the gamers. It’s very, very different, in fact.”

A similar exhibit is now on display at the Airborne Museum in Ste. Mere-Eglise, an annual stop for The American Legion national commander and his group during official visits to the Department of France each year. Magali Mallet, director of the recently expanded museum in Normandy, came to Dayton for the opening at the U.S. Air Force Museum. She said the augmented reality feature has been a hit in France “and not only for young people. Visitors rate it 4.3 out of five – this is a good rating. Our visitors are saying it is very interesting for families. Sometimes, for children, a museum is boring. It is not a game, but it is made for children to be interested.”

A 25-member Histovery team worked one year to develop the D-Day exhibit.

Imhoff said the accuracy of the exhibit was studied both in France and in Dayton. “The curatorial staff went through every piece of content, and they found minor – only minor – recommendations,” he said. “And this team is very particular. I’ve never seen curators smile so much.”

Hundreds of visitors were on hand for the Monday ribbon-cutting, which featured U.S. Air Force Headquarters Director of Staff Lt. Gen. Jacqueline Van Ovost, who applauded the exhibit not only for its technology but for the message it sends. “The opening of this exhibit celebrates the sacrifices and heroism of these brave Americans, who on D-Day gave their very best,” she said. “The entirety of our nation had mobilized to win. We were all in. We did anything and everything necessary to succeed in this war. We built over 300,000 aircraft during the war, including 95,000 in a single year. For reference, we have 5,300 aircraft in our Air Force now. Millions of Americans mobilized for this fight, and millions more supported all of the efforts back home.

“This exhibit represents those who came before us, in service to America – those who sprinted forward with courage, a proud determination and a commitment to freedom that all of our servicemembers today look up to.”

David Tillotson III, director of the National Museum of the U.S. Air Force, said “it’s also to inspire the youth of America to remember the sacrifices of those who went before them, and also to inspire them to contribute to their country.”

Following the opening in Dayton, Renaud – son of D-Day Ste. Mere-Eglise Mayor Alexandre Renaud – traveled to Cincinnati for a panel discussion before nearly 500 Sycamore High School students and a luncheon later before nearly 300 members of the Kenwood Country Club, along with a half-dozen or more World War II veterans. He joined Cathy Soref of Locust Valley, N.Y., co-founder of Operation Democracy, a post-World War II program that was rekindled in 2005 to build relationships between Ste. Mere-Eglise and Locust Valley.

Following a day of speaking and media interviews, Renaud appeared at the Great American Ballpark in Cincinnati where he was named honorary captain for the Reds before their game against the Chicago Cubs.