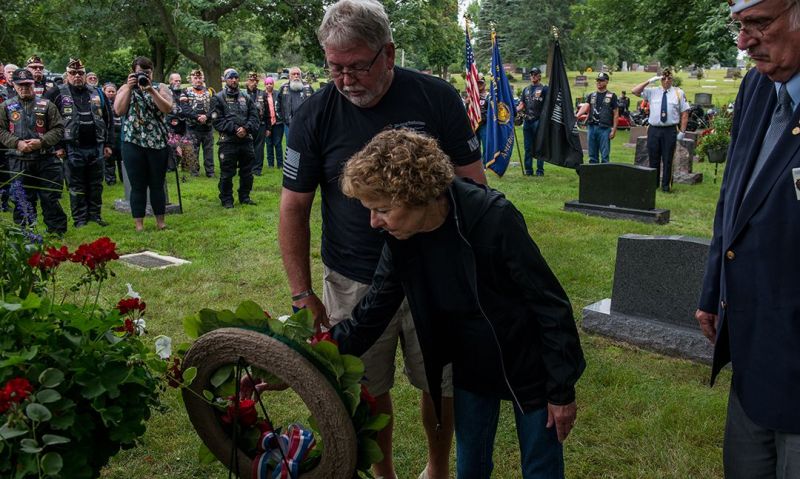 Parents of Army Chief Warrant Officer 3 Corey Goodnature lay a wreath on his grave at Graceland Cemetery in Albert Lea, Minn. Goodnature was killed on June 28, 2005, in eastern Afghanistan when his MH-47D helicopter was shot down by enemy fire. Photo by Justin L. Stewart/The American Legion

More than 1 million men and women who have lost their lives defending America in wars from the Revolution to the global war on terrorism will be remembered on Memorial Day. Flags will be placed at gravesites, ceremonies and parades will be held, and many more events will occur nationwide to honor those who made the ultimate sacrifice.

In honor of Memorial Day, here are some things you may not know about the holiday.

1. Memorial Day was originally called Decoration Day. Gen. John A. Logan, commander of the Grand Army of the Republic, called for a day of remembrance on May 30, 1868, "for the purpose of strewing with flowers, or otherwise decorating the graves of comrades who died in defense of their country during the late rebellion." Nearly 620,000 soldiers lost their lives in the Civil War.

2. On the first Decoration Day in 1868, Gen. James Garfield made a speech at Arlington National Cemetery, where 5,000 participants decorated the graves of the 20,000 Union and Confederate soldiers buried there. (via history.com)

3. In 1966, Congress declared Waterloo, N.Y., the official birthplace of Memorial Day for being the first town to celebrate the holiday 100 years prior. Waterloo, which first celebrated the day on May 5, 1866, was chosen because it hosted an annual event where residents decorated the graves of soldiers with flags and flowers. (via history.com)

4. In 1968, Congress passed the Uniform Monday Holiday Act, which established Memorial Day as the last Monday in May, instead of May 30, in order to create a three-day weekend for federal employees. The change went into effect in 1971. (via history.com)

5. On Dec. 28, 2000, President Bill Clinton signed into law the National Moment of Remembrance Act, which asks Americans to pause on Memorial Day at 3 p.m. local time for one minute to honor those who died protecting America’s rights and freedoms. (via time.com)

6. On Memorial Day, the U.S. flag should be displayed at half-staff from sunrise until noon, then raised to the top at full staff until sunset. (via legion.org)

7. Red poppies are to be worn the Friday before Memorial Day. The red poppy is a nationally recognized symbol of sacrifice worn by Americans since World War I to honor those who served and died for our country in all wars. The American Legion brought National Poppy Day® to the United States by asking Congress to designate the Friday before Memorial Day as National Poppy Day. After World War I, the poppy flourished in Europe. The red poppy came to symbolize the blood shed during battle following the publication of the wartime poem “In Flanders Fields.” The poem was written by Lt. Col. John McCrae, M.D. while serving on the front lines. (via legion.org)

8. The American Automobile Association estimates that more than 36 million people will travel at least 50 miles from home this Memorial Day. (via time.com)

9. The American Legion traditionally has a float in the 500 Festival Parade in the National Headquarters city of Indianapolis; as the Indy 500 is held over Memorial Day weekend, it essentially doubles as the city's Memorial Day parade. This year's Legion float has the theme "Turning the Corner Into the Next Century."

10. "Peak hot dog season" is considered to start on Memorial Day; between then and Labor Day, Americans will likely eat 7 billion hot dogs, or 818 every second during that period. (via hot-dog.org)

American Legion posts are encouraged to share at www.legiontown.org how they honor Memorial Day. A Memorial Day speech is available here.