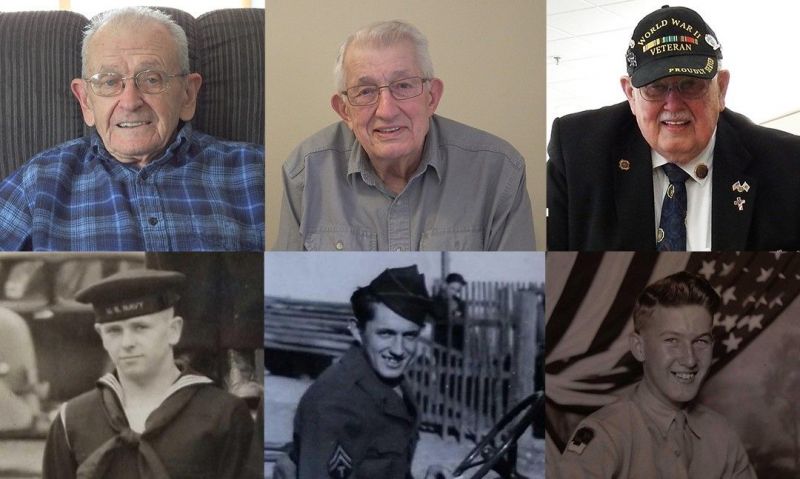 On Memorial Day, we also have the opportunity to recognize the many veterans who have honorably served our country and to thank them for their service. We are especially thankful to our oldest veterans. These veterans of World War II are dying quickly. According to the Department of Veterans Affairs, only 496,777 of the 16 million Americans who served in World War II were alive in 2018. Woodbury American Legion Post 501 in Minnesota is honored to have six living World War II veterans who are members of the post. These veterans are Emil Bartylla, John Pfulgi, Henry Kolashinki, Paul Esparza, Jane Fee and Walter Merrill. Each of these men and women came from different walks of life and were drafted into various branches of the military and served in many different roles during and after World War II.

When the United States entered World War II in December 1941, Fort Snelling became the induction point for more than 300,000 men and women who joined the armed forces. These volunteers and draftees came from all over the state of Minnesota, from the Iron Range to the prairies of Minnesota. The common characteristics they all had was patriotism and love of country. This is the story of three of Post 501 members.

Emil Bartylla was born Dec. 24, 1925, in Browerville, Minn., which is situated in the heart of Minnesota, nestled by the meandering Long Prairie River where the forest and prairie meet. Bartylla was the son of Polish immigrants and grew up on his family farm.

Bartylla was drafted into the Navy in 1944. He graduated from Boot Camp at the U.S. Navy Training Center at Farragut, Idaho, Company 6027, Regiment 1, Battalion 4 later that year. Seaman Bartylla spent the next 21 months aboard the USS California (BB-44) in L Division (i.e., lookout) where he was responsible for identification of enemy ships and aircraft as the California fought in battles in the Pacific, including the Mariana and Palau Islands. As a ship lookout, he served as the “eyes” of his ship, seeing and reporting any enemy ship or plane before it could be a danger to the ship. This required excellent vision, hearing and endurance. This was quite the change for a country boy from the prairies of Minnesota to serve on a ship the size of the USS California as it was a huge battleship. The ship displaced 32,300 long tons, was 624 feet long, had 12 14-inch/50 caliber guns as well as 14 5-inch 51 caliber guns and carried a crew of over 1,000 men. This was more people than all of Browerville.

Seaman Bartylla was serving aboard the ship when it was hit by a kamikaze during the invasion of Lingayen Gulf in January 1945 – 44 men were killed and another 155 were injured during this attack. His ship went onto fight on Okinawa during the Battle of Okinawa. After the treaty was signed aboard the USS Missouri (BB-63) at the end of the war, Bartylla took part in the occupation of Japan. Following his service aboard the USS California he transferred to the USS Denver (CL-58) where he served as a Yeoman 3rd Class performing administrative and clerical work while returning to the states through the Panama Canal. Bartylla was discharged from the Navy in Norfolk, Va. Following the war, Bartylla returned to Minnesota and worked in a number of jobs including farming with his father, construction, building bridges and automobile dealerships. Bartylla settled in Woodbury in 1956 in the town's first suburban housing development. He raised a family and enjoyed wood carving and collecting old die-cast cars. Bartylla is a vibrant, sharp man who is still active in his community, visiting friends and family in nursing homes.

John Pflugi was a born Oct. 8, 1927, in Proctor, Minn., where railroading for the nearby shops and ore classification yards of the Duluth, Missabe and Iron Range Railroad is the main business. In the first half of the 1940s, the women and men working Minnesota’s Iron Range produced an astounding 338 million tons of iron ore, fueling the U.S. war effort in steel.

Pflugi was drafted into the Army in November 1945, and was a technician fifth grade and served as a radio operator in the Third Constabulary Regiment stationed in Wetzlar, Germany, during the occupation following the end of the war. After the war, there was extreme disorder. This required a highly mobile organization to serve as a multi-capable security force in occupied areas. Since standard infantry units lacked mobility, and military police units lacked the firepower to perform the many functions that would be required, new units were formed from armor and cavalry organizations to become the U.S. Constabulary.

Pflugi arrived in France after transiting the Atlantic on a troop ship to Le Havre, France. From France, he travelled by troop rail to Ansbach, Germany, where he attended radio operator training. From there he went to Wetzlar and was stationed at the Third Constabulary Regiment. Pflugi said that the thing he remembers most from his time in the service was the level of destruction in France and the total devastation in Germany. He remembers that while he was in France that he was dismayed by how the young children had so little. American soldiers gave food scraps to children so that they would have something to eat.

Upon his discharge he made the 13-day transit aboard a troop ship during the winter. This was an arduous journey through the rough North Sea before arriving in New York where he was discharged in March 1947.

Following the war, Pflugi returned to Proctor and took a number of different jobs and married his high school sweetheart in 1950. He briefly attended the University of Minnesota Duluth majoring in engineering before attending Coyne College in Chicago where he received a technical degree in electrical maintenance. Pflugi has had an illustrious and varied career working for UNISYS, several department stores in TV service and finally spending 35 years at 3M where he worked in Control Systems Engineering in the Abrasive Division. He and his wife had five children. Pflugi is still an active member in the Woodbury community with his family and grandchildren and still loves carving.

Henry Kolashinski was born April 2, 1925, in New Richmond, Wis. He was the eighth of nine children. Kolashinski's father passed away when he was only six. At that time his family moved to Hudson, Wis. Kolashinski was drafted the first time in June 1943, but failed the eye examine and was sent home. In November 1943, he was drafted a second time and this time the Army took him. He went through military police training at Fort Custer Training Center in Battle Creek, Mich. Following police and infantry training, Kolashinski was sent to Camp Beale, Calif., which served as a German prisoner of war facility. During this time, he served as a guard at the camp.

Following this assignment, Private Kolashinki was attached to the 506th Military Police Battalion and was sent to Camp Shanks, N.Y., where he embarked for Europe. Camp Shanks at that time was the largest World War II Army embarkation camp, processing 1.3 million service personnel. The 506th Military Pollice Battalion was attached at various times during the war to the 1st, 7th and 15th Armies.

Kolashinski remembers that on the trip overseas, that only the military police worked and that the food aboard ship was terrible. His unit went from Scotland to Hereford, England, and then onto Southhampton before boarding a ship to LeHavre, France. From LeHavre, Kolashinski went by 40-and-8 boxcar to Dinant, Belgium. The 40-and-8 was designed by the French for use during World War I to hold 40 men or eight horses. Kolashinski remembers thanking God that they didn’t have horses as the trip would have gotten very messy. While in Dinant, Kolashinski was sent to radio school to learn Morse code, a skill he never got the chance to use as the jeeps they had did not have radios. From here, his company was sent forward to Erkelenz, Germany, and attached to Gen. George Patton’s 7th Army where his company was responsible for traffic control on the roads in Erkelenz. By this time, the allies controlled Erkelenz but the area was still heavily mined. This led to the only casualty Kolashinski saw during the war, the motor pool sergeant who was killed when the jeep he was in backed over a mine. As the war in Europe wound down, Kolashinski was sent to France to return to the United States. At that time, they thought they would be deploying to the Pacific, but the war ended with Japan on the trip back to the United States.

Following the war, Kolashinski was assigned to what he called a “cushy” job in Camp McCoy, Wis., riding the trains from Mankato to Wisconsin, checking to see if servicemen had proper documentation to be on leave. Kolashinski said that the food on the train was good and they had good places to sleep in Mankato. He separated from the Army as Private 1st Class June 30, 1946, after almost two and a half years of service.

Following his time in the Army, Kolashinski returned to Hudson, Wis., and worked a number of odd jobs. His first job was with Anderson Windows in Bayport, followed by Seeger Refrigerator Company in St. Paul. From there he worked at Brown & Bigelow, one of the largest printers of calendars in the world. It was here that he met his wife and was married in September 1950. After being laid off from Brown & Bigelow, Kolashinski went to work for State Farm Insurance where he worked until his retirement in 1987. He moved to Woodbury in April 1969, and has lived in the same house since. He and his wife had two children and he has 10 great grandchildren. He is active in The American Legion, his church and continues to have lunch with friends.

What an honor to have so many active World War II veterans in Woodbury. Honor them by attending the 2019 Memorial Day observance 11 a.m. on Monday May 27 at the Woodbury Veterans Memorial.