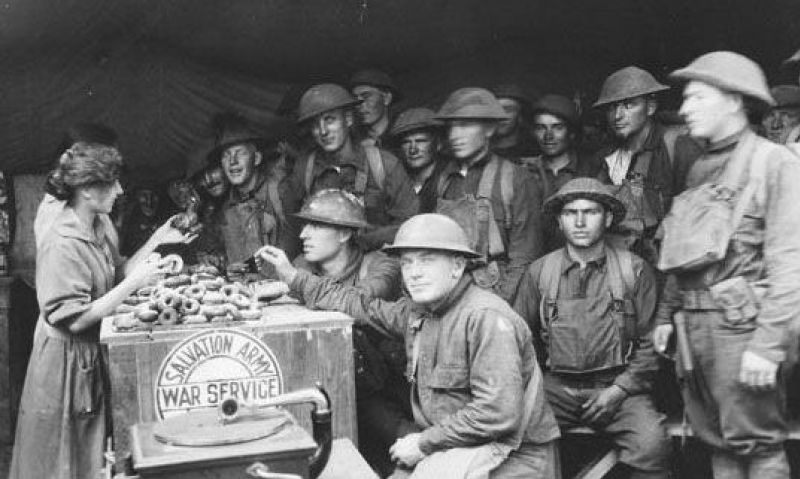 The post is opening up its doors for "Coffee and Donuts with Commander Tony." The public is invited to take a tour of the post, understand more about the American Legion Family and discover the history behind National Doughnut Day, which was created by The Salvation Army in 1938 to honor the women who served the doughnuts to soldiers in World War I. This day began as a fundraiser for Chicago’s Salvation Army to help the needy during the Great Depression.

“I discovered that the National Doughnut Day really had a history behind it that was so amazing about these ingenious brave women,” Mondy-Boyce said. “(Moreno) said ‘let’s go for it. Let’s try it.’ So far we have 30 … who are coming. I’m anticipating about 50.

“The kids are out of school here, so some of the teachers are bringing their own students. Many of us are schoolteachers or have been, and it’s kind of like ‘let’s introduce the whole neighborhood and get the kids involved’ (with the Legion Family).”

In addition to serving donuts and drinks, offering games and showing a video on the history of National Doughnut Day, Post 560 also will provide the opportunity for school children attending the event to color Fourth of July cards that will be given to patients at the Michael E. DeBakey VA Medical Center in Houston.

Mondy-Boyce said the event will touch on several aspects of The American Legion. “We see it as we’re doing the Americanism/patriotism pillar. And a lot of children are coming … so we’re doing the Children and Youth/education side. And with the cards, we’re doing the (Veterans Affairs & Rehabilitation) part. We’re doing all that in one event.”

Including the community’s youth in its programs is nothing new to Legion Family 560, which has partnered for the past four years with the Greater Heights Area Chamber of Commerce to honor area graduating high school students either set to attend a service academy or entering the military. During the Education Luncheon, students are presented with certificates of appreciation by Legion Family members. Those entering the military also are given a letter that states that once they get stationed their first year’s dues in The American Legion will be covered through Texas’ Eighth District. The letter also encourages members of the servicemembers’ families to join whatever branch of the Legion Family they may be eligible for membership.

“We’re starting to have success with that,” Mondy-Boyce said. “We’re hoping to have a crop of these young people from the luncheon … join up with us. And we told them that when they get out of the military, they’ve got a home at Post 560.”

Part of the National Doughnut Day event will be streamed through Auxiliary Unit 560’s Facebook page. Tune in beginning at 10 a.m. CT.