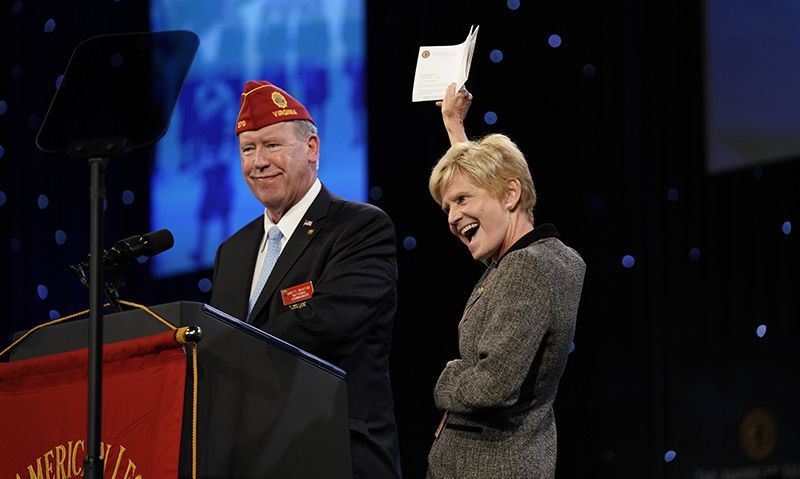 The only major national memorial honoring all women veterans, The Women In Military Service For America Memorial, has among its features the opportunity for women veterans to register as a member of the memorial.

But when Ret. Maj. Gen. Jan Edmunds, chairwoman of the memorial’s foundation, encounters a woman veteran during her travels and asks her to register, she told American Legion National Convention delegates that oftentimes the answer is the same.

“Sadly, far too many members of the general public don’t think of women when they hear the words ‘veteran’ or ‘bravery’ or 'courage,’” Edmunds said. “There are many (women veterans) … who don’t see themselves as veterans. As a result, the contribution of women who have served goes under-recognized and under-recorded, making the women who served end up feeling invisible.”

“Ultimately, if we’re successful, we’ll change the face of courage in the minds of the American public, so that when you say the word ‘veteran’ or ‘courage’ or 'service,’ people will think of a woman as well as a man. That’s our goal: to make sure that every woman veteran is included and every story of service is remembered.”

Edmunds thanked the American Legion Family for its support of the memorial, which is located at the Ceremonial Entrance to Arlington National Cemetery, and praised The American Legion for allowing women to join a year before they were allowed to vote.

“In fact, it was the women who served in uniform in World War I that were the tipping point for women finally getting to vote,” Edmunds said. “Women have never had to fight to be included in The American Legion. Obviously, kudos to The American Legion for leading history, but we cannot rest on these laurels. Until the word veteran automatically means men and women, we have work to do.”

Edmunds took advantage of her time to ask the woman veterans in the audience to register with the memorial. “If you’re not yet included, I hope you’ll take your rightful place in history,” she said. “I ask everyone here, if you know of a woman veteran – be they your mother, wife, daughter, sister, aunt, a neighbor – make sure they’re included. Make sure they’re part of our history … so that we can make sure that history always remember their name.”