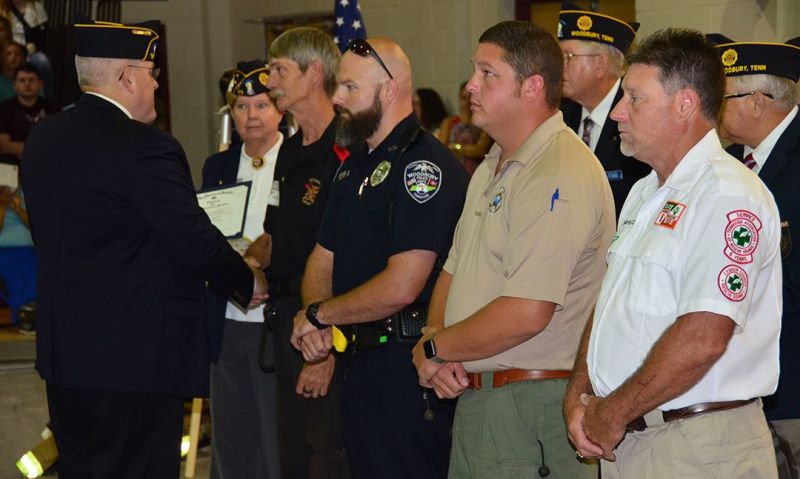 With the terrorist attacks of Sept. 11, 2001, now 18 years in the past, there are now seniors in high school who may not have been born when the attacks occurred.

That’s why many American Legion posts across the nation feel it’s their role to remind those youth what transpired on that day. On such post is Hilton Stone American Post 279 in Woodbury, Tenn., which on Sept. 11 conducted its ninth National Patriot Day Ceremony.

A full gymnasium of Cannon County High School students, first responders, military personnel and community members joined Post 279 Legionnaires, state and district Legion leaders and American Legion National Commander Bill Oxford. The national commander was invited by Post 279 to attend the ceremony while on his official visit to the Department of Tennessee; near the close of the ceremony he was presented a $425 donation by the post to the Legion’s National Emergency Fund.

“Today, we’re in a school, and that’s part of who we are and what we do,” Oxford said. “We are about training, teaching and educating our young people, and providing the developmental process for them to make sure we don’t forget 9/11.

Looking around as the bleachers in the gym began to fill with students, Post 279 Adjutant Michael Parks explained that “9/11 was 18 years ago. Most of these kids weren’t born, so they need to know. Whoever said it – ‘if you don’t know history you’re going to repeat it.' They need to know the sacrifices the (first responders) and military have made all along, and especially since 9/11.”

Welcoming attendees to start the ceremony, Post 279 Third Vice Commander Christine Barrett called the ceremony “a solemn reminder of the continued sacrifices of our first responders and military that are deserving of our utmost honor and respect.”

In his law enforcement prayer, Rev. Tony Burnett – statewide coordinator of the Drug Recognition Expert School and Advanced Roadside Impaired Driving Enforcement within the Tennessee Highway Safety Office – said first responders “so many times go to places that we fear, places where we are that we don’t know what to do. I pray today and throughout every day that they would feel the commitment and appreciation of their community.”

Cannon County Rescue Squad Chief Operating Officer Tim Bell, a former state paramedic of the year, was the guest speaker and reminded the audience that among those U.S. citizens killed when planes hit the World Trade Center and Pentagon, and when a fourth plane crashed in Pennsylvania, were 412 first responders.

“This day is a day that we should never forget. We don’t want to forget,” Bell said. “We want to honor those (killed).”

Post 279 Commander David Faulkner said that the events of 9/11 deserve the same recognition and reflection as another event that took place nearly 78 years ago.

“It’s important for our nation to take the time to remember those events in our history that have shaped this nation,” Faulkner said. “Two of those events that have happened in the last 100 years … are the attack on Pearl Harbor by the Imperial Forces of Japan on the seventh of December, 1941. The next major attack was on Sept. 11, 2001 by a group of terrorists.”

Among the students in attendance were 2019 Tennessee Boys State attendees Lucas Clark, Austin Powell and Collin Reed, who recited the Pledge of Allegiance. Cannon County Fire Department Chief Michael Underhill struck a bell honoring fallen first responders, while a member of each area first-responder agency was honored as an Outstanding First Responder by Post 279.

Near the close of the ceremony, retired U.S. Army Sgt. Franz Walkup placed a wreath in front of the podium.

"Today is about remembering, honoring and never forgetting those who died on 9/11,” Oxford said, “those who died (during the attacks), but also the first responders who actually participated in the rescues.”