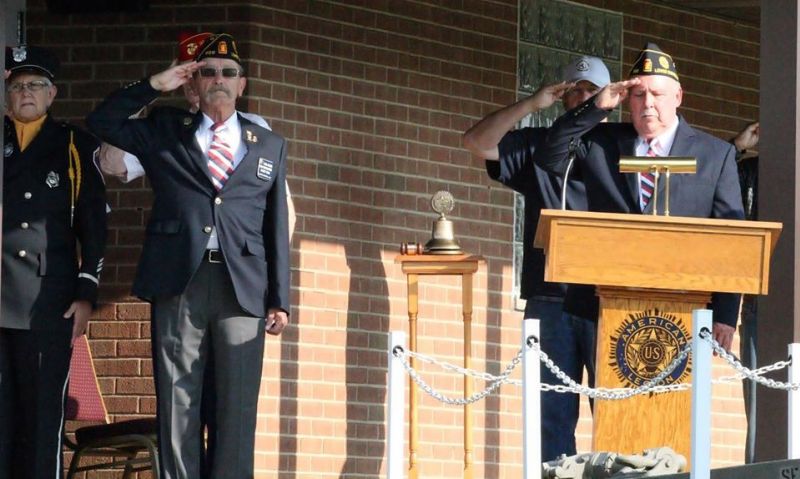 As many Americans spent Sept. 11 remembering the 9/11 terrorist attacks against the United States carried out 18 years ago, American Legion posts and Legion Family members across the country helped commemorate Patriot Day in their communities.

The following are a sampling of how Legion posts spent Wednesday honoring those killed during the attacks, gathered from various media outlets.

Sons of the American Legion Squadron 291 in in Newport Beach held a Patriot Day event that included remarks from Newport Beach Mayor Diane Dixon and first responders, as well as food, vendors and music at Veterans Memorial Park, which adjoins Post 291.

Dozens of veterans, Palm Bay firefighters and police gathered at Charles F. Thomas IV Post 117 in Palm Bay for a poignant tribute to those who died on Sept. 11, along with those Brevard County first responders who died in the line of duty. A ceremonial bell tolled during the ceremony.

• American Legion Post 332 in Rockton hosted a “9/11: Never Forget Tribute,” where local lawmakers and first responders reflected on the impact of the 18th anniversary. It was the third year for the tribute.

• In Bloomington, American Legion Posts 56 and 635 gathered to honor and remember those lost on 9/11. “I think it refreshes in everyone’s mind, even the people who remember it," Post 635 Honor Guard Commander Jerry Monical told CI.com. “It refreshes in their mind and lets the younger people know also what happened that day.” The ceremony concluded with trumpet Taps and a ceremonial flag-folding to honor the military and first responders. https://www.centralillinoisproud.com/news/local-news/american-legion-pos...

• In Elgin, American Legion Post 57 and the city teamed up for a ceremony at the city’s Civic Center Plaza. The morning included the posting of the colors, remarks from speakers, ringing of the fire bell, a gun salute and the playing of taps. “As I think of Sept. 11 this 18th year, one thing comes to mind and the thing that perhaps we should learn: the day after Sept. 11 there were no hyphenated Americans. We were only Americans," Post 57 Legionnaire Tricia Dieringer told the Elgin Courier News. "And regardless of what happens in your life, in your community or in your nation, we are strongest when we are together. We are strongest when we can forgive, show compassion and we know what’s truly important in our lives. And most of all we’re strongest when we’re on our knees looking up.”

In Topeka, members of American Legion Post 421 gathered at the Fairlawn Road overpass over I-70 West to wave flags for passing motorists.

In Bozeman, law enforcement officers, firefighters, veterans and others gathered at American Legion 14 to honor the first responders who went into burning buildings on Sept. 11, 2001, as well as those who continue to risk their lives.

“We have to memorialize those who passed away and gave their life for this country,” Post 14 member Randy Kemp told the Bozeman Daily Chronicle. “It was 18 years ago; some people in this room may not have been born.”

In Laughlin, Richard Springston American Legion Post 60 honored first responders. Members of the Las Vegas Metropolitan Police Department’s Laughlin Substation, representatives of the Nevada Department of Public Safety’s Highway Patrol Division and personnel from the Laughlin stations of the Clark County Fire Department were on hand to receive a lunch and thanks from members of the post for their bravery and sacrifice on a daily basis while serving the residents and guests of Laughlin.

• At a Wednesday evening dedication ceremony for the new 9/11 memorial at Veterans Park in Salem, Gov. Chris Sununu said the granite monument honors the nation’s firefighters, policemen, and men and women in uniform who fought and continue to fight wars that were the consequence of the attacks on Sept. 11, 2001. The Salem N.H. Won’t Forget Committee, which is under the umbrella of American Legion Post 63, put the memorial together.

• In Hampton, six names were added to the Global War on Terrorism Monument located outside American Legion Post 35: Master Gunnery Sgt. Dale F. Racicot, 54, of Weare; Spc. Matthew R. Woods, 22, of Lyman; Spc. Jonathan M. Mickle, 27, of Rye; Spc. Ryan J. McDermot, 26, of Hampton; Sgt. Ryan P. Goggin, 30, of Wolfeboro; and Cpl. Jonathan W. Currier, 21, of Hampton. The monument bears the names of all servicemembers from New Hampshire who lost their lives in the Global War on Terrorism since Sept. 11, 2001. “We try to make the monument more inclusive than most,” Post 35 Commander Berkley Bennett told Seacoastonline.com. “We do it for the families of the fallen, so that they don’t feel that their loved one is forgotten.”

In Conway, a ceremony was attended by about 80 people in North Conway’s Schouler Park. The event was chaired by State Rep. Steve Woodcock, a member of American Legion Post 95 of North Conway. “We are here to honor, remember and pray for the over 3,000 lives that were lost on that tragic day,” Woodcock told the Conway Daily Sun. “And beyond that, we cannot and should not forget the families and friends that are still impacted each day by these losses.” The ceremony included a “Heroes’ Flag of Honor” that included the names of the 3,000 people who died on 9/11 after terrorists hijacked commercial airliners and flew them into the World Trade Center and the Pentagon in New York. Another hijacked jetliner was flown into a field in Pennsylvania.

• In Batavia, Glenn S. Loomis American Legion Post 332 conducted its first ceremony to mark the anniversary of the terrorist attacks. The ceremony included the tolling of a bell at the exact times planes struck the World Trade Center towers in New York City and the Pentagon, and at the time a plane crashed in a field near Shanksville, Pa., after passengers prevented terrorists from reaching the Capitol. The tolling of the bell was followed by a prayer and a period of silence, then comments and remembrances if anyone wanted to share them. Legionnaire Jim Neider said Post 332 would like to make the ceremony an annual event. “I think in this digital age, we tend to forget these personal connections like this. We think that the personal contact is essential,” he told The Daily News.

• In Olean, American Legion Post 530 hosted a ceremony that included speeches from Mayor William J. Aiello, Assemblyman Joe Giglio and Olean American Legion Commander Jim Farmer. The speeches were followed by a flag raising from Navy veteran Conrad Tincher and Army veteran William Hilliard. Then Olean Fire Chief Robert Bell and Olean Police Chief Jeff Rowley placed a wreath in memory of those lost. “Veterans already have two days of remembrance, Memorial Day and Veterans Day,” Farmer said. “This is what today is for, to remember those who ran into those burning buildings. Today is a day to say to your first responders, thank you for your service.” https://www.tapinto.net/towns/greater-olean/sections/police-and-fire/art...

A ceremony organized by American Legion Post 10 took place at the courthouse lawn in Albany, where a large crowd – including local students – came to pay tribute to the victims of Sept. 11.

• A U.S. flag was suspended 30 feet between ladder trucks from local fire departments at American Legion Post 868 in Lower Burrell for a ceremony, which included a rifle salute from Post 868’s Color Guard. Speeches were delivered by Post 868 Commander Ed Zollinger, Lower Burrell Mayor Rich Callender and state Rep. Bob Brooks, R-Murrysville. Post 868 has a 9/11 memorial with a section of a beam from one of the twin towers and has been honoring the anniversary since the first year after the attacks.

• In Mansfield, Austin-Cox Post 478 again conducted a memorial ceremony at Mansfield Veterans Park. "It's an important part of our American history, and it's a sad part," American Legion Post 478 commander Bruce Dart told WENY. "It's something that we need to remember and salute all the people who died and all the people who responded, who also subsequently died."

• In York County, American Legion Post 799 donated nearly 3,000 U.S. flags to two seniors at Central York High School, Clayton Brosend and Madeline Brodbeck, who placed the flags on their school grounds. Each flag represented a life lost during the 9/11 attacks. The flags are part of the pair’s 9/11: Never Forget Project. They are working with their classmates and teachers to make sure the next generation of students never forgets 9/11.

In downtown Conway, American Legion Post 111 and other local civic groups held American flags on the Main Street Bridge to commemorate the 18th anniversary of the 9/11 terrorist attacks.

At the Appomattox Court House, American Legion Post 104 conducted a memorial service again, having done so every year since 2002.

“At about this very moment 18 years ago, the second plane struck the south tower of the World Trade Center in New York City,” Post 104 Public Information Officers Howard Gregory said. “And all of us instantly realized that our nation was under attack and that life would never be the same for us again.”

In St. John, first responders were joined by more than 20 cadet firefighters and veterans for a solemn ceremony to memorialize the 9/11 attacks and honor those who put their lives before others in times of disaster. The events were organized by Viggo E. Sewer Post 131 and were timed to take place at the hour of the attacks on the World Trade Center in New York 18 years ago.

Post 131 Commander Harry Daniel led the audience in a rendition of the “Battle Hymn of the Republic.” After a closing prayer, the public was invited for refreshments at the post.