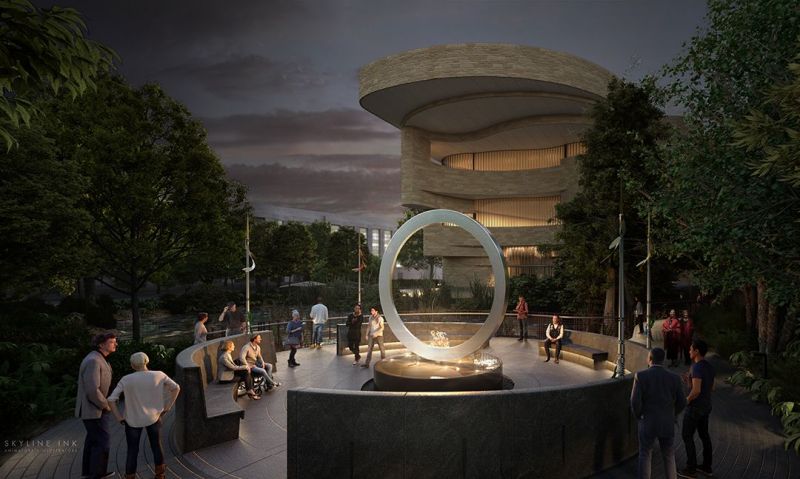 Design by Harvey Pratt/Butzer Architects and Urbanism, illustration by Skyline Ink, courtesy of the Smithsonian's National Museum of the American Indian.

The National Museum of the American Indian in Washington, D.C., will host a day of events on Sept. 21 in conjunction with groundbreaking of the National Native American Veterans Memorial.

The memorial, located on the National Mall in Washington, will consist of an elevated stainless steel circle balanced on an intricately carved stone drum. The design incorporates water for sacred ceremonies, benches for gathering and reflection, and four lances where veterans, family members, tribal leaders, and others can tie cloths for prayers and healing.

The memorial is scheduled to open in November 2020.

Saturday’s schedule of events at the National Museum of the American Indian, Fourth Street & Independence Avenue, SW, include children’s activities from 10 a.m. to 4 p.m. in the imagiNATIONS Activity Center; a hands-on replica of the memorial on display in the Potomac Atrium from 10:30 a.m.-12:30 p.m. and 1:30-4 p.m.; a live webcast of The Cheyenne and Arapaho Singers drum group at 11 a.m. and 2 p.m. in the atrium; a tour of the museum’s traveling exhibition “Patriot Nations: Native Americans in Our Nation’s Armed Forces” at noon; and the conversation between Pratt and museum director Kevin Gover, which will be webcast from the Rasmuson Theater at 2:30 p.m.

For more information and links to the webcast, click here.