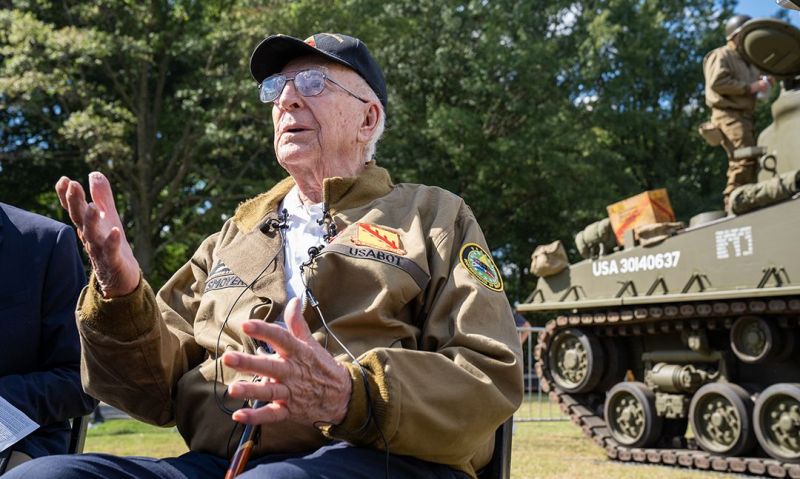 Legionnaire and World War II veteran Clarence Smoyer received the Bronze Star Award for his actions in the Battle of Cologne during a ceremony in Washington, D.C., Sept. 18, 2019. Photo by Eric Kruszewski for The American Legion

The ceremony, held at the National World War II Memorial in Washington, D.C., was a surprise for Smoyer, a 16-year member of Shoemaker-Haydt Post 314 in Lehighton, Pa. The day was arranged by Sen. Pat Toomey, R-Penn., and author Adam Makos, whose book “Spearhead” details the actions of Smoyer and his tank – named “Eagle” – during the Battle of Cologne. Makos brought Smoyer to Washington under the pretense of a book signing at the Pentagon.

"(The Bronze Star) is well overdue, and he should have received it a long time ago," said Sgt. Joe Caserta, who served with Smoyer during the war. The men remain close friends.

"I will tell you,” said Toomey, “that in my travels across Pennsylvania and across this great country and sometimes in meetings here, we hear stories of these heroes that all too often are forgotten (about) the brave men and women who’ve worn the uniform of this country. But these stories, and specifically Clarence’s ... is a reminder of why Congress and all Americans owe a huge debt of gratitude to those very men and women.”

It was March 6, 1945, when Smoyer heard the words of Lt. Bill Stillman come over the radio: “Gentlemen, I give you Cologne. Let’s knock the hell out of them.” Smoyer and the tank crew obliged.

The Eagle’s crew rode into the German city of Cologne – one of the last strongholds of the Third Reich. The city had mostly been evacuated, but Nazi forces guarded the Cologne Cathedral. A German Panther tank destroyed two American tanks and killed several of the soldiers inside. Smoyer and the Eagle’s crew moved forward, finding themselves staring down the German tank. Smoyer fired three shots in quick succession and the Panther went up in flames.

“Clarence sat back from the periscope, still stunned by the previous 40 or 50 seconds of furious action. Did that really happen?” Makos wrote in his book. “After some time, Clarence broke the silence in the tank. ‘That was close,’ he said.”

The fierce battle was caught on camera and shows the German Panther burning in the shadows of Cologne’s Cathedral. The footage earned Smoyer the sobriquet “The Hero of Cologne.”

Smoyer was supposed to be awarded the medal in 1945, but in the days that followed the battle, fighting in the city slowed. Smoyer was approached by German children who came to him asking for bubblegum. "I tried to explain to them I don't have any," Smoyer said. "I pulled my pockets out to show them they were empty. MP's pulled up beside me. You're not supposed to be talking to the Germans.” Smoyer was cited for “fraternizing with the enemy” and his award was withdrawn. Toomey and Makos helped make things right, and the Army reviewed the case to reverse the injustice.

Two words escaped Smoyer’s lips as he climbed out of his vehicle and walked toward the ceremony. “Bronze Star.” This was a day he never thought would come.

“I wear this in memory of all the young people who have lost their lives in battle,” Smoyer said.