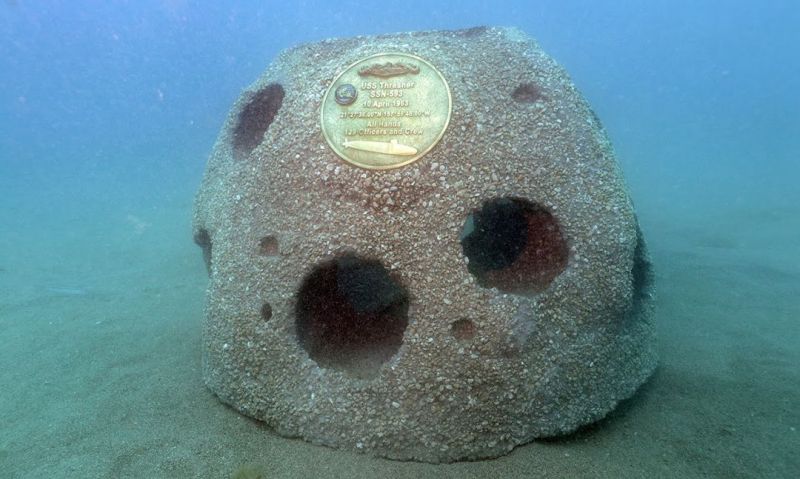 In October, the final pieces were put into place off the coast of Sarasota, Fla., of a war memorial that is the first of its kind.

“On Eternal Patrol” is a collection of 67 reef balls dropped to the bottom of the Gulf of Mexico. A reef ball is an artificial reef designed to serve the same functions as a natural one – especially that of hosting marine life. Each of the balls, 3 feet tall and weighing 1,300 pounds, includes a plaque dedicated to one of the 65 U.S. submarines lost since 1900, as well as its contingent of the more than 4,000 personnel lost in that time period. There is also a ball for United States Submarine Veterans, Inc. (USSVI), and the pinnacle reef dedicated to the submarine community as a whole, including those lost in non-sinking incidents.

The “On Eternal Patrol” project was developed by Eternal Reefs – a Florida nonprofit specializing in combining cremains with a proprietary concrete mixture used to create artificial reefs – along with other reef organizations. The first dedication of the project was Memorial Day weekend of 2018, but circumstances prevented the beginning of deploying the balls until Memorial Day weekend of 2019; Coast Guard buoy tenders helped with the deployments. Playing an important role in both ceremonies was Dave Taylor, a member of Glen Peters Post 266 in Sarasota. He served as master of ceremonies for the 2018 ceremony, and took photographs aboard the tender during the 2019 ceremony.

Taylor has never been on a submarine (he served in the Army), but when recommended as emcee by a fellow member of the Sarasota County Veterans Commission, “I didn’t hesitate at all – I felt that it was in the best interest of my fellow veterans, regardless of service, to serve as a spokesman for the memorial.” Taylor has been a photographer since his teens, and spent 32 years doing it for the U.S. Postal Service. He is currently pursuing a degree in film and photography, but despite his busy schedule also uses his talents for parades and other veterans events.

Taylor sees the “On Eternal Patrol” collection as “a wonderful solution to a long-overdue problem for families that have loved ones buried at sea. In the past it has been the dumping of ashes in the sea and then ashes float in all directions, giving the loved ones no one spot to come to remember their loved one.” Reef balls are “just like a headstone, but underwater.” He is unsure of his final resting place, and isn’t really thinking about it: “I am too busy honoring those who now have found eternal peace.”

Learn more about the “On Eternal Patrol” project, and the lost submarines and personnel, at www.oneternalpatrol.com.