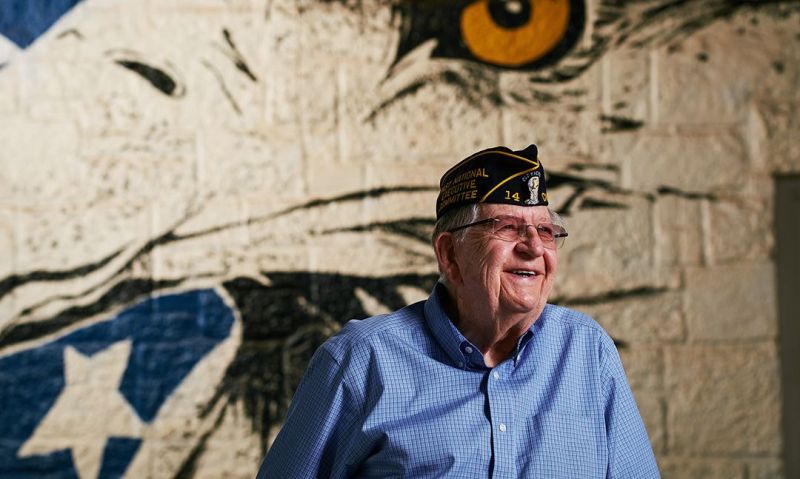 On Nov. 13, one of Tennessee's most esteemed veterans received yet another honor, when the National Guard armory in Chattanooga was redesignated with his name.

Retired Brig. Gen. Carl Levi, a 65-year member of The American Legion and former city treasurer, says he was surprised last spring when he heard the Tennessee General Assembly passed a bill that would add his name to the historic facility at 1801 S. Holtsclaw Ave. Built by the Works Progress Administration and opened in 1941, the armory continues to be used as a readiness center and recruiting station.

"I am humbled," said Levi, 89. "I think of the thousands of people who have gone through that armory and that I'm the lucky one who got his name on the building."

"General Levi is an outstanding Tennessean and exemplary public servant," Lee said. "We are grateful for his years of service to our country and are pleased to honor his legacy through the BG Carl E. Levi and CSM Bobby G. Davis National Guard Armory."

Levi enlisted in the Army as a private in 1952, attending basic and advanced training at Fort Sill, Okla. Three years later, he was commissioned as a second lieutenant in the Tennessee Army National Guard, going on to hold command and staff positions at the battery, battalion and brigade levels. He served as inspector general and S-1 adjutant at the Guard's state headquarters in Nashville and as comptroller for all Tennessee National Guard units.

Levi also served as commander of the 196th Field Artillery Brigade from 1982 until his retirement in 1987. During those years, he did a lot to improve the Chattanooga armory: improved parking, roof repairs and extensive remodeling of the drill hall, including a concrete floor, new windows and doors, a latrine for women, and a heating system. Later, the drill hall was named for Levi, whose career in the Tennessee National Guard spanned three decades.

"I had no idea I'd stay in as long as I did and do as good as I did," Levi said. "God has a way for doing things for you, and I can't take all the credit. My success in the National Guard was all the people surrounding me. We were just a good team. There are so many who ought to share in this honor."

"Carl’s done a lot for that armory over the years, using his influence in town to get a lot of things done for free that normally would have cost the National Guard money, little things fixed here and there," Gardenhire said. "It’s been his life. I thought, 'Let’s do something to honor him.' He's a great guy, and every veteran I know looks up to him."

State Rep. Patsy Hazlewood called it an honor to sponsor the bill on the House side.

“Not only has the general had an exemplary military career, but he has also contributed to the broader Chattanooga community in a myriad of other ways," she said. "Having his name on the armory is a fitting way to recognize his lifetime of service.”

A graduate of the University of Chattanooga, Levi served as the city's treasurer for 24 years, retiring in 2001. He also served two terms as Hamilton County trustee. Some of his honors include the 1988 Treasurer of the Year award from the International Municipal Treasurers Association of the United States and Canada, the 1995 Chattanooga Veteran of the Year and the 2008 Tennessee County Trustee of the Year.

Levi is deeply involved in several civic, military and veterans organizations, including The American Legion. He was commander of American Legion Post 14 in Chattanooga for 25 years, and was recognized as 1968 Legionnaire of the Year. He is a past commander of the American Legion Department of Tennessee and currently serves as vice chairman of the Legion's National Finance Commission.

As a member of Post 14, Levi was a close friend of Medal of Honor recipients Charles Coolidge and Desmond Doss. He delivered the eulogy at Doss' funeral in 2006.

In a 2018 video interview, Levi said, "I've been a very fortunate person. I served my country, I enjoyed it, and I've enjoyed The American Legion. It's been a wonderful thing for me."