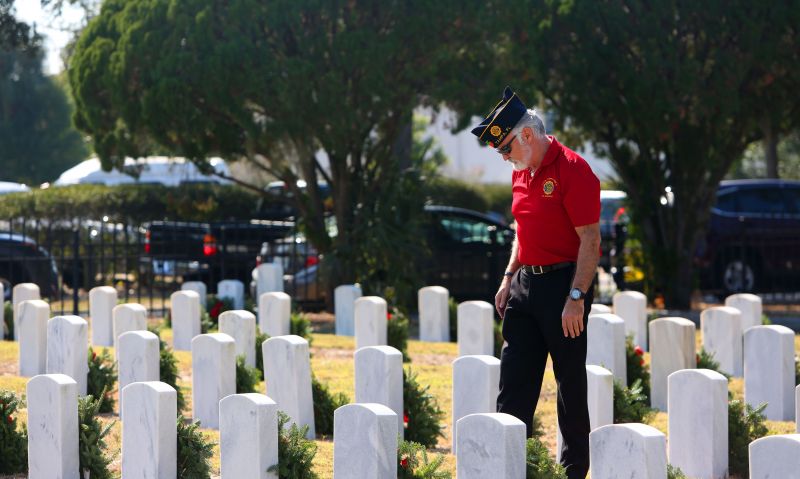 A three-decade tradition will continue this weekend when Americans coast to coast will gather to “remember our fallen U.S. veterans, honor those who serve, and teach children the value of freedom" through the placing of wreaths on veterans’ graves.

American Legion Family members again are going to be leading events across the country, including those in Wisconsin who have placed tens of thousands of wreaths over the years. A year ago, members of the Department of Wisconsin Legion Family were able to raise the funds to place 7,274 wreaths at the Wisconsin Veterans Memorial Cemetery in King – one for every gravesite.

The effort, spearheaded by the Wisconsin District 8 American Legion Riders, again will result in a wreath being placed on all 7,400 gravesites at King Cemetery on Dec. 14. Evelyn McSherry – who has led the effort with her husband Ray – said this year’s effort came “down to the wire.”

A Legion Rider and member of Auxiliary Unit 153, Evelyn has been involved with Wreaths Across America for nearly a decade. She said she and Ray, a past two-term state ALR director and a member of Palmer-Ritchie-Thomas Post 153 in Pittsville, are looking for someone to mentor to eventually take over the program, but “will not do that until we are sure it will continue.”

Further east, Robert I. Nickerson Post 382 in Squantum, Mass., will be placing more than 7,400 wreaths at several cemeteries in the area, including more than 3,300 at Mount Wollaston Cemetery in Quincy. Ceremonies will take place at both Mount Wollaston and Pine Hill Cemetery; prior to that, wreaths will be placed at five smaller cemeteries in the area. Some of the veterans graves date back to the Revolutionary War, including Presidents John Adams and John Quincy Adams.

And in Elmira, N.Y., Post 443 members work with other local nonprofits and businesses to place wreaths at more than 6,000 veterans graves at Woodlawn National Cemetery. In August, the post held a motorcycle rally to raise funds for the wreaths.

To find a Wreaths Across America event in your area, click here. For all social media postings, use the hashtag #WAA2019.

• In Hot Springs, Warren Townsend American Legion Post 13 is placing approximately 300 wreaths at Memorial Gardens Cemetery. A ceremony that includes a bugler and the service song of each branch of the military will take place prior to the placing of the wreaths. The post collected many donations for the wreaths in September at the Hot Springs Farmers & Artisans Market as part of a celebration of the Post's 100 year anniversary this year.

• In Cabot, members of Criswell Robinson Post 71 get together to purchase wreaths for veterans who were members of the post and are buried at private cemeteries in the Central Arkansas area. Other members of the post lay wreaths at the Little Rock National Cemetery. “It’s a true honor to participate,” said Post 71 Public Relations Officer Susie Goebel.

• At Memorial Gardens Cemetery in Colorado Springs, American Legion Neal Thomas Jr. Post 209’s honor guard will be posting the colors for the Wreaths Across America ceremony. After the ceremony, the public will help lay wreaths on the approximately 2,000 veterans graves at Memorial Gardens.

• In Eaton, Norman Hutchinson American Legion Post 26 is sponsoring wreaths being placed on the 395 veterans gravesites at Eaton Cemetery, including that of Civil War Medal of Honor recipient George G. Moore. The post also has 50 specific grave requests from individuals who wish to place a wreath on the grave of a family member or friend. Post 26 Adjutant Bill Martin said the post conducted multiple fundraisers for the project, including through local schools. “(It’s) a great way to remember, honor (and) teach about our locally interred veterans,” Martin said.

• In Elwood, American Legion Post 1977 will continue a tradition of placing wreaths at Abraham Lincoln National Cemetery and also helps with a ceremony at the Middle East Conflicts Memorial Wall in Marseilles.

For the second year in a row, Chapman-St. Onge-Dankowski American Legion Post 299 in Mackinac Island is leading an effort to place 225 wreaths on veterans graves at two cemeteries.

Sons of The American Legion Squadron 434 is participating in a wreath-laying ceremony at Springfield National Cemetery. Members of the post's Legion Family donated several wreaths.

The Legion Family from Post 65 in Statesville will participate in a Wreaths Across America ceremony at Salisbury National Cemetery.

In Girard, American Legion Post 235 and Blackstone Funeral Home are teaming up to place more than 250 wreaths at Girard City Cemetery.

More than 160 wreaths will be placed at the Greenwood Cemetery, thanks to the efforts of Stevens-Chute Auxiliary Unit 4.

At Inman Cemetery, American Legion Post 45 has led the effort to place more than 240 wreaths.

• In Katy, Jonathan D. Rozier American Legion Post 164 led the effort for the third annual local Wreaths Across America event. The post helped raised enough to place wreaths on approximately 445 veterans graves at Magnolia Cemetery. A ceremony involving community leaders, veterans and their families will take place prior to the placing of the wreaths.

• In Lufkin, American Legion Auxiliary Unit 113 led a sponsorship effort that will bring 500 wreaths to be place at the Garden of Memories Cemetery.

American Legion Post 10 in Manassas in placing wreaths on veterans graves at the Manassas Cemetery. More than 200 wreaths will be placed, including one on the grave of Civil War Medal of Honor recipient Solomon Joseph Hottenstein.