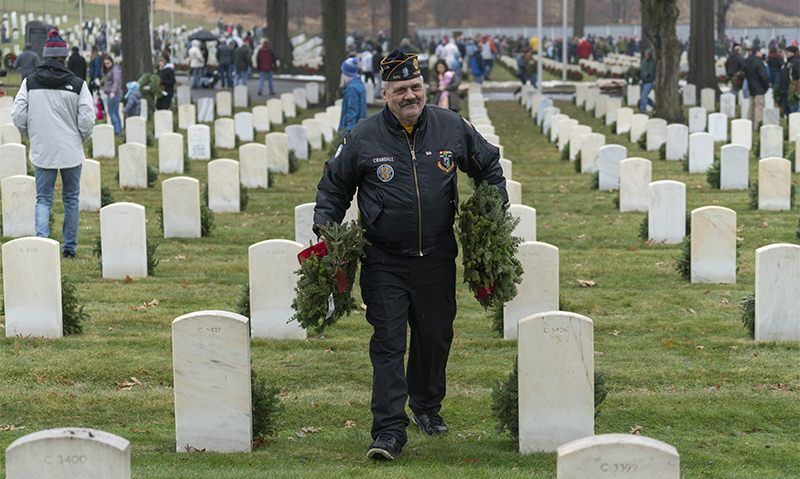 Bob Crandall of Post 442 places wreaths on veterans graves at Woodlawn National Cemetery in Elmira, N.Y., for Wreaths Across America on Dec. 14, 2019. Photo by Zachary Krahmer

Vietnam veteran Chuck Muller makes a special pilgrimage to place a wreath at the gravesite of his high school friends, including Keenan Newell, each year as part of Wreaths Across America.

“I come here out of respect for my friends and their fathers,” said Muller, commander of Bentley-Trumble Post 442 in Horseheads, N.Y. “Keenan was the most unassuming guy you would ever know. He wound up as an Army Green Beret, special forces.”

Muller recalled growing up in the small community with Newell, who died of causes related to Agent Orange in 2001. “I remember going over to his house when we were kids, playing games down in the basement. It’s all good memories.”

American Legion members, including Muller, were among hundreds of volunteers who placed 6,666 wreaths in less than an hour at veterans’ graves Dec. 14 at Woodlawn National Cemetery in Elmira, N.Y. American Legion Riders formed a flag line as part of the 30-minute ceremony that kicked off the event.

A couple of months ago Jerry Lenox Jr., commander of Bentley Post 443 in Elmira, was hoping there would be 5,000 wreaths to honor the 8,200 veterans laid to rest at the cemetery. But the community rallied to exceed his expectations.

“It’s getting better and better every year,” said Lenox, a retired Army veteran. “More people are getting involved. Being in the military, I missed a lot of Christmases. These guys in here deserve this. The community has the holiday spirit and want to show their support for veterans.”

The cemetery holds the remains of veterans as recent as the wars in Iraq and Afghanistan, and dating back to the Civil War.

In fact, the sprawling, 10.5-acre cemetery is notable for having the remains of Confederate POW soldiers and German POWs from World War II. John W. Jones, an escaped slave and cemetery caretaker, took meticulous notes of the 2,973 Confederates he buried. His work ensured that 40 years later, each soldier’s grave marker would be correctly marked.

In the civilian section, notable graves include those of author Mark Twain and Ernie Davis, the first African American to win the Heisman Trophy.

Lewis Hill, an event co-chairman for the past two years, has been active since WAA started five years ago in Elmira. Hill, who served 22 years in the Army and reserves, thanked the Legion, other community groups, and Cameron Manufacturing & Design and other local businesses for their support.

“I think it’s fabulous that the Legion and other veterans groups support this,” said Lewis, an American Legion member. “Without them we wouldn’t be here. They are not only here representing our veterans but they are responsible for at least 80 or 90 percent of our fundraising. They support us all year long.”

Still, there were hundreds of civilians participating on a cold, rainy day in the rural community just north of the Pennsylvania border.

“It’s really amazing how this community has been involved with this project since the start,” Hill said. “It blows my mind. It just continues to grow and grow.”

The first year 500 wreaths were laid. While the number has grown more than tenfold, Hill aims to keep improving.

“Next year, we’re going to fill it with wreaths.”