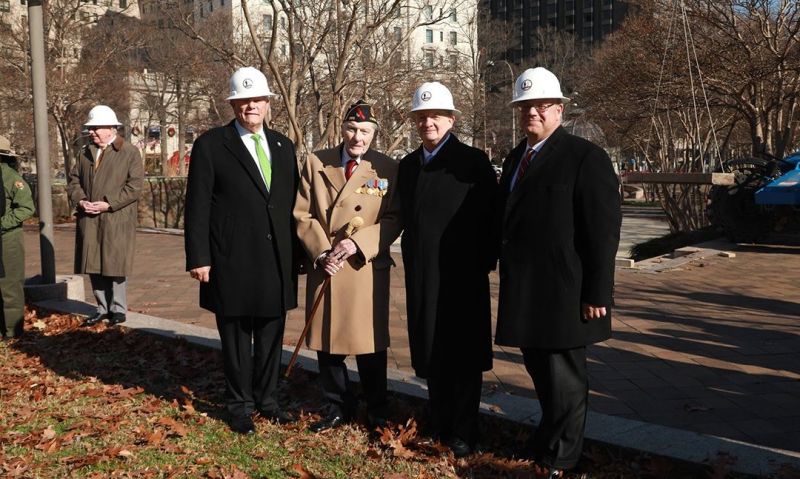 On Dec. 12, key leaders gathered on the site of the new National World War I Memorial in Washington, D.C., to mark the start of construction, after the U.S. World War I Centennial Commission received a building permit from the National Park Service (NPS).

The first phase of construction will be a 360-day project to rebuild the former Pershing Park, and prepare the site for the eventual installation of the memorial bronze sculpture when it is completed. The building permit was awarded after the memorial design was approved by the Commission of Fine Arts and the National Capital Planning Commission earlier in 2019. The memorial is being built under the commission's authority by the Doughboy Foundation.

Hamby was very pleased with the receipt of the building permit and start of construction. "Finally, the 4.7 million Americans who left their homes to deploy to a country most had never visited, fight in a war they did not start, and were willing to die for peace and liberty for people they did not know, will be honored at this magnificent spot in our nation's capital," he said.

"The new, national World War I Memorial will join the other war memorials in Washington, D.C., each serving as a fitting tribute to the sacrifices that American men and women made to defend freedom throughout the world," Bernhardt added.

The memorial design of architect Joseph Weishaar, featuring a monumental bronze by sculptor Sabin Howard, was selected as the winner from among five finalists after an international design competition in 2015 which received over 350 entries from around the world. "It's wonderful to see construction beginning at last," Weishaar said. "It's been a tireless effort by the design team and the commission to see this project through, and I'm proud of all we've been able to accomplish. This memorial is a century overdue, but here we are, and we're doing it."

The two were profiled in The American Legion Magazine in 2016.

The bronze, entitled "A Soldier's Journey," is being sculpted in clay by Howard and his team at his Englewood, N.J., studio, and will be cast in bronze at the Pangolin Editions sculpture foundry in the United Kingdom before being installed at the memorial site, along with the existing sculpture of John J. Pershing, General of the Armies of the United States, who commanded the American Expeditionary Forces in World War I. As well as the sculptural and landscape works in the park, the memorial will feature extended reality elements to enhance and extend the visitor experience. A detailed document of the approved National World War I Memorial design is available to the public; it can be downloaded as a PDF at ww1cc.org/memorial-design.

The commission’s VSO/Military Affairs Director David Hamon added that the groundbreaking marks a "great opportunity for American Legion posts to be a part of this historical moment … by making a donation to the memorial in the name of your post, you can forever be part of this great legacy by becoming an AEF Memorial Corps post.” About 22 posts nationwide have joined in 2019. For more information contact Hamon at (540) 379-8584 or david.hamon@worldwar1centennial.org.