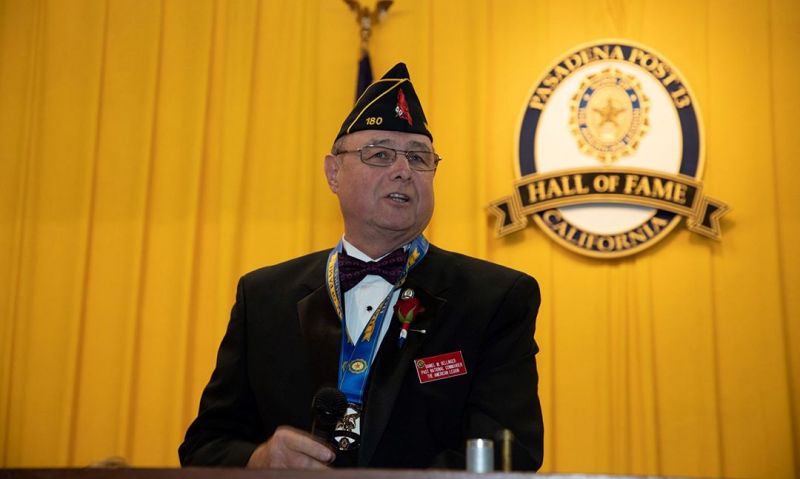 American Legion Past National Commander Daniel Dellinger of Virginia was asked why he continues to do so much for the nation’s largest veterans service organization. He replied, “Because of love. Because of love for this country, and because of love for those who raise their hand, take that oath, put that uniform on, and defend our country every day.”

Dellinger was inducted into the Sons of The American Legion Hall of Fame at Post 13 in Pasadena, Calif., during a gala early last November. Other inductees included 74-year American Legion member Anna Brown and Past Department of California American Legion Auxiliary president Linda Workman. The three names are now enshrined on the first floor of Post 13 alongside others such as American Legion Past National Commander Jake Comer.

The Sons Hall of Fame started in 2013 with seven initial inductees as an event to celebrate individual contributions to the American Legion Family, and to add new energy to Post 13, according to Mike Seaton, first national commander for the Sons of The American Legion in 1968.

The Hall of Fame is an extension, and a separate and independent program, of the Sons of The American Legion Pasadena Squadron 13. The nominating committee includes Squadron 13 Commander George Curtis, 1992 National Commander Eugene L. Sacco and Seaton. They select American Legion Family leaders nationwide on their contributions to the organization.

Seaton said those selected are "leaders in their community, are making a contribution to veterans and basically people that deserve to be told thank you and give them some recognition for it.”

This year’s honorees have distinguished themselves at the community, state and national level.

During his time as national commander in 2014, Dellinger called for the resignation of then VA Secretary Eric Shinseki as well as Under Secretary for Healthcare Robert Petzel and Under Secretary of Benefits Allison Hickey following a CNN report that the Phoenix VA Medical Center had been keeping a secret waiting list that included veterans waiting more than 200 days for an appointment, which may have resulted in the deaths of 40 veterans.

“He would get up in the middle of the night to answer emails to folks in the media, do a phone interview with a TV journalist, work with staff, anything he needed to do to be sure that another veteran didn’t die due to wait time or the lack of care,” said Nancy Brown-Park, who served alongside Dellinger as National Auxiliary president, during her introduction of Dellinger at the gala.

Dellinger, a life member of Dyer-Gunnell Post 180 in Vienna, Va., serves as the post’s judge advocate and mentors post-9/11 veterans in The American Legion. He helped build The American Legion float for the Vienna Halloween parade, complete with an Eiffel Tower to represent the organization’s birthplace and celebrate the Legion‘s 100th anniversary; he helps cook breakfast for Unit 180’s monthly fundraiser; and he and his wife Margaret worked alongside American Legion Family volunteers for the centennial float represented at the Jan. 1, 2019, Tournament of Roses Parade.

“He is still very active in the American Legion Family, whether wearing a red cap or a blue cap,” said Brown-Park, who also is a Sons Hall of Fame honoree. “What I admire about him is that he’s as involved today with his post and department as he was before he was national commander. He is dedicated to the entire Legion Family. When I served as national president, he always made sure that the SAL and I were included. He asked my opinion, we had great conversations about growing the American Legion Family, and that continues today.”

Dellinger said induction into the Hall of Fame is something he never dreamed of. “I just do things, and good things happen,” he said. “But I do appreciate everything that’s being bestowed upon me this evening.”

He said none of what he has been able to do in the American Legion Family would be possible without support from his family and wife, Margaret. “Some say I’m the Energizer Bunny, but they’ve never seen her work. I really want to thank her for putting up with me and supporting me in my endeavors. She is a saint.”

Dellinger got his start in The American Legion when a foreman who was working construction with him came up and asked if he could borrow a wheelbarrow for the weekend and added, “I need you to deliver it to the American Legion post,” Dellinger said. “So I drop that off, have two libations and a World War II vet says, ‘Do you have $15 on you?’

When Dellinger handed the money over, the World War II veteran said, “’Congratulations you’re the newest member of The American Legion.’ It only took me about two months to be elected adjutant of the post, and the rest is history. Those World War II and Korea veterans who were past post commanders took me under their wing and taught me about The American Legion. They taught me about the principles we were based upon.”

Dellinger spoke of those mentors and what they instilled in him – “hard work, pride, loyalty, honor your commitment, do what’s right, follow through, help others when possible.”

For his ending remarks, Dellinger recognized the foundation of American Legion Family history as a path to the future.

“The American Legion and the American Legion Auxiliary, and the Sons have been, or are, celebrating 100 years of service,” he said. “If we’re going to continue to be successful and take care of our veterans and servicemembers, our communities and our nation ... all three entities need to work together, and that’s what you’re doing here in California, and it’s what we’re doing across the country. I commend you for what you’re doing, but if we’re going to continue to be relevant, we need to keep up the fight. And the only way we keep up the fight is if we all work together.

Introductions for the other two honorees shared that Workman is an inspiration to the American Legion Auxiliary Department of California. An Auxiliary member since birth, she has been elected or appointed to more than 25 department and national offices, and has held several positions on committees and commissions. She is currently serving as the Auxiliary Department of California's National Executive Committee member, and is a recently retired banking and mortgage professional who now spends much of her spare time revitalizing Auxiliary units within her district.

Brown is a U.S. Marine Corps World War II veteran and past commander of Santa Monica Women’s Post 704 and Bay Cities Post 123. She has served as the historian and vice commander for the Department of California, and recently completed a 20-year stint as president of the Women's Marine Corps Association of Southern California.

Save
Tags:Honor & Remembrance, Sons of the Legion