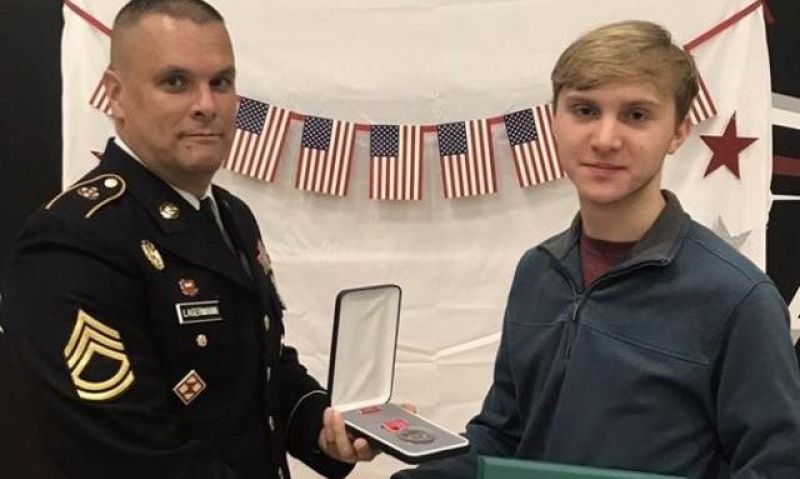 Last spring, Edward Ucinski III conducted a military records check on his late grandfather, Edward Uciski Sr. who was a prisoner of war in World War II and a longstanding member of The American Legion. It was Edward’s way of passing on his grandfather’s legacy of service to his own son, Edward Ucinski IV, so it wouldn’t be forgotten.

“When I received the (military records) letter in August 2019, I was in disbelief,” said Edward III, Department of Missouri’s 10th District commander and a member of Post 400 in Fenton. Edward Sr. was eligible for an award that neither he, nor his family, knew about.

The letter referenced that besides the Prisoner of War Medal, his grandfather was awarded the Bronze Star following the end of World War II, thanks to the efforts of Gen. George C. Marshall. Edward explained that Marshall made it possible, retroactively, for any soldier who earned a Combat Infantry Badge or a Combat Medic Badge to be awarded the Bronze Star without citation. “It was something truly incredible that many do not know about,” he said.

However, the Bronze Star was never presented to Edward Sr. following the end of the war. It wasn’t until Veterans Day 2019, 22 years after his passing, that the long overdue recognition was presented. And the great-grandson of Edward Sr. accepted it on his behalf.

During the Rockwood Summit High School Veterans Day ceremony Nov. 11, 2019, Army Sgt. 1st Class Lagermann presented the Bronze Star to Edward IV. He is a Sons of The American Legion Squadron 400 member and the Department of Missouri’s Eagle Scout of the Year for 2019.

“As for my family, we thought that receiving this Bronze Star was something noble and honorable,” Edward III said. “It is something that honors my grandfather and his sacrifices. I always said that my grandfather deserved something for what he endured.”

Edward Sr. shared his war story in 1990 with Edward III for a high school project.

Born in St. Louis in 1914 to parents who emigrated from Europe, Edward Sr. was a first-generation American. After being drafted in 1943, he served with the U.S. Army 9th Infantry Division, Company K, 39th Infantry Regiment as a BAR gunner and deployed for war, leaving behind a pregnant wife and a 1-year-old son, Edward Jr., who would go on to serve in the Army 6th Infantry during the Vietnam War.

After landing on Omaha Beach in Normandy following the historic invasion, Edward Sr. fought in the Battle of the Bulge and was captured. He was transported by train to the POW camp Stalag VII-A in Moosburg, Germany, where he was used as a laborer in areas damaged by airstrikes.

Edward Sr. was liberated on Easter Sunday in 1945, and joined The American Legion a few years later, eventually resulting in three generations of Legionnaires.

“My grandfather believed in the mission of The American Legion and was a firm believer that everyone who served, even if it was stateside, contributes to the overall success of the mission,” Edward III said.

American Legion Post 302 closed sometime after the passing of Edward Sr. in 1998. But Edward III is in the process of chartering a new Post 302, to be named after his grandfather. The post will serve as a place for all to remember Edward Sr.’s sacrifice and service through the keepsakes that Edward III holds, such as the Bronze Star medal, his World War II uniform and American Legion membership cards.

“My grandfather was truly deserving of this Bronze Star,” Edward III said. “However, I do not believe that he would have cared that he earned it. But we as his family do appreciate it and will pass it on, just as we will his memory and his sacrifices for this great nation of ours.”