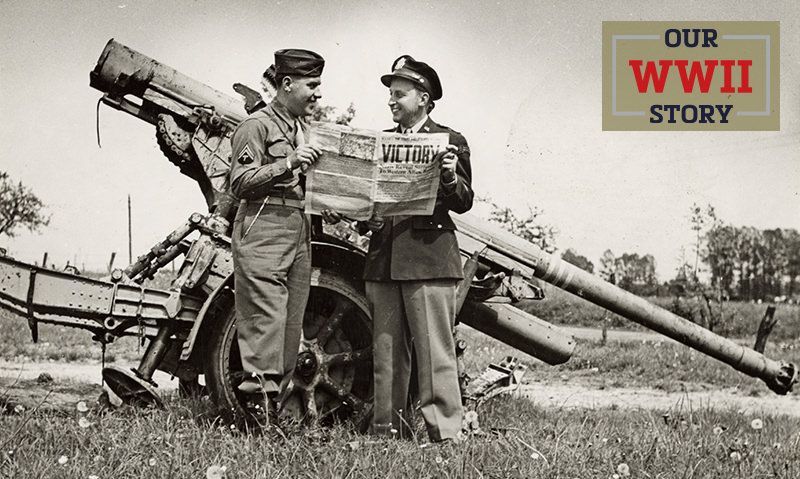 “The victory is but half won … I call upon every American to stick to his post until the last battle is won. Until that day, let no man abandon his post or slacken his efforts.”

- President Harry Truman, responding to Germany’s May 6, 1945, surrender to the Allies in World War II, announced two days later, May 8, in what would become known and celebrated as V-E Day.

American Legion National Commander Edward N. Scheiberling met in the White House with President Harry Truman just as the Allies were bringing a deadly end to Nazi Germany 75 years ago this month.

Scheiberling assured Truman – who had not yet been in the Oval Office a month following the death of President Franklin D. Roosevelt – that the largest organization of U.S. veterans would stand by him “in the tremendous task he had assumed,” reported the May 1945 National Legionnaire newspaper.

Still a summer away from complete Allied victory, the national buzzword was already “postwar.” Scheiberling’s meeting with Truman advanced the organization’s top national postwar priorities: health care, readjustment training and jobs for newly discharged combat veterans; revisions and red-tape reduction to the 11-month-old GI Bill; and the Legion’s standing call for universal military training to better prepare the nation to defend itself in the future.

Alongside the report of the commander’s White House visit appeared the Legion’s first response, in bold type, to V-E Day. The headline cautioned that “a fight only half won is not won at all.”

The American Legion’s statement about the end of fighting in Europe reminded members that “the war against the Japanese must be carried on until it, too, reaches a victorious conclusion.

“We must not succumb, here at home, to any temptation to ease off or slacken down. We must remember that while the fighting in Europe is over, the WAR is not over – not even for millions of men from our armed forces in Europe, who will just be transferred from one battle front to another, to add their strength to our forces already engaged in the Pacific war. They have little reason to celebrate, and we at home have even less – for the final V-Day must still be won …

“So long as any of our armed forces are engaged in battle, we must defer the fruits of victory; we must support them with our sinews, our cash, our prayers. Let the posts and the membership of The American Legion – itself born of war – show the way.”

The American Legion provides media tools; a chronology of the organization’s role before, during and after World War II; video links; graphic elements and more to help local posts honor the 75th anniversary of war’s end. Click here to download the media kit.