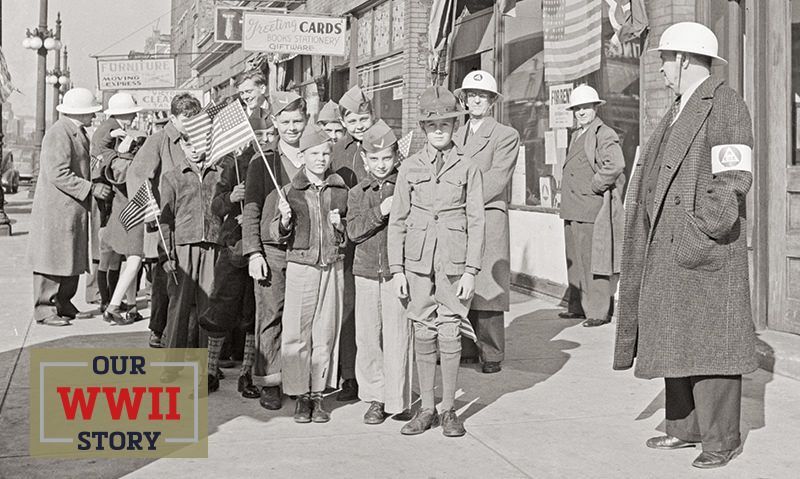 American Legion Past National Commander Raymond Murphy put out a nationwide call to display, in capital letters, a warning to “every village, town and city in the land” that citizens must be prepared in the event World War II should reach U.S. soil:

“We must learn to defend and protect ourselves, each other, and our properties, just as the men in the fighting services have had to do,” wrote Murphy, then director of The American Legion’s Citizens Defense Training Program, in the May 1942 issue of The American Legion Magazine. “If we don't, we shall be in a sorry mess, for at any moment this war may crash down from the sky or through sabotage into our own backyards.”

The United States was less than two months into World War II when President Franklin D. Roosevelt personally accepted National Commander Lynn Stambaugh’s offer to use Legionnaires and posts to train others to qualify as plane spotters and air-raid wardens. Soon was born The American Legion Citizens Defense Corps Training Program. Among its goals was to have more than 1.2 million trained air raid wardens in place across the country. With just about 1 million members at the time, the challenge would require training others.

“It’s our special assignment in this war and one of our contributions to victory,” Murphy wrote.

In the months ahead, as more than 150,000 members of The American Legion (World War I veterans and career officers) returned to wartime service, nearly 400,000 local Legionnaires became air-raid wardens and trained others in their communities. American Legion posts were staging areas for all forms of wartime civil defense, which included a massive ramp-up in specialized firefighting training in case of incendiary bombs, procurement of gas masks in case of chemical attack, and orderly evacuation procedures should they be needed.

The American Legion worked in collaboration with the U.S. Office of Civil Defense to fill local emergency-response gaps and lead community protection programs. The OCD authorized a 72-page textbook and curriculum prepared by The American Legion for air-raid warden training programs nationwide.

“We want America strong enough to meet any possible attack before it arrives and to turn the enemy back so that our homes remain intact and our families secure,” American Legion National Defense Committee Chairman Warren Atherton told the National Executive Committee of The American Legion. “We urge the members of The American Legion through their posts to tender their service to local councils of defense as observers, auxiliary fire fighters, air raid wardens, and in the performance of every type of service set up by those organizations in their respective communities.”

The NEC authorized the display of official civil defense insignia on American Legion uniforms while performing their duties.

By the war’s end, The American Legion had fulfilled the mission given by the White House in February 1942 to such a degree that the organization called for an indefinite continuation of the program as other emergency wartime programs across the country were folding tent at the time.

“Under conditions of modern war, the training of civilians to be able to care for themselves and their property during attack is almost as important as that of training military personnel,” the Civil Defense Committee reported to the 27th National Convention in 1945, calling for a nationwide corps of posts that would lead emergency-response efforts in times of war or of peace.

Hundreds of local posts continue to lead civil defense programs and work with local, state and federal authorities – and with VA medical facilities – to coordinate efforts should the need ever arise.