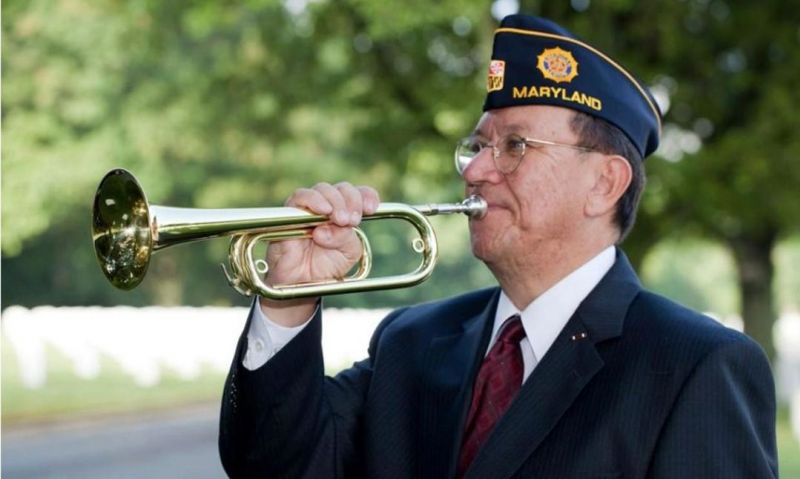 On Memorial Day, Jari Villanueva stood in an area of grass that overlooked Baltimore National Cemetery and played taps. The Legionnaire was among thousands of Americans who sounded the call at 3 p.m. local time for the “Taps Across America” initiative – a way to still remember and honor the military men and women who paid the ultimate sacrifice for the United States when Memorial Day ceremonies across the country were canceled because of the current pandemic.

Villanueva – a retired master sergeant who played the bugle for 23 years with the U.S. Air Force Band at Arlington National Cemetery – helped initiate “Taps Across America” along with CBS News “On the Road” correspondent Steve Hartman. The overall idea was to have the playing of taps, the National Song of Military Remembrance, to coincide with the National Moment of Remembrance when Americans are asked to pause at 3 p.m. local time on Memorial Day “to remember those who have died in military service to the United States.”

“We wanted people to gather in their neighborhoods, to not make it a public event but make it a community thing where people would play the call from their porch, their driveway or lawn,” said Villanueva, a member of American Legion Dewey Lowman Post 109 in Halethorpe, Md., and co-founder of Taps for Veterans where buglers and trumpet players perform taps for military veterans funerals and ceremonies. To draw attention to the movement and gauge participation, Taps for Veterans sent an email to its distribution list that asked for people to register on www.tapsforveterans.org. As word began to spread, CBS aired a segment about participation in “Taps Across America” and that added to the “snowball” effect, said Villanueva.

“I’m really proud and really in awe of all the people who performed (on Memorial Day),” Villanueva said. “Makes me proud to be an American.”

Videos have been uploaded on social media of people playing taps on the bugle and trumpet, as well as the flute, clarinet, violin, saxophone, trombone, French horn and bag pipes.

“It’s amazing and very rewarding,” Villanueva said. “It’s a great piece of American music and now everybody wanted to be part of it.”

Congress designated taps, the bugle call that U.S. military servicemembers have used since the Civil War, as the National Song of Military Remembrance in 2013. Villanueva was part of the efforts to get the bill passed, which started with a resolution in 2009 from the organization Taps 150 that commemorates the famous call.

As videos and photos continue to come in, Villanueva said the response has been of gratitude.