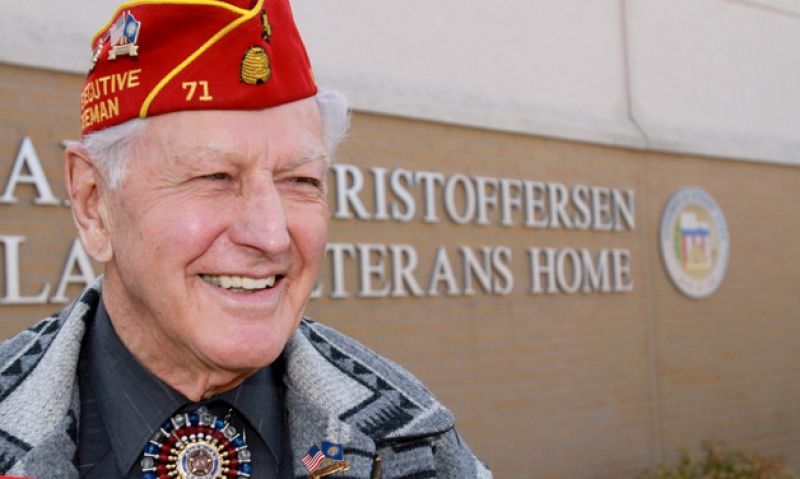 Christoffersen was a member of The American Legion for 75 years. He held numerous national and department offices, including serving as a member of the NEC from 1963 to 1973 and again from 1975 to 2013.

“He was a tireless advocate for The American Legion,” said Utah NECman Terry Schow, citing Christoffersen’s role in creating the state’s first veterans home. “He was involved in much of what we have done in Utah.”

At the ceremony, Christoffersen said getting a veterans home built was a project that spanned from his tenure as department commander in 1959 through his years as NECman and included many ups and downs. "This was an uphill battle for us, but we got it done," he said. "It takes all of us to make something like this happen. I just tried to get people to join in and help. It wasn’t up to one person. It was up to everyone."

In August 2013, Christoffersen, a member of Post 71 in Salt Lake City, received an honorary plaque and recognition by then American Legion National Commander James Koutz at the national convention. "It's been a big part of my life," Christoffersen told his fellow NEC members. "There are times when you ask, 'Is it worth it?' I say yes, it is."

After he retired from the NEC, Christoffersen’s heart was still heavily invested in the Legion. “He was all apologies. ‘I’m so sorry, Terry. I wish I could do more,’” Schow recalled him saying. “It kind of breaks your heart because he’s in his 90s and he’s given more than 50 years to the Legion but he apologizes because he can’t do more.”

Schow credits Christoffersen with being a trusted mentor, adviser and friend.

“He was a living legend; a great man,” Schow said, who served as alternate NECman when Christoffersen was NECman. “He was a great example to us.

“It’s humbling to be asked to speak at the funeral of this great man. I consider this a tremendous honor.”