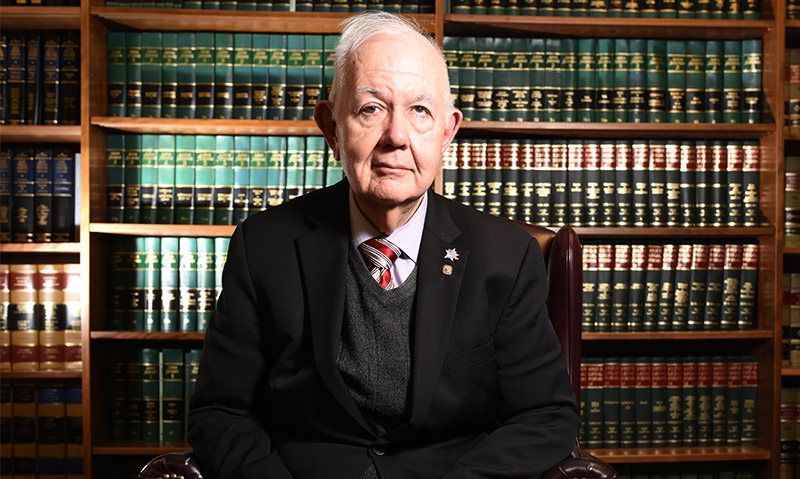 Philip B. Onderdonk Jr., who served 35 years as American Legion national judge advocate, passed away June 1 after a valiant battle with cancer. He was 77.

The U.S. Army veteran of the Vietnam War and member of American Legion Post 183 in Parkville, Md., retired in 2018 from the national office he had held since 1983. He was the eighth national judge advocate in the organization’s history and the longest-serving constitutional officer.

As chief legal counsel for The American Legion, Onderdonk Jr. ensured that the organization’s National Constitution and Bylaws were upheld; the American Legion emblem was protected; national meetings were properly conducted; contracts and media releases were reviewed for legal compliance; and friend-of-the-court – amicus curiae – briefs were filed in support of positions, policies and resolutions from the nation’s largest organization of wartime veterans.

Onderdonk Jr.’s work to protect military and veterans memorials and monuments that contain religious symbols was nationally recognized in 2015. That year, at The American Legion National Convention in Baltimore, Liberty Legal Institute presented him with the first Philip B. Onderdonk Jr. Religious Freedom Award, which continues to be presented annually by the institute.

“This award is for those that have given sacrifice and had success in defending what our founders called our first freedom – religious freedom,” Liberty Legal Institute President and CEO Kelly Shackelford said when Onderdonk Jr. was surprised with the first award named in his honor. “(Onderdonk) has been instrumental in leadership and what The American Legion has done in standing to defend attacks against veterans memorials across our country.”

During his tenure, Onderdonk Jr. was also deeply involved with legislation that created the U.S. Court of Veterans Appeals in 1988, giving veterans judicial recourse to dispute VA disability claims decisions.

“Phil was a friend who would do anything in the world to help you when needed,” American Legion National Adjutant Daniel S. Wheeler said. “He was loyal, loved The American Legion, and was a kind and gentle man. He had a great sense of humor and loved telling the same jokes over and over. It was part of his charm. I will miss him.”

U.S. Navy veteran Kevin J. Bartlett was appointed national judge advocate on Jan. 1, 2018, to succeed Onderdonk Jr. “On June 1, 2020, The American Legion lost a great man who I was fortunate enough to call my colleague and friend,” Bartlett said. “From the first time we met in 2002 until the last time we talked, we had numerous conversations, debates and discussions regarding so many legal issues. I will miss him and those talks.”

Onderdonk Jr. continued to serve as a legal consultant for the organization until August 2018.

At the time he announced his retirement, Onderdonk Jr. reflected on his time with The American Legion National Headquarters. That interview and video can be viewed here.