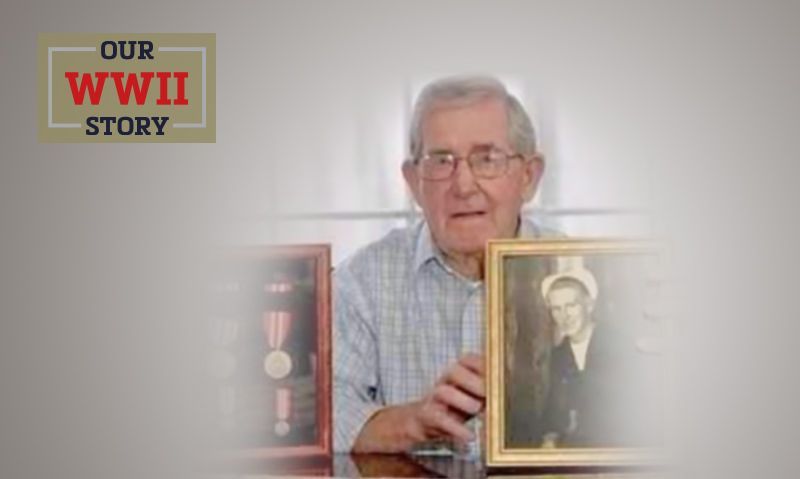 [Editor's note: read all the submissions to the "My WWII Story" category on Legiontown here.]

Like many children who grew up during the Great Depression, I had a very modest upbringing in the farm country of Long Island through the 1930s. I was 1 when it began. I have some memories of my father but he was not really in our lives growing up. My mother, Evelyn, loved us and did all she could for her three boys, who remained very close. Joe was the oldest and Jerry was the youngest. I was the middle son who everyone called “Jack” and many still do to this day. I was 13 when my mother decided to move us all north from Long Island to Waterbury, Conn., in 1941. Waterbury was a progressive industrial city in those days and had more opportunities as one of the largest brass-manufacturing cities in the world.

Soon after we moved to Waterbury, the United States entered World War II following the sudden attack on Pearl Harbor. My older brother Joe had already joined the Army as a paratrooper in the 82nd Airborne. I was too young to enlist but had hopes of joining the Navy when I became of age. I visited the Navy recruiter in May 1944 at 16 but they told me I had to be 17 to join the Navy. I was discouraged until I heard I could join the Merchant Marines. So it came to be that I left high school with my mother’s blessing and joined the Merchant Marines as a 16-year-old in 1944.

I did three months of training at Sheepshead Bay in Brooklyn before I was assigned my first Liberty Ship in September 1944. The ship was SS Michael Moran. Most of the crew were seasoned deckhands. I was the youngest by far. They could see I was a hard worker and they made me feel welcome right away. The ship was one of thousands of Liberty Ships designed and built to bring the U.S. war effort across two oceans. It was an impressive ship with five large storage areas called “holes.” Each “hole” was two stories deep and could hold tons of cargo. The ship was also equipped with a three-inch gun on the bow, a five-nch gun on the stern, and eight 20 mm machine guns. I was assigned to one of the 20 mm guns as a “feeder.” That was quite a thrill. We would hold practice drills with the Navy gunners who were onboard to man the artillery. I remember every third bullet was a tracer round that lit up the sky to show the path of the bullets. It was a sight to see.

We got underway from Boston Harbor with a full load of Army trucks and k-rations to take to Cherbourg, France. When we got to open water, we met up with dozens of other U.S. ships from the south and formed a large convoy that would cross the Atlantic together. The convoy was around 60 ships with a radius of over 5 miles. It was impressive. The cargo ships were positioned in the middle of the convoy while the U.S. destroyers and Canadian Corvettes defended the perimeter against the constant threat from German submarine attacks. You would often hear depth charges being dropped to fend off the German U-boats.

We finally arrived in Cherbourg safely and began the work of unloading the cargo. I was struck to see German prisoners of war on the docks. They were brought there as laborers under close supervision from the U.S. Army. I have a vivid memory of getting up close with one of the German prisoners. The head of our deck crew sent me to secure the ship to dock with another line. I left the ship dockside and began rigging up another rope to secure the ship to the dock. The rope was soaking wet which made it very heavy to hoist by myself. One of the G.I.s guarding the POWs saw me struggling and ordered a German prisoner to help me. Before I knew it, a captured German POW came over and began helping me. He was about the same age as me. We finished the job together in no time. I thanked him and returned back to my ship. It was just a brief encounter but it has always stayed with me. It’s funny how things happen sometimes.

Upon leaving Cherbourg, the empty Liberty Ship was sitting high in the water. This was a position of safety. A Liberty Ship sitting low in the water was a clear signal to the Germans that the ship ,was full and made it a prime target for U-boats. I was reminded after the war how deadly those waters were. Just after we left Cherbourg, a converted transport ship, SS Leopoldville carrying 2,235 Allied soldiers, was arriving in Cherbourg on December 24. The transport ship was torpedoed by a German U-boat less than 5 miles off the coast of France where we had just left. We never knew because the War Department kept the tragedy a secret. They waited until after the war to confirm Léopoldville was sunk by the German Submarine U-486, killing 763 American soldiers from the Army's 66th Infantry Division on Christmas Eve 1944.

I returned to the States to board my second ship, SS Paul Buck out of Portland, Maine. We were bound for Marseille, France, but this time there was no convoy and no escorts. We were a lone vulnerable ship with a full load of cargo. We traveled in a zigzag course to avoid detection from German U-boats. I recall that once we were underway, there wasn't a lot to do. Thankfully there were always colorful seamen on board quick with a story or two to help pass the time. I enjoyed listening to the stories of the "old sailors." I still remember one in particular who could hold us spellbound. He would often sing an old song from World War I. The song impressed me so much that I can still remember it to this day.

I turned 17 in Marseille while on Paul Buck. We unloaded in Marseille, and took on a full cargo of medical supplies bound for war-torn Poland. We traveled through the North Sea. While en route, we saw waves of Allied bombers and fighter planes returning from their raids on Germany. I recall the thrill when some of the fighter planes would tip their wings acknowledging us. The trip was long but our route was shortened considerably because the Russians had taken control of the Kiel Canal in East Germany. Allied vessels could now use this canal which saved us many hours at sea on our way to Poland where we delivered our cargo.

After another trip to Hull, England, I was assigned to SS Thomas Clyde. This ship had the best crew of any Liberty Ship I was on. We sailed to Buenos Aires to deliver supplies there and then had orders to go to Antwerp, Belgium. This ship was memorable to me because while on board, we got the news that the Germans had surrendered to the Allies. The war was over in Europe! I remember how happy we all were as the crew and I celebrated V-E Day together at sea.

We arrived empty in Antwerp and took on a full load of ammunition. Although the war in Europe was over, the fight against the Japanese was far from over. We were still waiting for official orders, but I suspected we would be sent to the Pacific where the ammunition was needed. I remember having a really bad feeling about taking that trip. I knew if we delivered a full load of ammunition to the Pacific, we would be a prime target for the Japanese and the kamikaze pilots we had heard so much about.

We did not know it at the time, but while we were in Antwerp waiting for our orders, President Harry S. Truman's heavy cruiser USS Augusta was also in port only two berths from our ship. Truman was traveling to attend the Potsdam Conference with Winston Churchill and Joseph Stalin to establish the postwar order. It was there that Truman informed the Allies of "a powerful new weapon" and formally proclaimed to Japan to surrender unconditionally or meet "prompt and utter destruction". Japanese Prime Minister Kantarō Suzuki did not respond and 11 days later the United States dropped atomic bombs on Hiroshima and Nagasaki. Japan surrendered on Aug. 15, 1945. Suddenly, World War II was over. We were then given our orders to deliver the load of ammunition. The orders were to Swanson, South Wales.

I feel to this day that had the war kept raging with Japan, our orders would have been different and Truman’s decision took us out of harm's way. It may have saved my life and the lives of our crew. We know it saved the lives of thousands of U.S. servicemen who were faced with the invasion of mainland Japan. For that I am grateful. Merchant Marines paid a terrible price during World War II. They died at a rate of 1 in 26. That was the highest rate of casualties of any service. All told, 733 American cargo ships were lost in troubled waters. I know the war would not have been won without the service of the Merchant Marines, many who made the ultimate sacrifice.

I remained in the Merchant Marines until 1952 before I married and settled down in Connecticut. My wife, Teresa, and I raised seven children, have 13 grandchildren and 13 great grandchildren. Outside of my family, nothing in my life has been as significant to me than the time I spent as a Merchant Marine during World War II. We were all part of something bigger and our country came together like never before to win over tyranny. I was very lucky. I lived to tell about it.