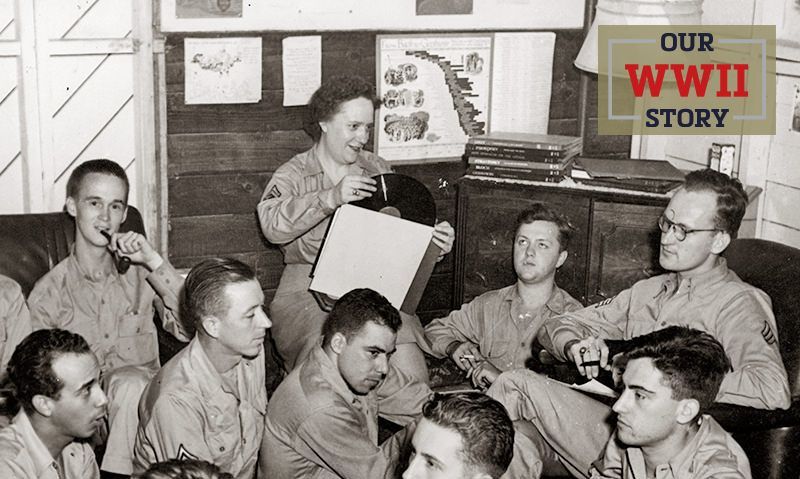 Nearly every page of the July 1942 National Legionnaire contained a call to action. In large type on the front page howled the words: 37 MILLION RECORDS IS GOAL.

A two-week kickoff campaign was conducted between July 17 and Aug. 2, 1942, and called on American Legion Family members everywhere to “move into action with a national house-to-house canvass, urging neighbors and friends to scour attics and cellars for old phonograph records. It is estimated that some 200 million discs of this type are stored in American homes.” They hoped to hit the goal on the first drive.

The initiative was called “Records for Our Fighting Men,” and was one element of President Franklin D. Roosevelt’s Committee on War Relief Agencies; the nonprofit corporation was the brainchild of such music stars as Gene Autrey, Kate Smith, Fritz Reiner, Sigmund Spaeth and Kay Kyser. The concept was to collect old record albums, send them in to be ground and recycled and use revenue from the scrap material to make new ones for the troops. An American Legion contract with the Columbia Recording Co. and RCA-Victor – stated that the new records would be manufactured at factory cost and sent to deployed U.S. military personnel and those hospitalized overseas. Phonograph players also were to be sent through the program.

“I can’t claim to know everything that goes on in the minds of fellows in uniform,” big-band leader Kyser wrote in the National Legionnaire. “But I’ve played a good many camps, and I know they’re hungry for music. It’s one of the big ties with civilian life.”

Warehouses were used in Oakland, Calif.; Bridgeport, Conn.; Camden, N.J.; and Chicago to collect the records of the first drive. Only about half of the nation’s posts and units participated in the somewhat hastily called campaign, but records were still pouring into the warehouses in September 1942 when National Headquarters called on posts to send any records they had in by Oct. 1. A second drive was looking likely. By the end of September, the number of records collected by Legionnaires and Auxiliary members exceeded 11 million, enough to make some 370,000 new albums for the troops.

A second campaign began July 3, 1943 under the headline “Every Old Disc Must be Drafted for War.”

The American Legion Department of Pennsylvania had led the nation in collections through May 31, 1943, with 411,874 pounds of old records.

The 1943 second drive had stronger participation, with 43 of the 49 continental U.S. American Legion departments mobilizing teams to gather the vinyl, account for it and ship it. Hearst Newspapers – which would be a catalyst in the passing of the GI Bill in 1944 – threw its editorial might behind the record drive. Major department stores in San Francisco were collecting records for the program. Portland, Ore., Mayor Earl Riley – a Legionnaire – put the entire city on alert to donate their old albums to the cause. Louisiana Gov. Sam Jones, a past American Legion department commander, and Indiana Gov. Henry Schricker were among multiple state political leaders who issued proclamations or lent support to the effort, which had competition from commercial record collectors who paid cash directly to citizens for their old records.

The Department of Colorado enlisted the help of schoolchildren to haul 17,000 pounds of old records to its receiving station on the first day of the second campaign. That drive didn’t seem to have a specific end, but by June 1944, the two-year effort was credited with more than 6.9 million pounds of records – enough to make and send more than 500,000 brand-new ones to the troops.

The American Legion National Defense Committee reported in 1945 that, “Letters have been received from men and outfits in every theater of war expressing highest appreciation for the records. Each record shipped carried a label on which was printed, ‘Compliments of The American Legion and Records for Our Fighting Men, Inc.,’ so that everyone receiving them knew from whence they came.”

The program was moved fully under American Legion National Headquarters by the end of 1945 when the need shifted to wounded and sick veterans recovering in military and VA hospitals. That year, the American Legion Auxiliary presented $65,000 in cash to The American Legion in support of the program – which would be over $893,000 in 2020 dollars.

In 1948, the program was dissolved, all the money raised having been spent on more than 2 million new records delivered to troops overseas, recovering personnel and veterans in hospital care. It’s unclear whether or not the American Legion Family – either operating in association with Records for Our Fighting Men, Inc., or running the program itself later – ever hit the 37.5-million-record goal. And if they didn’t, it wasn’t for lack of promotion or effort.