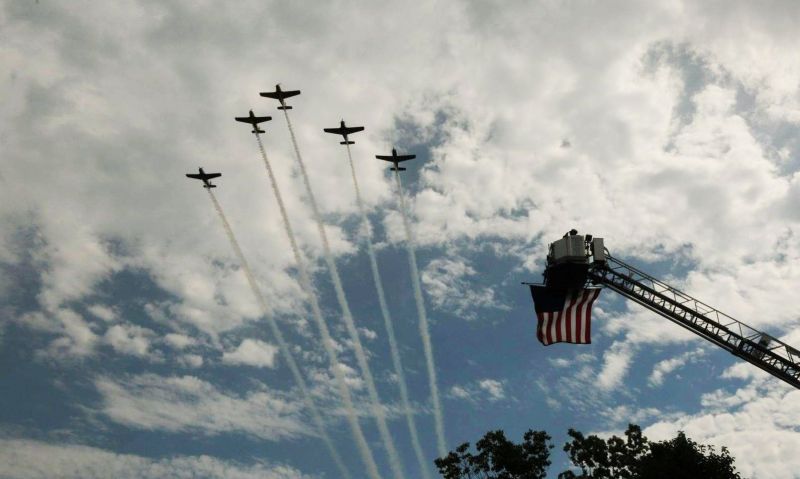 In a normal year, Edward W Thompson American Legion Post 49 in South Haven, Mich., is a part of what has been eight community Salute to Veterans in mid-August. The event includes free fishing on Lake Michigan for disabled veterans, a veteran-owned business expo, ceremonies and a military plane flyover.

But 2020 has been anything but a normal year, so Post 49 and others in South Haven decided to change things up a bit. On Aug. 15, a salute to local citizen heroes took place, honoring first responders, health-care workers, essential workers, business owners and those who have chosen to wear a mask and socially distanced during the pandemic.

The event also honored 2020 high school and college graduates who missed out on graduation ceremonies, as well as veterans who passed away during the coronavirus and were not given military burial honors during their funeral because of restrictions. The flyover, scheduled a year in advance, also took place.

“With all the disappointment and adversity, we thought 'why don’t we do something for the community,'” said 23-year Post 49 Legionnaire Bruce Thatcher, who helps organize the annual salute. “We already had the airplanes. With the adversity and the disappointment, there’s always opportunity.”

Thatcher said event organizers went down a list of those in the community impacted the most by the pandemic, citing those who chose to wear a mask and socially distance were the “first line of defense.” The list also included small businesses “that normally we would hit up to help with our Salute to Veterans,” Thatcher said. “But now they’re the ones that need the help.”

At around noon on Aug. 15, vintage World War II aircraft flown by the Hooligans Flight Team hit the skies over Grand Haven, passing over Post 49 almost at the exact same time the post’s honor guard was finishing up a 21-gun salute and the playing of taps to honor area veterans who’d passed away since early spring. In the post’s parking lot the South Haven Area Emergency Services aerial truck displayed a large U.S. flag. The post also hosted a breakfast the next day.

Thatcher said the flyover and post ceremony were an opportunity to forget about the pandemic for a little while. “We’re lacking on fun, just plain fun,” he said. “If it’s just for a few seconds when airplanes are flying over and everyone can look up … it was heart-warming.”

The following are a few examples of other American Legion Family members honoring others during the coronavirus.

American Legion Riders from Post 416 in Encinitas and American Legion District 22 were among those who took part in a surprise drive-by tribute to the residents of Veterans Village of San Diego. Watch video of the tribute here.

In Newton, Iowa American Legion Riders joined others in helping celebrate the 104th birthday of World War II veteran and prisoner of war Robert Clark, a resident of the Park Centre WesleyLife Community. Clark was taken prisoner by German soldiers on Jan. 17, 1945, in Alsace and kept at the Stalag 5A prison camp until it was liberated on May 16, 1945.

The family of Jim Dallas was looking for somewhere to host a 100th birthday party for the World War II veteran. Word got back to American Legion Post 626 in Gladstone, which wanted to help out.

"Well, Post 626 doesn't have a post home to share, but we do have community connections," Post 626 Commander Douglas Millison said via Legiontown. Millison reached out to the Veterans Committee chairman at Northland Elks Lodge 2376 in Gladstone, which offered to host the socially distanced party.

"It's great being able to work with others in the community to get things done, especially for such a special event as this," said Millison.